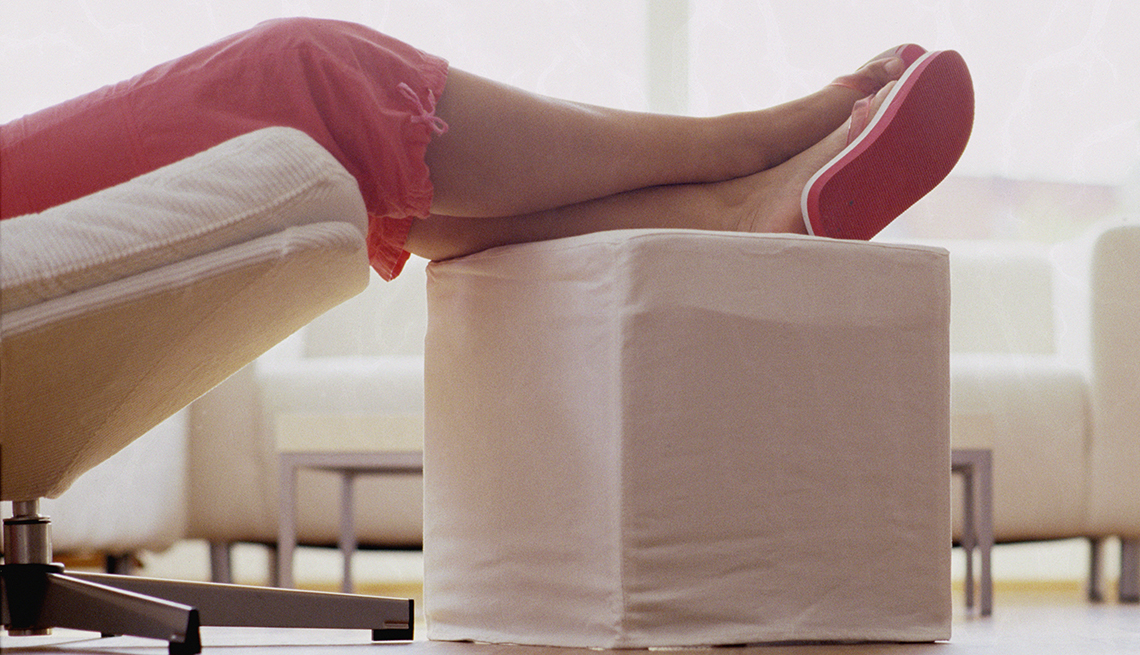 In a small study published in PM&R, the journal of the American Academy of Physical Medicine & Rehabilitation, researchers measured the discs of participants, all of whom had sedentary jobs, and found that prolonged sitting for as little as four hours resulted in disc degeneration. Plenty of research shows that adults who clock long hours of sedentary time every day can counter the risks by increasing the amount of physical activity they do.

“Set a schedule where you dedicate time focused on stretching and core strengthening, totaling half an hour to an hour, six times a week,” says Okubadejo. “Instead of sitting down for four hours straight, cut that time in half. After two hours, get up for five minutes of stretching, then go back to what you were doing.”

Yet another reason to kick the habit: Smoking limits blood flow, causing discs to age prematurely. In fact, the number one reason people who have had spinal fusion surgery — back surgery to connect two or more vertebrae in your spine — don’t heal is because of smoking, says Okubadejo. “A lot of insurance companies won’t approve back surgery for smokers for that reason.” That’s not all. Research suggests that smoking also affects the way the brain responds to back pain and makes people less resilient to it. As a result, suggests the findings of a study in the journal Human Brain Mapping, smokers are three times more likely than nonsmokers to develop chronic back pain. Over-the-counter pain meds, like nonsteroidal anti-inflammatory drugs (NSAIDs), helped study participants manage the pain but didn’t change the brain’s response to it.

3. The Culprit: Your mattress

That cushy mattress that makes it seem like you’re floating on a giant marshmallow may feel good when you slip into bed each night, but it’s not doing your back any favors. “If you use a plush mattress or an old mattress, the body tends to sink down, so there’s less support for the spine,” says Okubadejo. Beyond new, the best type of mattress for preventing back pain is one that’s at least medium-firm. In a small study published in the Journal of Chiropractic Medicine, participants were asked to keep a log of their back discomfort and sleep quality for 28 consecutive days on mattresses that were at least five years old. They were then asked to do the same for another 28 days, sleeping on a new, medium-firm mattress. Participants’ lower back pain improved consistently over each of the four weeks they slept on the new mattress.

Anybody who wears high heels knows they can do a number on your back. Turns out, even sensible shoes can change your gait and lead to back pain if the soles are uneven, which happens when you’ve worn them too long. “Think about your shoes the way you think about your mattress,” says Chhatre. “We talk about the support you need while lying flat; you equally need support while being upright.”

Look for shoes with soles that provide medium firmness and provide proper arch support. If you wear soft-sole shoes, “you might feel like you’re absorbing some of the impact, but if they’re too soft, you’re introducing instability,” he says. “The nerve endings in your feet provide a sense of balance, but even your nerve endings aren’t going to know how to provide support in a too-soft shoe.”

Stress wreaks all kinds of havoc on the body. No surprise, it can also put the squeeze on the muscles around your spine. “People usually carry stress in the neck and shoulder area,” notes Chhatre. But stress can also cause pain to travel farther down the back, thanks to the inflammatory response it sets off.

Say, for instance, you have a torn disc but aren’t showing any symptoms. Chronic stress can provide the “on” switch for the release of inflammation-causing molecules throughout the body. Inflammation, in turn, “opens the floodgates for pain,” says Chhatre.

To fend off this kind of pain, moving is particularly important, Okubadejo says. “If you’re stressed, you may not be as active. If you’re less active, you may have pain, and if you have pain, you’re stressed out.” As far as which exercise is the best remedy, he says it’s all about the “release of endorphins,” whether you opt for a long walk, a short run or strength training. Stretching, he notes, can help take the edge off, too.

MARQUETTE — There’s never a bad time to think about your mental health: Where it stands, how you can improve it, and where to go for help if you need … END_OF_DOCUMENT_TOKEN_TO_BE_REPLACED