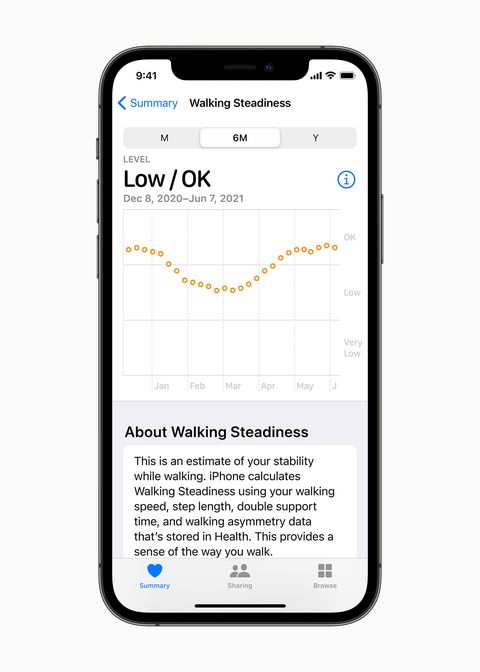 Apple’s next mobile operating system, iOS 15, will release widely this fall. When it does, one of the software’s most important new features will have nothing to do with FaceTiming, messaging, or browsing the internet on your phone.

Walking Steadiness, which was first announced during the brand’s WWDC event earlier this June, will give iPhone users of all backgrounds a tool to gauge how well they move on their feet—and potentially identify negative trends before they can develop into bigger problems, which might cause accidents like falls.

While mobility and falls might not be considered to be a major public health issue by the layman, three million older people (65 years and up) are treated in emergency departments for fall injuries, according to the CDC. Other health problems can cause mobility concerns in other populations as well, and walking unsteadiness can be a symptom of everything from neurological conditions to joint problems.

Catching a decline in mobility before calamity can be an essential preventative step to improve the health conditions of people in all walks of life. The feature uses the iPhone’s built-in sensors and a specialized algorithm to assess the user’s balance, stability, and coordination as they move and walk. This isn’t the type of add-on that will only be used to actively track standalone exercises like a wearable device; instead, Walking Steadiness will be able to capture large amounts of data passively over time and identify trends (just as long as the user carries their iPhone on their person).

That data can then be shared with family members and physicians using the Health Sharing feature also debuting with iOS 15, giving care teams access to a trove of information that doctors typically don’t have through standard protocols. Usually, doctors only see their patients during appointments, and unless there’s a major reason to test mobility, the question of how they’re getting around might not even come up for discussion. Even then, gait tests often take place in a lab setting using specialized equipment, creating another barrier to receiving care.

“If a person comes to see me, I have just a limited snapshot into what’s [going on],” says Dr. Richard Milani, physician and Chief Clinical Transformation Officer for Ochsner Health System. “Now we have a real time feature, as opposed to just this little brief episode when they’re in an office setting.”

Walking Steadiness isn’t meant to make any particular diagnosis; instead, its purpose is to capture data to give users—and importantly, their care team—important information about their health which can then be used to determine a treatment plan. For example, even if the patient in question doesn’t alert their doctor about their mobility issues, someone like a grandson could notice a negative trend and raise the issue for a physician if the Health Sharing feature is enabled.

The impetus for Walking Steadiness came during the development of another Apple health feature: Fall Detection, which launched on the Apple Watch in 2018 as an emergency lifeline for wearers. “We just looked at a ton of data, while looking at fall detection couple years ago,” says Ron Huang, Apple’s Senior Director of Sensing and Connectivity. “We just knew that sort of the next step to that is not just get you help when you fall, but of course prevent it from happening in the first place.”

Understanding Walking Steadiness is simple by design. The feature collects data using the iPhone’s sensors then provides a score to grade movement: OK, Low, or Very Low. This score was developed using the Apple Heart and Movement Study, which drew from data provided by 100,000 participants of all ages—Apple claims this is the largest data set ever used to study fall risk. Huang says that another, more focused study featuring 2,000 participants who were 55 years and older was also used to develop the feature. Data from users who walked with the phones in all types of ways was also used, according to Huang, since people commonly hold their devices in pockets, purses, and in their hands. 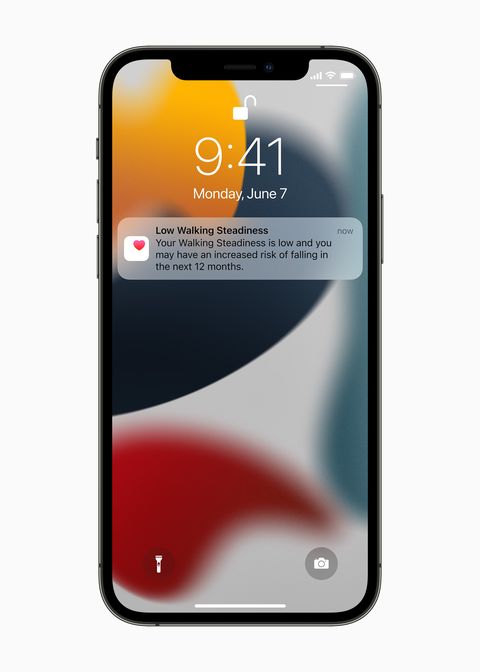 Users can also dig deeper to see the numbers behind the classification, which Huang calls a “raw score” ranging from zero to 100. “Not only is it insightful, but after people sort of do something about it, like do an exercise or do training to help themselves, they get to see that gradual improvement, which can be super encouraging to continue on as well, too,” he says. Along with the scores, the Health will prompt users to try a range of exercises led by Apple Fitness+ trainers developed from the Otago Program, a well-known physical protocol used to reduce falls in older populations.

For Milani, the Walking Steadiness feature helps to fill a need within a multimodal fall prevention program he’s been developing. He and other physicians have methods they can use to treat the underlying causes behind mobility issues, but they’ve needed a means to gauge the effectiveness of those treatments.

“This was really important for us in terms of a missing link, just to be able to see how effective we are,” he says. “What I need is a real-time measurement out in the field, so to speak, to see who’s got the problems and who’s benefiting from the intervention and who’s not. That’s where it’s gonna be really helpful for us.”

Walking Steadiness will come to iPhones (from the iPhone 8 and later) everywhere when iOS 15 is released later this fall.

MARQUETTE — There’s never a bad time to think about your mental health: Where it stands, how you can improve it, and where to go for help if you need … END_OF_DOCUMENT_TOKEN_TO_BE_REPLACED