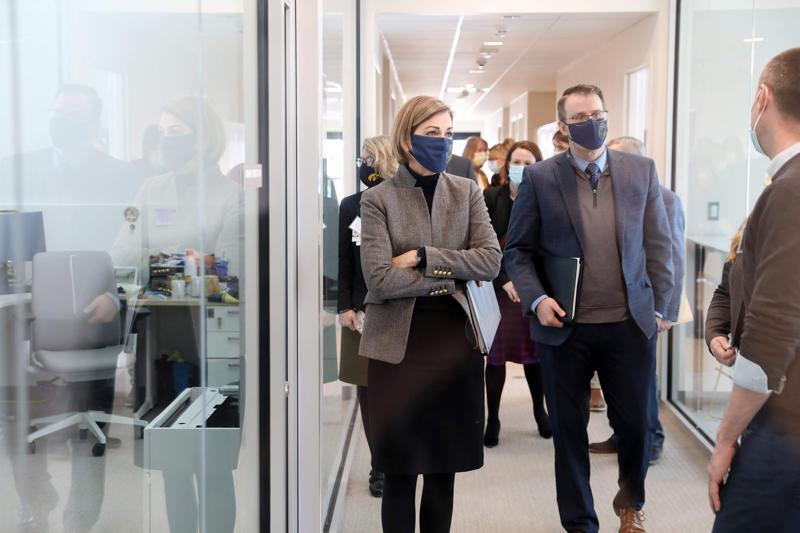 Gov. Kim Reynolds on Feb. 11 tours the GuideLink Center in Iowa City. The center provide crisis evaluation, observation and stabilization to those experiencing a mental health or substance use crisis. Reynolds championed a change, approved late in the legislative session, that over two years shifts mental health funding from local property taxes to the state. The bill envisions performance-based contracts with Iowa’s 14 mental health care regions to foster better access across the state to mental health services. (Liz Martin/The Gazette)

DES MOINES — With little input and limited notice, parents, advocates, providers and local government officials are beginning to piece together a revamped mental-health service delivery system that will be financed by state dollars rather than property tax levies.

In the closing days of the overtime 2021 legislative session, Gov. Kim Reynolds and majority GOP lawmakers passed a major tax-policy package that included a provision to shift funding of Iowa’s regionally based mental-health system from county property tax levies to the state’s general fund over a two-year transition.

Reynolds has hailed the change as “a huge win” and the final piece in efforts to improve Iowa’s mental-health system for adults and children by providing a stable, sustainable funding source while bringing more statewide equity and uniformity to the core services being offered.

“I’m really excited about it. It’s the right thing to do, ” the governor recently told Statehouse reporters, noting that stresses brought on by the COVID-19 pandemic have exacerbated the need for quality, accessible mental-health services for Iowans at all levels in all 99 counties.

While there generally is broad agreement that long-standing challenges must be addressed, county leaders and some mental-health advocates say they face a number of uncertainties heading into this phased-in change, not the least being the state’s less-than-stellar record in keeping the financial commitments it makes.

“We raised a lot of concerns and we still have those concerns about the state keeping up their commitment,” said Jamie Cashman, government relations manager for the Iowa State Association of Counties.

“We weren’t objecting to going to a primarily state-funded system. We had no issues with that,” he noted. “Our concern was taking the ability away from the county to levy when we still believe that when we get into lean times that would be a possibility for the state to cut. So we wanted to at least have it for the counties to still be able to levy if need be to ensure the continuity of services and not having to have dramatic increase on property tax if the state should place the burden back on counties.”

For years, the amount a county could levy in property taxes for mental health programs has been capped at a maximum per capita rate, which statewide generates up to $116.8 million annually, according to the Legislative Services Agency. Under Senate File 619, which awaits Reynolds’ expected signature, the maximum levy will be cut about in half in fiscal 2022 and eliminated in fiscal 2023.

Since fiscal 2022 county budgets already have been certified, those that levied above the new limit will be informed by the state Department of Management they have to lower those levies. Legislators appropriated $60 million to cover the difference, or counties also could use reserves meant for the services, Cashman said.

The 14 regions that oversee Iowa’s mental-health service delivery system will be able to supplement their levied revenues with reserve funds that totaled $72.5 million at the end of fiscal 2020 for the next two years.

State officials also plan to devote savings from phasing out the $152.1 million in “backfill” payments the state has been making annually to cities, counties and school districts since approving a 2013 commercial/industrial property tax cut that reduced their revenue. Legislators also raised the state share of aid to K-12 schools from 87.5 to 88.4 percent as part of the deal.

Backers of the shift to state funding of mental-health services say the “backfill” payments were not meant to be permanent. Local officials, however, differ on that promised revenue stream that now is slated to be phased out over five to eight years depending on the economic vibrancy of various localities.

Currently, the state budget is in a surplus position and Iowa governmental entities are in line to receive considerable amounts of one-time COVID-19 relief dollars for the short term. But local officials, advocacy groups and some legislators point to the state’s record of funding the court system, K-12 schools and other budget areas over the years as a source of future concern if tough economic times set in and spending commitments have to be cut.

“I think it’s a mistake to take away local funding,” he added. “When you pull the money away, you also will sideline the people who have made the system and built this system. In my view, this local funding is really the glue that holds the system together and makes it accountable to people for actually providing good services.”

However, Peggy Huppert, Iowa executive director of the National Alliance on Mental Illness, said she believes the coming changes will have a positive impact overall. It will encourage more cooperation and collaboration among the regions under the state umbrella, she said, and hopefully provide more money on a reliable per capita basis that is needed to make recently enacted reforms a reality for the system and the people and providers it covers.

“The important thing is that it’s going to be a known quantity,” she said.

While both Johnson and Linn counties are opening mental health access centers that provide alternatives to being taken to jail or a hospital emergency room, Huppert noted there are no similar access centers west of Interstate 35.

The new bill envisions performance-based contracts for the regions that include incentives and capped growth factors administered by the state Department of Human Services. That may not translate into expanded service options in all parts of the state, Huppert said, but should establish an expectation that necessary services for complex adult and children’s needs will be made available within a reasonable radius of all Iowans.

While the mental-health system overhaul legislation surfaced in late March and was headed to the governor’s desk is less than two months, Huppert said she would “push back” against the idea that the proposal was not fully vetted, given that funding has been an issue since she joined NAMI five years ago.

“This discussion has been ongoing because we’ve known for a long time that this way of funding the mental-health system was not working” with property taxes, she said. “I don’t think this was sudden or rash,” she added, but she confided she was pessimistic that a proposal would get approved during the 2021 session.

Huppert said she understands the anxiety that comes with change, but noted that maintaining the status quo implied “that the system that we have right now is working really well and it’s not. It is dysfunctional, it is inadequate and it is not sustainable.”

Leslie Carpenter, an Iowa Mental Health Advocacy official, said she was happy to see Iowa adopting a more stable funding system and increased oversight for core services that have been mandated but not financed.

“I think it’s going to be a bumpy road, but no change is easy,” she added. “Sometimes you have to recognize that the current system isn’t working and perhaps instead of fighting, fighting, fighting against any change to it maybe we should be embracing it and trying to offer our support to help it to succeed.”

Lisa Green-Douglass, a Johnson County supervisor who has been involved with mental-health issues in the east-central mental health region, said local officials have been trying to make improvements and meet mandated services that vary from region to region and county to county with no help or funding from the state.

She said it appeared the state’s solution to meeting the funding obligation is a plan to “rob Peter to pay Paul” by removing the local property tax levy for mental health care and replacing it with “backfill” money that was intended to reimburse counties, cities and schools for lost revenue from the 2013 cut in commercial/industrial tax rates.

“It’s a bad idea all the way around,” she said. “Time will tell what will happen but I don’t have a great deal of confidence in their ability or their promise to do this forever.”

Green-Douglass said Johnson County has done a good job keeping tax levies relatively unchanged from year to year but she worried that could change if the county’s revenue from the state gets shorted and forces a tax increase to make up the difference.

The Johnson County supervisor also said the revamped system will have an oversight board but she noted that county representatives on the governance panel won’t have leverage, sway or vote in influencing policy decisions.

“They gave us local control, and now they’re taking it away,” she added.

Mental-health service advocates said they expected local and county leaders to stay engaged under the new governance and funding arrangement and they downplayed concerns the move could eventually result in an effort to privatize the system, similar to Iowa’s Medicaid program.

“Logistically, I think that would be very difficult and there aren’t a lot of businesses doing that across the country,” said Carpenter in addressing future prospects for a privately managed mental-health service delivery system.

Cashman said one unknown element is how regional employees will be funded and whether they will stay county employees, become state employees or be under some form of contract. Other elements to be addressed are funding of current regional office space and the status of county auditors who act as financial agents for the regions.

The statewide association of counties requested that counties be given a year to work through issues before the transition period began; that they be allowed to maintain limited tax levy authority to deal with unexpected shortfalls; and that the state-based funding system be constitutionally protected. But none of those things happened when the compromise was negotiated by the governor and GOP leaders behind closed doors.

With expectations SF will be signed into law soon, Cashman said association officials are assembling a small work group of county supervisors, auditors and other officials to maintain service expectations and to address issues as they arise during the transition.

“We are committed and we are positive about bringing all of our folks together to work through this transition,” he said. “Will it be bumpy? We assume probably in different things, as you go through a major overhaul on how things are funded and so forth. That’s why we’re putting this group together because we’re committed to making sure that if there are bumps in the road that we get it smoothed out as quickly as possible. We’re not throwing up our hands, taking our ball and going home. Quite the opposite. We stand as willing partners to work with the counties and the regions and DHS and the providers and so forth, we just want this to go as smooth as possible.”

MARQUETTE — There’s never a bad time to think about your mental health: Where it stands, how you can improve it, and where to go for help if you need … END_OF_DOCUMENT_TOKEN_TO_BE_REPLACED