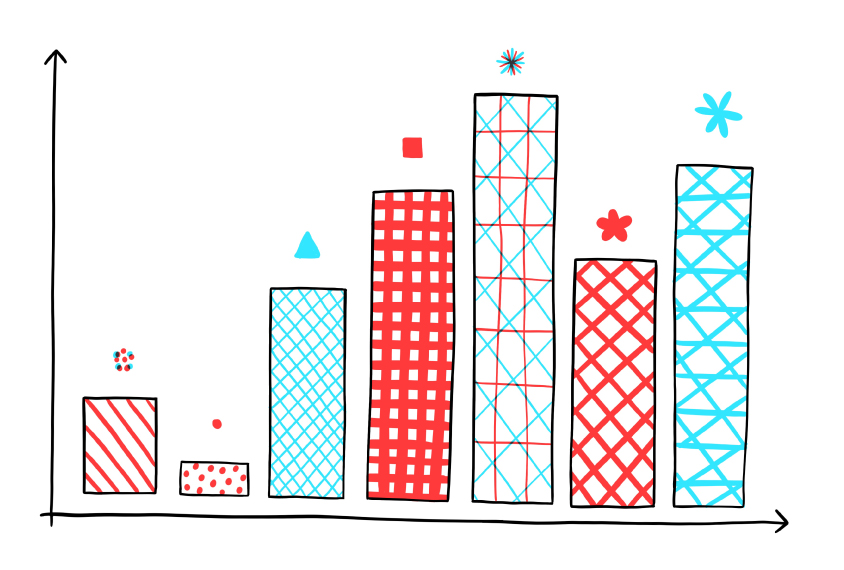 Welcome to the second edition of the By the Numbers Newsletter. At Spectrum, we do our best to summarize the latest autism research findings — and sometimes the best summary comes in the form of a chart or map. In this newsletter, we boil down interesting new research that is conveyed most succinctly by way of simple data visualizations.

Let us know what you think of the newsletter, or tell us about your own data-rich work, at news@spectrumnews.org.

People with autism frequently switch medications to control common co-occurring conditions, such as anxiety and attention deficit hyperactivity disorder (ADHD), according to a new study.

And about 30 percent of autistic people take three or more psychotropic drugs to manage those comorbidities, the study found.

“We were very surprised by the wide spectrum, and number of drugs, that are being used to treat the same comorbidity conditions, and how often those were changed in patients,” says Paul Avillach, assistant professor of biomedical informatics at Harvard Medical School, who led the study.

The new work analyzed insurance claims and filled-prescription records from roughly 27,000 autistic people enrolled in a large U.S. health insurance plan, and considered 24 commonly prescribed medications across three broad categories: medications that treat agitation and irritation; those that treat hyperactivity and ADHD; and those that treat mood and anxiety disorders.

Nearly half of the people in the dataset, 40.6 percent, were prescribed only one medication, whereas 29.1 percent had two, 16.9 percent had three, and 3.4 percent had five.

There was also little consistency in the medications prescribed by clinicians to treat the same co-occurring conditions. Among people with both autism and anxiety, 16.1 percent had been prescribed aripiprazole, 30.1 percent quetiapine and 13.1 percent risperidone.

The findings appeared in JAMA Pediatrics in June.

Access to autism care is scattershot across the United States. Children living in low-income, rural areas have particularly limited access to outpatient mental health treatment facilities that offer autism care, according to a new survey.

The researchers called 6,156 facilities listed in the Behavioral Health Treatment Services Locator of the Substance Abuse and Mental Health Services Administration, or SAMHSA, in December 2018. Only half said they offer care for children with autism. Those that do tend to be located near cities, with more non-white residents and more people living above the federal poverty line. Facilities that accept Medicaid or are privately operated are also more likely to offer mental health services to autistic children than are publicly operated facilities or those that do not accept Medicaid.

“We called every mental health facility in the country, which was a lot of work,” says lead investigator Jonathan Cantor, associate policy researcher at the RAND Corporation, a nonprofit think tank in Santa Monica, California. “In an ideal world, this would just be an additional question that would be asked by the government each year when they survey all mental health facilities.”

Cantor’s team published the results in Autism in June.

Autism behaviors changed during the pandemic

When schools closed during the COVID-19 pandemic and children with autism sat at home, many became more distracted and hyperactive, according to a new online survey of 200 parents and caregivers.

As of June 2020, 74 percent of the respondents said the pandemic has had a “moderate-to-large impact” on their child’s behavior. But that impact wasn’t evenly distributed:

Children in households with the lowest incomes were most likely to experience negative behavioral changes.

About 70 percent of the parents and caregivers surveyed said their child was more distractible and argued more frequently than before the pandemic; 66 percent reported increased hyperactivity; and about half said their child had more aggressive behaviors. The study relied solely on parent and caregiver reports, though, so these findings may be skewed.

Researchers reported the findings in Research in Developmental Disabilities in June.

9 times: The likelihood that a person with autism and intellectual disability will be hospitalized because of COVID-19, compared with people without the conditions, according to a study in the Journal of Autism and Developmental Disorders in May.

18 percent: The percentage of 12- to 18-year-olds, out of a group of more than 1,000, who were diagnosed with autism in 2016 while visiting a psychiatric emergency service in the Netherlands. Autistic girls who visited emergency services were more likely than their non-autistic peers to have anxiety. Autistic boys and girls both had more severe psychiatric symptoms than their non-autistic peers, according to the study, published in Autism in June.

1.5 times: The likelihood that a family with an autistic child experiences food insecurity because of financial strain, compared with families that do not have an autistic child, according to three years of data from the National Survey of Children’s Health. The findings appeared in Autism in June.

MARQUETTE — There’s never a bad time to think about your mental health: Where it stands, how you can improve it, and where to go for help if you need … END_OF_DOCUMENT_TOKEN_TO_BE_REPLACED