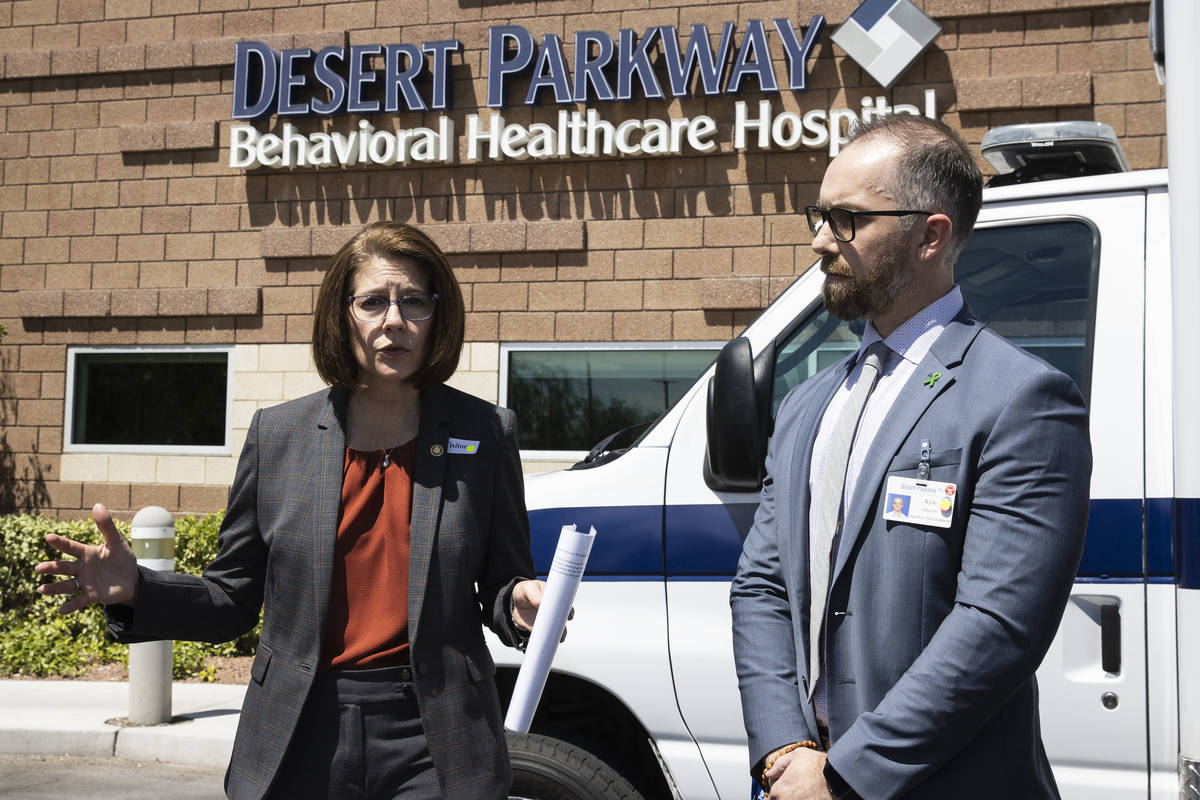 Sen. Catherine Cortez Masto met with first responders and mental health professionals at Desert Parkway Behavioral Healthcare Hospital in Las Vegas on Wednesday, following her introduction of a new bill designed to provide funding for and break down barriers to behavioral services for those suffering from a mental health crisis.

Cortez Masto spoke with members of the Las Vegas Fire Department’s crisis response team, a pilot program funded by one state and one federal grant in partnership with Desert Parkway that sends a team of emergency medical technicians, paramedics and a licensed social worker — instead of police or firefighters — to handle 911 calls related to mental health crises.

The team can transport a patient directly to Desert Parkway, whereas traditional first responders are required to first take the patient to a medical hospital.

“The collaboration between these two is the focus of the work that I have in Congress right now… to make sure there’s funding sources so that individuals, no matter your background, if you’re coming for mental health needs and services, you should be able to access them without being turned away because you can’t afford it,” Cortez Masto said in a news conference following a tour of Desert Parkway.

Cortez Masto, a Democrat, and Sen. John Cornyn, R-Texas, announced the introduction of the Behavioral Health Crisis Services Expansion Act on Tuesday. Cortez Masto said the bill would provide more grant funding for the expansion of programs like the Las Vegas crisis response team, with local oversight in place to account for the different needs of each local government.

The senator is also seeking to remove roadblocks to mental health care present in the country’s insurance system.

While Desert Parkway is currently contracted with Medicare, it cannot assist Medicaid patients aged 21-64, as that program does not pay for certain types of mental health treatment.

Trey Delap, a local policy advocate for the National Alliance on Mental Illness, told Cortez Masto the state recently got rid of this “institutions for medical disease” exclusion, but federal action is still needed.

Delap applauded the possible expansion of these mental health-related crisis response teams, saying they will also decrease the workloads of emergency rooms and the rate of police shootings during these types of calls.

Both noted the state continues to be at the bottom in the country in mental health access and suicide rates, and they thanked Cortez Masto for working to address this.

All of Texas saw a sharp increase in new COVID-19 vaccinations last week, as new infections rise due to the more transmissible delta variant.The … END_OF_DOCUMENT_TOKEN_TO_BE_REPLACED

Clare Crawley had her breast implants removed and shared with her Instagram followers that she's doing great and on the mend.The 40-year-old season 16 … END_OF_DOCUMENT_TOKEN_TO_BE_REPLACED