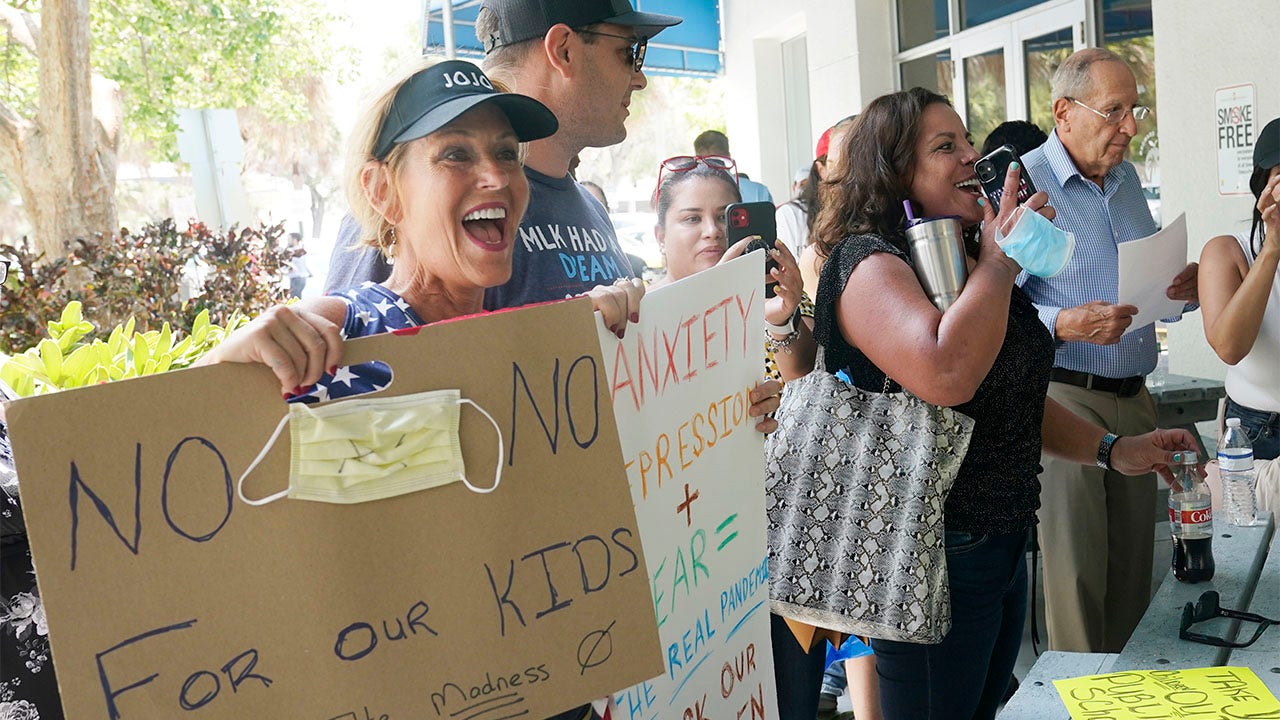 With U.S. health officials recommending that children mask up in school this fall, parents and policy makers across the nation have been plunged anew into a debate over whether face coverings should be optional or a mandate.

The delta variant of the coronavirus now threatens to upend normal instruction for a third consecutive school year. Some states have indicated they will probably heed the federal government’s guidance and require masks. Others will leave the decision up to parents.

The controversy is unfolding at a time when many Americans are at their wits’ end with pandemic restrictions and others fear their children will be put at risk by those who don’t take the virus seriously enough. In a handful of Republican-led states, lawmakers made it illegal for schools to require masks.

In Connecticut, anti-mask rallies have happened outside Gov. Ned Lamont’s official residence in Hartford, and lawn signs and bumper stickers call on him to “unmask our kids.” The Democrat has said that he’s likely to follow the latest advice from the Centers for Disease Control and Prevention.

TEACHER SLAMS ‘DEMORALIZING’ NEW CDC MASK GUIDANCE FOR SCHOOLS: ‘KIDS NEED TO GET BACK TO NORMAL’

The CDC on Tuesday recommended indoor masks for all teachers, staff, students and visitors at schools nationwide, regardless of vaccination status. The agency cited the risk of spread of the highly contagious delta variant, even among vaccinated people.

Alima Bryant, 33, a mother of four who organizes anti-mask parents in Branford, Connecticut, said she’s not a conspiracy theorist, but she believes scientists have overstated the dangers of COVID-19, especially for children. She said she will take her children out of school rather than subject them to wearing masks, which she believes are more likely to make them ill than the virus.

“Especially with little kids, I can imagine how often they’re touching dirty things, then touching the mask,” she said. “Also, in kindergarten, you have to learn social cues, and even with speech and everything, it’s so important to not be wearing a mask.”

But parents such as Ryan Zuimmerman, of Lenexa, Kansas, fear that approach will prolong the pandemic.

In Johnson County, Kansas, the state’s most populous county, five districts recommend but do not require masks. A sixth district has not yet decided.

Zimmerman, speaking at a recent meeting of country commissioners, said that if masks are only recommended and not required, “95% of kids won’t be wearing them.”

“This isn’t about comfort or control or obedience or your rights. It is not conspiracy or child abuse. It is about doing unto others as you want them to do unto you,” he said.

“I ask you this: If it was your kid who was high risk, what if you had to send that kid you had spent your whole life protecting to school in this environment?”

Another public meeting, this one in Broward County, Florida, had to be postponed for a day this week after roughly two dozen mask opponents waged screaming matches with school board members and burned masks outside the building.

When the discussion resumed Wednesday, it was limited to 10 public speakers, and all but one spoke vehemently against masks, saying their personal rights were being eroded.

Vivian Hug, a Navy veteran, brought her twins with her as she addressed board members, saying she was tired of the “fear mongering” and giving up “freedoms in the name of safety.”

“Please stop the insanity. You have already done damage to these kids having to wear masks,” she said before putting her daughter up to the microphone, where the little girl complained that masks make it hard for her to breathe and give her headaches.

But Dr. Karyl Rattay, director of the Delaware Division of Public Health, said there is no credible evidence masks are unsafe for children. She said the science is clear that face coverings have prevented the spread of COVID-19 in schools.

“If we want to have kids in school this fall, and as many kids as we possibly can get into school, masks are a key component,” she said.

Amid the debate, there is also a push to get more older kids vaccinated. President Joe Biden has asked schools to host vaccine clinics for those 12 and older, and states are also beginning to discuss whether to mandate that school employees either be vaccinated or undergo frequent testing for the coronavirus.

“To me that seems very reasonable,” said Dr. Joseph Kanter, the state health officer of the Louisiana Department of Health. “You achieve the goal of providing a safe environment. You maintain some choice in there. And clearly most people are going to look at that and say it make sense for them to get vaccinated, given that context.”

The push to vaccinate children varies by country. Half of 12- to 17-year-olds in Estonia’s second-largest city of Tartu have received their first vaccine shot, and local health officials are working to push the number to 70% before the school year begins. Countries such as Denmark and France also are actively encouraging vaccination of children, while others such Sweden and the United Kingdom have yet to begin mass vaccinations for those under 18.

The Pfizer shot is currently the only U.S. vaccine authorized for children 12 years and up. Moderna expects the Food and Drug Administration to rule soon on its application for children in the same age group.

Moderna said Monday that it expects to have enough data to apply for FDA authorization for younger children by late this year or early 2022. Pfizer has said it expects to apply in September for children ages 5 through 11.

But some parents, such as Bryant, say they will not get their children vaccinated, even after the kids are eligible, until they know more about potential side effects. Bryant said she knows people who have had severe reactions and others who believe it has affected their menstrual cycles.

Kanter urges families to vaccinate all eligible children. He said the argument that they rarely get severely ill from COVID-19 is becoming outdated.

“As an absolute number, we are seeing younger individuals and kids get sicker in higher numbers and get more severe numbers with delta than they have before,” he said.

Young people themselves have been wrestling with misinformation and vaccine hesitancy among parents and peers.

Angelica Granados, 16, of Albuquerque, New Mexico, finally got permission from her mother to take a COVID-19 vaccine last month. She worried about a potential allergic reaction.

“I’ve always wanted to take it,” Granados said, describing the shot as a choice between going “back to normal living” or risking infection.

Her mother, Erica Gonzales, stood by as she got the injection and waited with her during an extended 30-minute observation period.

“I didn’t want her to take it, but I mean, that’s her choice. It’s her body. She knows it best,” Gonzales said.

MARQUETTE — There’s never a bad time to think about your mental health: Where it stands, how you can improve it, and where to go for help if you need … END_OF_DOCUMENT_TOKEN_TO_BE_REPLACED