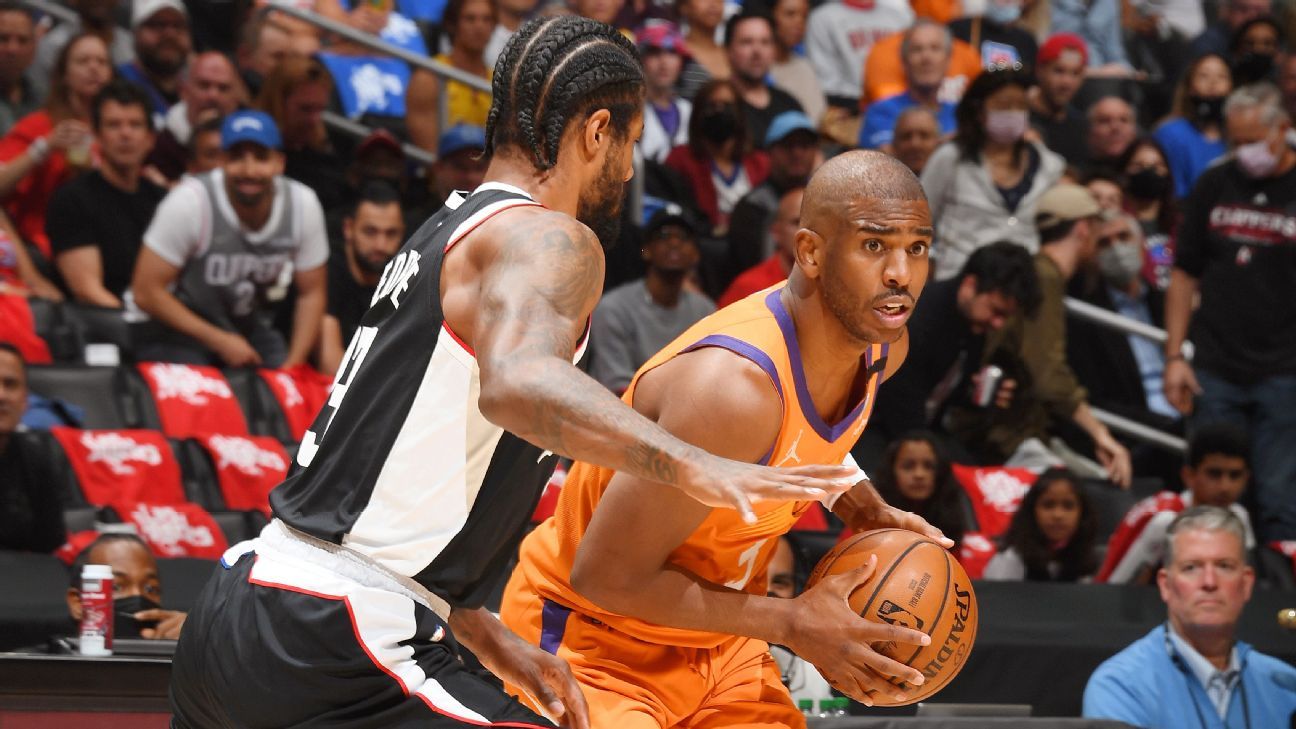 LOS ANGELES — Returning from a two-game absence because of the NBA’s health and safety protocols to a 106-92 loss in Game 3 of the Western Conference finals, Phoenix Suns point guard Chris Paul wasn’t in the mood to reflect on the latest setback he has had to navigate on the playoff stage.

“S— happens, and it did,” Paul said of his eight-day isolation period from the team because of testing positive for the coronavirus, even though he was already vaccinated. “I’m here now. So I’m cool.”

He was less content with his performance on Thursday, going 5-for-19 from the floor and finishing with 15 points, 12 assists and three steals as the LA Clippers drew within 2-1 in the series.

He was not ready to play at the start of the conference finals because of COVID-19, as he recalled the moment he received the bad news from Suns senior director of health and performance Brady Howe.

“I was laying in bed with my kids and got a text from Brady,” Paul said. “It is what it is. I dealt with it. Anybody with kids, anytime you’re going through something, the hardest part is being away from your kids and your family. Once you get over the shock of what’s happening, to hell with how and why. You just start figuring out how you can get better.”

While Paul stayed away from the team in L.A., the Suns jumped out to a 2-0 lead in Phoenix without him, as the 16-year veteran’s interactions with his team and friends in the NBA were limited to texts and phone calls.

“I talked to a few guys around the league who called, checked on me and whatnot,” he said. “I think the biggest thing, they called and said they just loved the way our team is. A few guys, like stars in our league, called and said, ‘Man, just to see the way that you guys really play together, play for each other, that’s real’ — our relationships and stuff.

“It’s genuine. It’s a fun group to be around, and when you’re around a group like that, you want to win. You don’t ever want the season to end because you actually like being around each other.”

Paul said he couldn’t do much physically besides shoot at the hoop at his house in the time he was out. But he didn’t want any insinuation of martyrdom just because he had another personal postseason disappointment to digest. After his hamstring gave out on him in the 2015 and 2018 playoffs, he suffered a fractured hand in the 2016 playoffs, and he already pushed through a shoulder injury against the Los Angeles Lakers in the first round this year.

“I’m just happy to be out here playing,” Paul said. “There’s a lot of people out here in the world who dealt with this [virus] and don’t get the opportunity that I have. So I’m just grateful to be back out here playing.”

Suns coach Monty Williams said he wished he could have played the 36-year-old Paul a little less than the 39 minutes he logged in Game 3, but Williams had little choice after backup point guard Cameron Payne suffered a sprained left ankle in the early going.

“I thought I played him too much. He probably got tired. But it hurt us when Cam Payne couldn’t come back, so I left Chris out for a longer stretch. That’s on me,” Williams said. “But I think if he practices more and plays more — he hasn’t done much in 10 days — I think he’ll be much better in the next game from a conditioning standpoint.”

Williams did not rule out Payne’s return on Saturday. “Not having Cam to spell Chris put us in a bit of a bind,” he said, “So hopefully [Payne] can come back and play in the next game.”

And Paul, just two wins from the first Finals appearance of his career, is ready for whatever the playoffs bring next.

“Things could be a lot worse,” he said. “I’m here now, got an unbelievable team in Phoenix and I’ve got the best support system you could absolutely have. So ain’t nobody over here feeling sorry. Whatever happened is in the past, and you move on.”

MARQUETTE — There’s never a bad time to think about your mental health: Where it stands, how you can improve it, and where to go for help if you need … END_OF_DOCUMENT_TOKEN_TO_BE_REPLACED