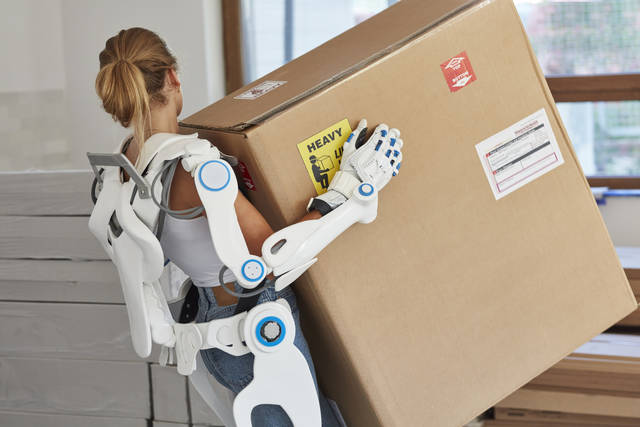 “You load 16 tons and what do you get? Disability payments and not a Corvette.” – with apologies to Tennessee Ernie Ford

I worked in an often-understaffed warehouse for 18 years — once becoming quite emotional when I heard Sam Cooke on the radio singing, “That’s the sound of the men working on the chain ga-a-ang … ” — so my interest was piqued by a new development in the lives of blue-collar workers.

At least one grocery chain is expanding its use of exosuits – wearable robotic technology that workers strap on to reduce the strain of lifting heavy boxes all day.

No one is claiming that exosuits can single-handedly resolve unergonomic situations; but they are an additional tool to complement regular chiropractic care, better workplace design, and platitudes such as “Work smarter, not harder,” “Lift with your legs,” “If you don’t stop slouching, I’m going to throw out all your baseball cards,” etc.

No, exosuits do not turn workers into superhumans (although unions are reportedly clamoring for them to include that funky “Six Million Dollar Man” jumping sound effect), but they are designed to reduce strain and soft-tissue damage by 30 to 40%.

I’ve heard rumors that companies are even thinking about tweaking exosuits to help with mental and emotional stress. Code-name: The Green Mile. (“I’m tired, Boss – but only 60% as tired as I used to be.”)

The exosuits utilize sensors and algorithms that nudge workers to develop the muscle memory to perform their tasks more efficiently. (New recruiting slogan: “Put in a mind-numbing, soul-stealing shift and still have the pep to give your rugrats a piggyback ride. Who could ask for anything more? No, seriously, who could ask for anything more? We’re keeping an eye on you malcontents.”)

OK, I know the words “sensors” and “algorithms” throw up red flags for many of you.

I‘ve had enough personal experience with defective sensors to know that fulfillment centers are asking for trouble. It’s hard to concentrate on your work when an oversensitive sensor nags you with “Why are you stacking those cases of salsa on a pallet when your car is out in the parking lot with a door slightly ajar, you moron?”

And I realize a large percentage of you who aren’t math nerds are sick of hearing about algorithms in every news story. It’s as if algorithms are slowly rewriting not only our history but the values we want to pass on to our children. (“The Louisiana Purchase was explored by the Algorithm and Clark Expedition.” “Fonzie jumped an algorithm.” “Babies are made when a momma algorithm and a daddy algorithm love each other very much.”)

Workers in exosuit experiments fall into three general categories: those who welcome the relief, those who are skeptical and those selfless individuals who think the suits should first be shared with our politicians, who face constant danger from repetitive motions such as finger-pointing, back-stabbing, manure-shoveling, etc.

I am cautiously optimistic that exosuits can keep more of the nation’s workers out of hospitals and nursing homes. But many experts are worried that we know next to nothing about the long-term effects on family life.

Prepare yourself for a world where we might well hear, “If your reaching to get olives off the top shelf of the pantry lasts for more than four hours, consult a physician” or “Ha! Got your nose! But … uh … I can’t give it back until I reboot.”

Danny Tyree can be reached at tyreetyrades@aol.com.

MARQUETTE — There’s never a bad time to think about your mental health: Where it stands, how you can improve it, and where to go for help if you need … END_OF_DOCUMENT_TOKEN_TO_BE_REPLACED