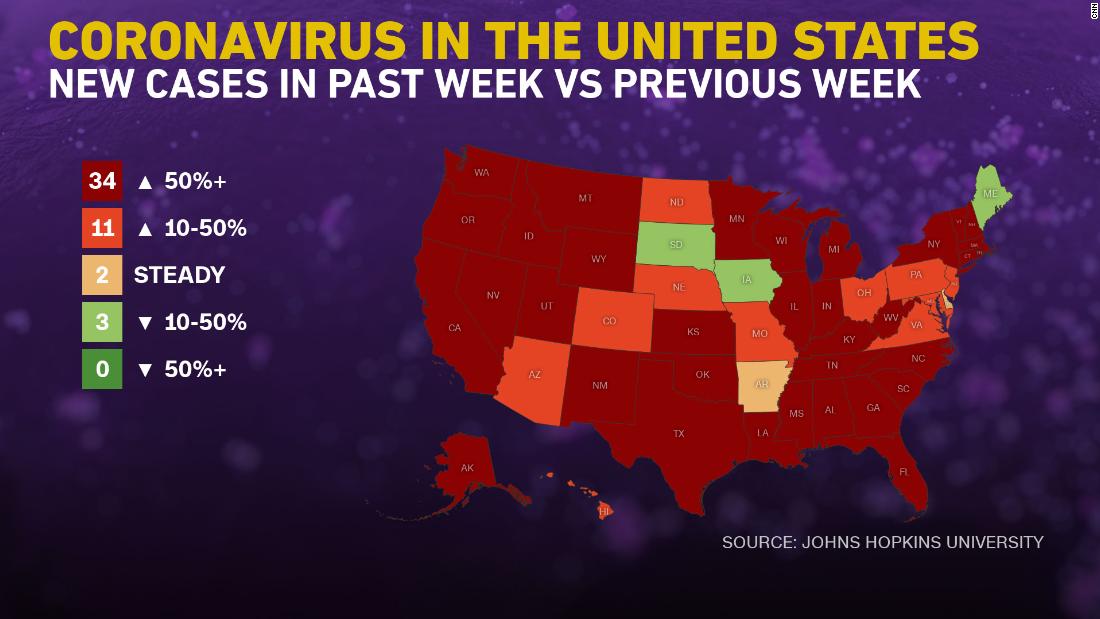 In 34 states, new cases this past week are at least 50% higher than new cases the previous week.

Only three states — Maine, South Dakota and Iowa — are seeing decreases between 10% and 50%. The rates of new cases in Delaware and Arkansas are roughly the same as the previous week.

The vast majority of new Covid-19 cases, hospitalizations and deaths have one thing in common: They’re among unvaccinated people, doctors say.

More than 99% of all Covid-19 deaths in June were among unvaccinated people, said Dr. Rochelle Walensky, director of the Centers for Disease Control and Prevention.

And younger people are getting hospitalized with Covid-19.

Missouri has one of the lowest vaccination rates in the country and one of the worst outbreaks of the Delta variant. The situation is so bad in Missouri that the United States deployed a surge team to help stop the spread — including members from the CDC and the Federal Emergency Management Agency.

“If they’re sick enough to be admitted to the hospital, they are unvaccinated. That is the absolute common denominator amongst those patients,” he said.

“Earlier in the pandemic, and certainly before we had vaccinations, we were seeing a much older patient population in the emergency department and getting admitted to the hospital,” Jarvis said.

“In recent weeks, we’ve been seeing a much younger population,” he said. “We’re seeing a lot of people in their 30s, 40s, early 50s. We’re seeing some teenagers and some pediatric patients as well.”

In St. Louis County, officials said the rate of new cases jumped by 63% over the past two weeks.

“This variant is spreading quickly, and this variant has the ability to devastate those in its wake. And that is why it is so critical to get vaccinated now.”

If unvaccinated Americans want to stave off the Delta variant but don’t want to wear masks, the choice is simple: Get vaccinated, said Dr. Jonathan Reiner, a professor of medicine and surgery at George Washington University.

“We can’t have it both ways. We can’t be both unmasked and non-socially distant and unvaccinated. That won’t work,” he said.

“We have the tools to put this down — we can put it down this summer — but the way to do that is vaccination.”

Some don’t want to be vaccinated because of popular myths and concerns about the Covid-19 vaccines. And recent news about Guillain-Barré syndrome has led to some concern on social media. The neurological condition has been reported in about 0.0008% of the people who have received the Johnson & Johnson vaccine.

It’s not clear whether those cases of Guillain-Barré syndrome resulted from the vaccine.

Of the 12.8 million Americans who have received the Johnson & Johnson vaccine, about 100 cases of GBS have been reported, the US Food and Drug Administration said.

“Each year in the United States, an estimated 3,000 to 6,000 people develop GBS,” the FDA said. “Most people fully recover from the disorder.”In Arkansas, which has been hit hard by the Delta variant, Little Rock Mayor Frank Scott Jr. said he was very reluctant to get vaccinated. He’s never even gotten a flu shot before, the mayor told CNN on Monday.

But after researching the facts about Covid-19 and the vaccines, he said, he changed his mind.

“Being a Black man and understanding the Tuskegee experiment and the amount of distrust that comes from the Black community as well as the Latino community, it felt like I definitely had to lead the way to ensure that all residents went out and took the shot,” Scott said.

“I did the research and understood the facts,” said the mayor, who is now vaccinated. “It’s serious, and we should not have to allow someone to die for us to really believe the research and science.”

In Mississippi, the state health officer, Dr. Thomas Dobbs, said seven children are in intensive care — and two of them are on ventilators — due to the surge.

is not immediately clear how these hospitalizations compare with previous surges in Mississippi.

On Monday, Dobbs tweeted: “Pretty much ALL cases in MS are Delta variant right now,” adding that the vast majority of cases, hospitalizations, and deaths in the last month were among those who are unvaccinated.

Only a quarter of kids 12 to 15 are vaccinated

Dr. William Schaffner, an infectious diseases professor at Vanderbilt University Medical Center, told CNN’s Jake Tapper that the nation’s focus should be making sure children get all the vaccines they need to.

“That’s very, very important,” he said. “You know, for many vaccines during the Covid enterprise, routine vaccinations dipped because children didn’t go to their family doctors and their pediatricians. Now that they’re all going back to school again this fall, we really need to keep vaccinating them to get them caught up.

“And that’s with routine vaccines. And now we have Covid vaccine on top of that.”

Schaffner said he hopes the FDA “fully licenses” the Covid vaccines soon so the concern from some officials and parents about their authorization status can be alleviated.

It takes five weeks to be fully vaccinated with Pfizer’s vaccine, the only one authorized for adolescents ages 12 to 17, so people will need to make a decision soon.

MARQUETTE — There’s never a bad time to think about your mental health: Where it stands, how you can improve it, and where to go for help if you need … END_OF_DOCUMENT_TOKEN_TO_BE_REPLACED