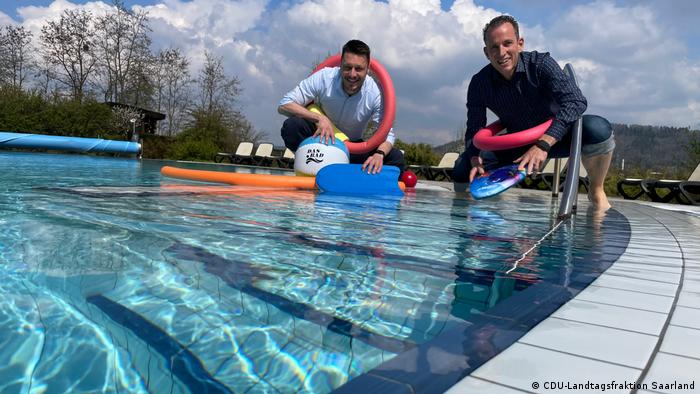 Germany has begun partially lifting various lockdown restrictions in place since November. The relief is palpable, and in many areas of the country children and adults have started getting out again. But for children in particular, the lack of physical activity over a longer term is a major problem. Many schools and sports clubs had long since canceled sports lessons and physical activities.

Parents and professionals alike are concerned. “This extended period of restricted movement is a bigger problem for young children and teenagers than learning deficiencies in the cognitive field,” Alexander Woll tells DW. Woll is a sports scientist at the Karlsruhe Institute of Technology in southwest Germany. For almost a decade, he’s been analyzing patterns of movement among children.

Shortly before the pandemic took hold, the Karlsruhe institute had carried out a study into fitness and health among a representative group of volunteers between the ages of 4 and 17. That, in turn, meant that Woll could use the data gathered to carry out comparative studies during the first lockdown in the spring of 2020, and subsequently during the current second lockdown.

It turns out that movement levels were in fact higher during the first lockdown — going from 107 minutes up to 143 minutes per day. “That increase actually made up for the reduction in sports activities in clubs and schools,” says Woll. “It can probably be attributed to the outstanding spring weather — and the fact that a lot of parents had to stay at home, and suddenly found themselves with much more time on their hands than they would have expected.”

However, in the second lockdown, that mobility figure slipped back to just 61 minutes, with half of young children and teenagers experiencing a dip in their fitness. And that is the problem: “Of course, children need movement for healthy development. Not just physical development, but also mentally and spiritually.”

Authorities have only slowly begun to recognize the negative impact of the pandemic on young people. Now, they are making up for lost time. The German government has earmarked an additional €2 billion ($2.43 billion) in the federal budget for a package of “catch-up measures” that focus is on learning deficiencies in schools, extracurricular activities in clubs, and more general leisure pursuits. Encouraging sports is part of the planned package: it is not, however, the major concern.

Woll points to a more general challenge: “For a long time, sports were seen as a source of infection.” But new studies have shown that “movement and sport play a protective role.” One recent study out of the United States, for instance, demonstrates “that physical inactivity is a key determinator for particularly serious cases of COVID-19.”

In other words, physical activity is part of the solution, not part of the problem. Which is why Woll welcomes the fact that unlike some of its European neighbors, Germany didn’t impose specific limits on people’s radius of movement — that is, the distances that they could actually go. And he believes that it was one reason why, in comparative terms at least, Germany was hit less hard than other countries by the first lockdown. Now, he concludes, it is high time for sports to be energetically promoted.

Learning to swim on holiday

Among those already leading the way are Frank Wagner and Raphael Schäfer, who serve as conservative deputies in the regional parliament in the small western state of Saarland. “We’ve come up with a special program to use the summer holidays, beginning at the end of July, to encourage swimming schools to offer catch-up courses and classes,” Wagner told DW.

But is it really possible to make up for all the lost time? Researcher Alexander Woll says that the next studies undertaken will need to focus on the longer-term perspective: “Is there going to be a ‘corona generation’? Or will deficiencies be evened out in the course of time? So far, we simply do not know.”

In Saarland, Wagner is happy to report, there has been overwhelming demand for the catch-up classes. Numerous clubs, groups and individual parents have been getting involved and making sure that as many children as possible learn to swim.

Wagner, a qualified sports teacher, will also be teaching a course. He says the generously subsidized two-week courses will effectively be free of charge, and more funding will be provided, if necessary, to meet demand. Wagner says this is a small but important step in helping get back to normalcy. “What we’re giving back to the parents is a sense of security: The feeling that despite the pandemic, their kids will learn to swim.”

This article has been translated from German.

While you’re here: Every Tuesday, DW editors round up what is happening in German politics and society, with an eye toward understanding this year’s elections and beyond. You can sign up here for the weekly email newsletter Berlin Briefing, to stay on top of developments as Germany enters the post-Merkel era.

MARQUETTE — There’s never a bad time to think about your mental health: Where it stands, how you can improve it, and where to go for help if you need … END_OF_DOCUMENT_TOKEN_TO_BE_REPLACED