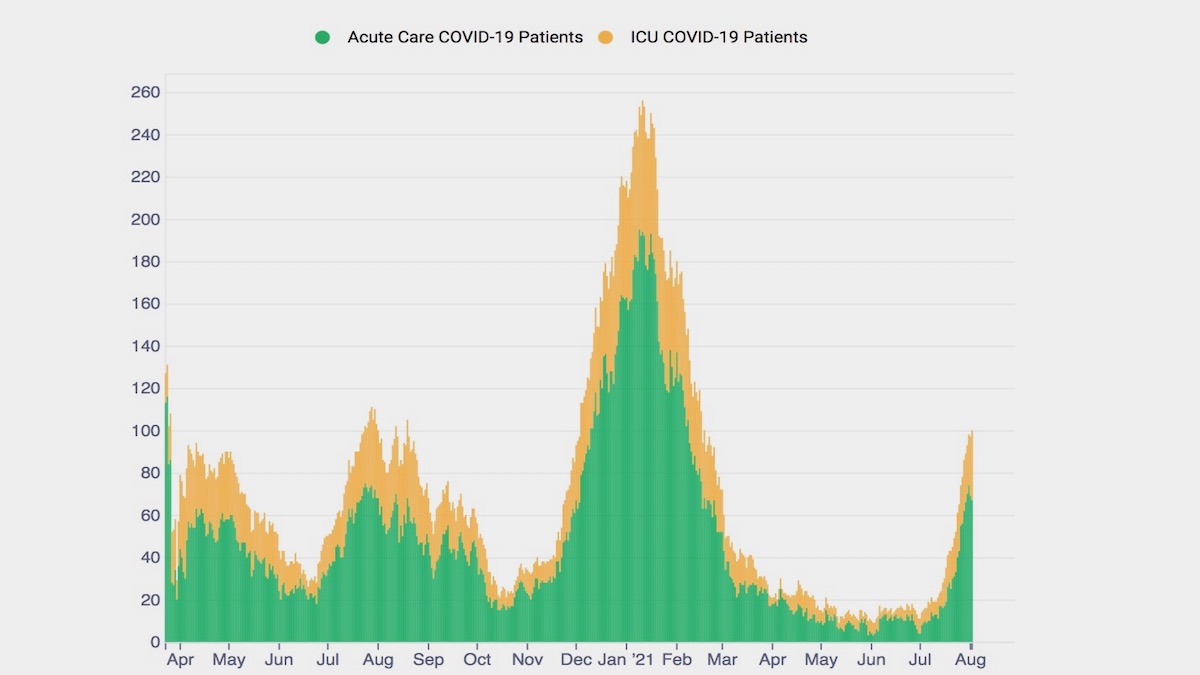 We were expecting a carefree summer of travel and partying. So far we’ve gotten fog, fires and plenty of frustration. New York Times columnist, and SF resident, Ezra Klein, expresses what many of us must be feeling.

Any good news? Yes there is.

It appears the Delta has finally pried cumulative hospitalization numbers (or a number) from the icy iron fingers of DPH. According to the Department, as of August 4 there have been 3041 hospitalizations since the pandemic began (you have to scroll down to the bottom of the link to get it). If my math is correct (and I wouldn’t trust it), that comes out to an infection-hospitlization rate of about 7.25 percent. Of the 3041, only 16 had been fully vaccinated.

More good news on the hospitalization front. Of the 164 million vaccinated Americans, the CDC says only 7,101 have been hospitalized. Great. But what’s even better is in a footnote stating “1,816 (26%) of 7,101 hospitalizations reported as asymptomatic or not related to COVID-19.” Wow. Does that hold true for non-vaccinated Covid patients as well?

Finally a reader submitted this piece which suggests the official response to Covid would have been better if it had been treated it as a national security issue. “Imagine if 600,000 Americans and 4 million worldwide had been killed in a terrorist attack, and 50,000 were still being killed every week.” Yeah, they would have bombed Iraq.

Scroll down for today’s Covid numbers.

The CDC data used for the chart lags behind the data supplied from SFDPH. As of August 5, the vaccination report from DPH remains somewhat static with over 76 percent of all San Francisco residents having received one dose, and over 70 percent  now completely vaccinated (it is unclear what number DPH uses for total SF residents, but it appears to be the 881,000 figure cited by the US Census in 2019). On August 5, the seven-day rolling average of shots per day to new recipients was 552. For information on where to get vaccinated in and around the Mission, visit our Vaccination Page.

According to the CDC, for the 7 days ending August 4, there have been 72 new admissions to SF hospitals, a 14.29 percent increase over the prior seven days. Covid patients account for 4.83 percent of hospital beds (up 1.87 percent) and 9.36 percent of ICU beds (up 2.34 percent).

Hospitalizations may be tapering off, but cases continue a steep vertical rise. For the week ending July 29, the seven-day rolling average of daily new cases in the City rose to 265 new cases, or approximately 30.7 new cases per day per 100,000 residents (based on 881,000).

The Citywide average positivity rate has risen to a level not seen since last April. Dr. Grant Colfax said yesterday that the City is responding with “robust” testing particularly in the southeast sector. On the ground it doesn’t look so robust, as Jon Jacobo of the Latino Task Force tweets “The fact we limited and reduced testing capacity in the city is a bit beyond me. We at LTF never did. Small locations are now slammed with folks who would not usually need to come see us, because there is no locations for them to test.”

DPH has reported another 2 new Covid-related deaths in July bringing July’s total to 9 and the cumulative total to 567.

Covid R Estimation puts the current R Number for San Francisco at 1.44, still among the highest in California, which it places at 1.35. The ensemble estimates the San Francisco R Number at 1.13 (the lowest its been for six weeks) and the California R Number at 1.28. For a good explanation of the R Number, see the this thread.

MARQUETTE — There’s never a bad time to think about your mental health: Where it stands, how you can improve it, and where to go for help if you need … END_OF_DOCUMENT_TOKEN_TO_BE_REPLACED