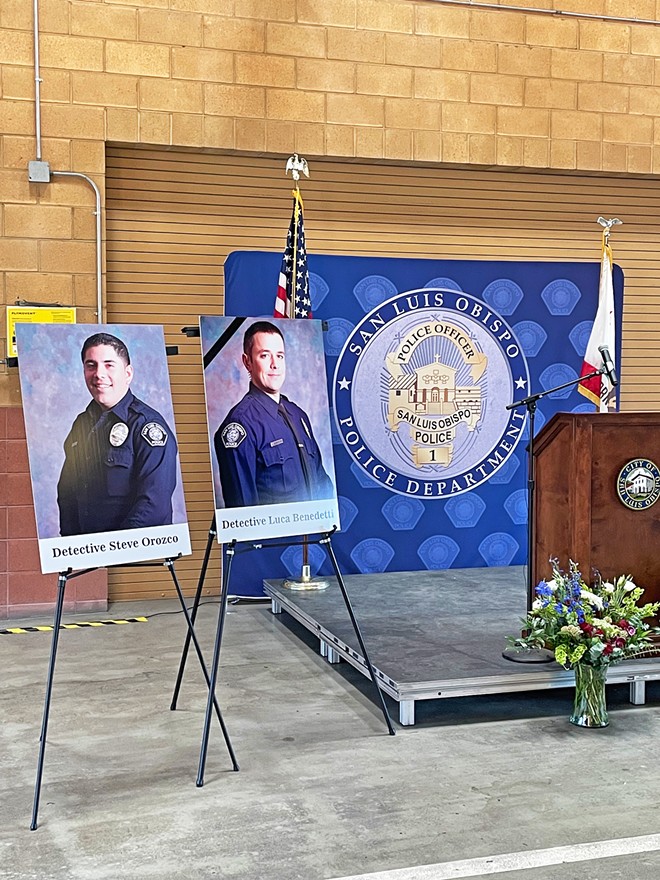 After losing two jobs during the COVID-19 pandemic, Giron fell isolated and began to show signs of worsening signs of serious mental illness, he said. In late 2020, Giron “disappeared” in Mexico for three weeks, which deeply worried the family.

However, it was their erratic behavior when they returned to SLO that worried them even more.

“He started talking to himself. And he kept thinking people were looking at him, out of paranoia,” Wichman told the New Times on May 11th. “We couldn’t get him any mental help. We tried again and again.”

On May 10, six SLO police officers complied with a search warrant at Giron’s apartment in Camellia Court, SLO, as part of an investigation into a number of recent commercial thefts, including one at The Pad Climbing gym, Giron’s former workplace.

When officers forced Giron’s door around five in the afternoon, officials said he was “waiting” inside with a gun and opened fire. During the exchange, Giron shot and killed SLO police detective Luca Benedetti, 37, and wounded Detective Steve Orozco before handing him the gun.

At an emotional press conference the next day, SLO County Sheriff Ian Parkinson said he believed Benedetti was the first peace officer to be shot dead in SLO County service in at least 36 years.

SLO City Manager Derek Johnson called the incident “an incomparable tragedy,” and acting SLO police chief Brian Amaroso described Benedetti, a 12-year veteran of the local law enforcement, such as “a dedicated officer, a talented detective, a proud member of the SLO Regional Swat Team, and most importantly, a loving husband and father.” Orozco is expected to fully recover.

Officials provided few additional details about the officers involved, Giron, or the ongoing investigation into the shooting, which will be conducted by the SLO County Sheriff’s Office and the SLO County District Attorney’s Office.

Parkinson said Giron had a history of nonviolent criminal offenses related to alcohol, drugs and property. He said nothing in Giron’s file suggested a history of mental illness.

But Wichman, Giron’s mother, said otherwise. He said he made multiple attempts over the past six months to contact SLO authorities about his son’s deteriorating mental state. He said he requested attendance checks and even asked to be placed in a psychiatric ward under Welfare Code 5150.

“We tried to get SLO to make him a 5150,” Wichman said. “They said we couldn’t make a 5150, even after it was gone for three weeks. When it reappeared, they didn’t do anything. They didn’t even go to his house to check it out.”

Sheriff’s Office spokesman Tony Cipolla said the department could not comment on the ongoing investigation. The OSL police department also declined to comment.

“All we can say right now is that we will study all aspects of this case, including mental health factors,” Cipolla said.

Wichman said he worries that police officers were searching without understanding his son’s mood.

“They didn’t get any story about what was going on,” he said.

After the advent of COVID-19, Wichman said Giron lost his two jobs at The Pad Climbing and Costco. The breakup with The Pad was particularly painful for Giron, who has been an avid climber since his youth, he said.

“He just threw it,” he said. “It was the climbing gym that didn’t leave his mind … He had an unhappy resentment and it made him sick.”

On May 10, The Pad reported an overnight theft of between $ 15,000 and $ 20,000 of equipment. After the shooting, police said he recovered stolen property from Giron’s apartment, but did not confirm it belonged to The Pad. The Pad declined to comment, but issued a statement on social media.

“We would like to express our deepest gratitude to PD SLO and express our heart to the officers who were shot, their families and colleagues,” the message read. “As we learn more about what happened to Eddie, we hope there’s something to learn.”

Wichman expressed shock and sadness over his son’s actions and cried as he spoke of the police officers who shot his son and the loss Benedetti’s family must have felt and the loss he felt for his son. He added that the series of events underscores the need for better mental health services and support systems.

“Before this year, I tell you, he was an angel. You wouldn’t even expect him to spit on the sidewalk,” Wichman said. “That’s my message at SLO: you know what, people are not invisible. There are a lot of people who are fighting and you can’t take your face off these people.” Δ

MARQUETTE — There’s never a bad time to think about your mental health: Where it stands, how you can improve it, and where to go for help if you need … END_OF_DOCUMENT_TOKEN_TO_BE_REPLACED