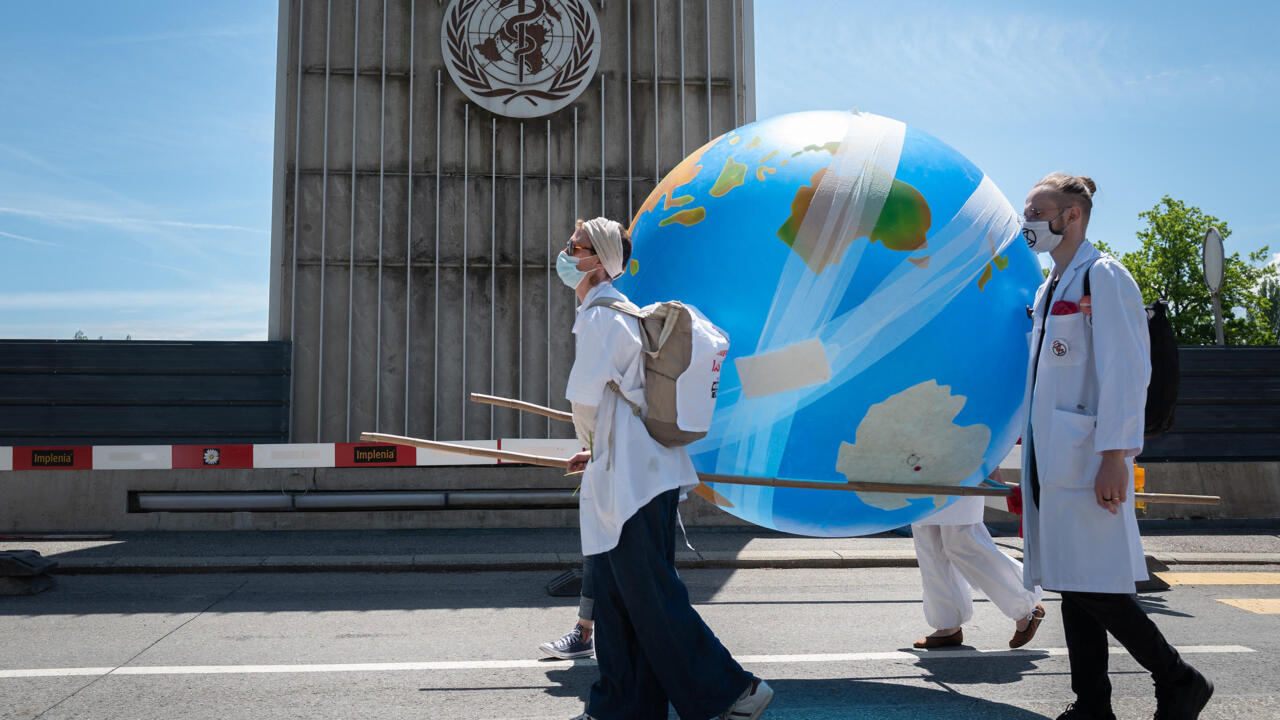 A growing number of doctors and front-line healthcare workers are turning to climate activism to urge global leaders to declare climate change a public health emergency.

Doctors and health workers, some clad in white coats and brandishing placards, marched to the headquarters of the World Health Organisation (WHO) in Geneva on Saturday to demand that health authorities and governments prioritise climate change to avert a global health crisis.

Their demands for immediate action included a focus on preventative healthcare with education programmes in schools and the wider community, more equitable distribution and access to medical care, reducing the carbon impact of health care, and stricter control of industries to ensure clean water and air.

Underscoring the progressive nature of their platform, the protesters also called for the creation of citizen assemblies to steer strategic health decisions. Their demands were listed in a petition, signed by more than 1,200 prominent doctors and healthcare workers from around the world.

WHO chief Dr. Tedros Adhanom Ghebreyesus, who welcomed the protesters, said that while “the pandemic will end, there is no vaccine for climate change”. He later tweeted that health and climate change were “inextricably intertwined” and that the WHO would be “standing in solidarity and urging global action” with the demonstrators.

Indeed, the WHO and the prestigious Lancet medical journal have declared climate change the biggest threat to global health in the 21st century – a declaration made even before the Covid-19 crisis.

Front-line health workers and researchers may have been sounding the alarm on climate change for years, but it is only recently that more voices have stepped up to lead rallies, sign petitions and publish studies with the same fierce urgency as grassroots activists.

Professor Valerie D’Acremont, an infectious diseases physician and global health specialist at Lausanne University Hospital, is among those speaking out.

D’Acremont, who mainly divides her work between Africa and Europe, said that frustration has driven her towards more health advocacy work because “governments and the public have failed to understand the strong links between climate change and biodiversity loss and health”.

“We want governments to take action,” she said. “Many of us feel it makes no more sense to do our job because we are fed up with being always behind, preparing for the next health catastrophe instead of acting on the root causes of the problems. Covid-19 is one illustration of this problem.”

A rise in cases of dehydration and heat stroke, and floods that spread cholera, are real consequences if countries continue on their current trajectories. Then there are the diseases not seen before in Europe, such as Dengue fever, that have reached France, Spain and Croatia. Cases of Zika have also been found in southern Europe.

Others – such as tick-borne encephalitis and the West Nile virus, which are already present in the United States – are also cause for concern.

“Some diseases like cardiovascular and respiratory illnesses will increase more strongly, but it’s harder for people to make the link to climate change because they already exist,” D’Acremont said.

‘We can’t continue in this direction’

D’Acremont is also a member of Doctors for Extinction Rebellion (Swiss chapter), the group behind Saturday’s rally. It emerged as an offshoot of Extinction Rebellion, an environmental activism group that gained notoriety in the UK in April 2019 for hugely disruptive demonstrations that brought downtown London to a standstill and drew the ire of thousands of commuters caught up in the chaos. British Prime Minister Boris Johnson was prompted to weigh in, dismissing the climate change protesters “crusties” who live in “hemp-smelling bivouacs”.

But the British prime minister’s caricature of climate activists missed the mark: a core group of front-line health workers and doctors branched off to create Doctors for Extinction Rebellion, keeping the name and merging climate activism with public health.

The group has now distanced itself from its more radical origins and is among several groups attracting activists from the medical field. While some might consider the practice of medicine and social activism to be incompatible, D’Acremont said there was already a movement among health professions to speak out over cracks in the health system, though she agrees climate activism among doctors is a relatively new phenomenon.

“Some public health experts were already saying we can’t continue in this direction. The human side of medicine is getting lost because the health system is not allowing us to do preventative medicine. The system has to adapt and climate change is making this point.”

Dr. Rita Issa, a London-based general practitioner, academic and co-founder of Doctors for Extinction Rebellion in the UK, says that she felt a “moral duty” as a doctor to speak up about climate change. She said she is already seeing an alarming number of patients, including children, in her clinic who suffer from a variety of health problems linked to climate change.

“Patients come with a host of factors that impact their health, like the food they eat, the houses they live in and the air they breathe,” Dr. Issa said. “I’m seeing children with 10 percent reduced lung capacity. If we’re truly to address their health we also have to tackle the air they breathe. If we don’t want to have to treat kids with worsening lung capacity and heatstroke, then we need to take action now.”

Dr. Issa’s findings in her clinical practice are backed up by scientific data.

Results from a study published Monday in the journal Nature Climate Change showed that more than a third of heat-related deaths around the world from 1991 to 2018 were the result of human-induced global warming. More than 43 countries in the study recorded heat levels higher than the optimal temperature for human health.

Researchers also found that the health impacts of climate change were already being felt. Despite Covid-19 lockdowns, which saw a global fall in pollution levels last year, global temperatures still rose to 1.2° Celsius above pre-industrial levels, edging close to the 1.5°C maximum benchmark set by the world’s nations.

The shock of the Covid-19 pandemic illustrated that there is a public health issue that “doesn’t respect national boundaries, or care if you’re rich or poor”, said Dr. Issa, adding that she believed the crisis helped the health aspect of climate change break into the mainstream.

While she understands that activism is not for all doctors, Dr. Issa believes that “medicine is inherently political”.

“We have a responsibility to pick up signs of things early, as part of our work as doctors, and it extends beyond individual patients. Part of the reason we founded Doctors for Extinction Rebellion was to direct insight on how issues impact our patients and community, and to communicate scientific information into something digestible.”

Although active in signing petitions urging climate change action, Professor Antoine Flahault dismisses any suggestion that he is an activist.

Speaking from the Institute of Global Health at the University of Geneva, where he is the director, Flahault said he has been warning about the health impacts of climate change as part of his everyday clinical observations as a doctor and researcher.

During the pandemic, data substantiated direct links between global air pollution levels and outbreaks of Covid-19, with spikes observed where outbreaks were active, especially in cities in India as well as Paris and London. And though the link between reducing air pollution and improving the climate situation is an obvious one, he sees changes to how healthcare is delivered as a less-talked-about but crucial aspect of managing climate change.

Like D’Acremont, he wants to see reforms to help meet the challenges by rethinking the traditionally top-down approach of the health system.

“We need to include the citizen and patients in their own care,” he said. “We also have to try to educate the public that more is less and of the benefits of parsimony by abstaining from too many exploratory tests and treatments. It’s not just the cost to the social security system and to patients, it’s also the carbon footprint of all these procedures and how we administer health care.”

If he can convey just one message to global leaders ahead of the COP26 climate change summit in Glasgow in November, Flahault hopes to make clear that “there can be no healthy lives without a healthy planet”.

It’s a warning likely to resonate more acutely this week, at least in France – where the mercury is expected to rise as a heatwave sweeps across the country, a trend seen in recent years that has often been marked by heat-related illnesses and fatalities.

All of Texas saw a sharp increase in new COVID-19 vaccinations last week, as new infections rise due to the more transmissible delta variant.The … END_OF_DOCUMENT_TOKEN_TO_BE_REPLACED

Clare Crawley had her breast implants removed and shared with her Instagram followers that she's doing great and on the mend.The 40-year-old season 16 … END_OF_DOCUMENT_TOKEN_TO_BE_REPLACED