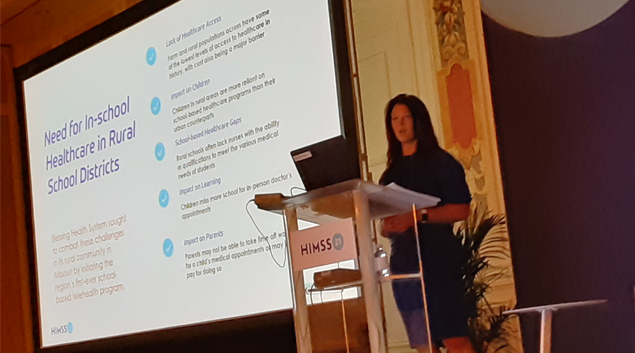 LAS VEGAS – Rural communities across the country have struggled to maintain access to quality healthcare during the COVID-19 pandemic. One overlooked demographic is children, with those living in remote areas more likely to rely on CHIP and Medicaid programs. Treating children in those areas has been a challenge, but one district in Missouri has found a winning strategy: Establishing a school telehealth program.

Rose Ghattas, RN, virtual health coordinator for Blessing Health System, spoke about her efforts to do that during the 2021 HIMSS Global Health Conference & Exhibition session “Piloting a School Telehealth Program in a Rural Community.” The session was co-presented by Joseph DeVivo, president, hospital and health systems at Teladoc Health, which partnered with Blessing on the initiative.

When Blessing first implemented the telehealth program, the school district it served had about 11,000 students. The telehealth program was attractive because local healthcare providers were just a few miles away from the district’s schools. So, if it was determined that a student’s virtual visit alone couldn’t address their issue, they could get higher-acuity visits by going to the hospital in person.

This made the telehealth program a hybrid model, in which school nurses connected students with health complaints to local providers via telehealth, where a determination could be made as to the best treatment path.

“The school nurses were very embedded in this process,” Ghattas said. “We didn’t skimp on training them. And we wanted to make them feel important in this, and we knew that would make this program successful.”

Early in the implementation process, Ghattas and the Blessing and Teladoc teams needed to ensure that the technology was both reliable and flexible. Good customer support needed to be in place, and the school’s WiFi had to be upgraded to ensure there were no connectivity issues at critical times.

“If your child is sick, you don’t want an IT issue to be your failure,” Ghattas said. “We also wanted connection rates that did not impact care.”

To make the program work, everyone involved needed to ensure patient loyalty. To that end, they offered registration packets available online, through the mail or in school offices as well as the ability to opt in or out of the program. Parents are contacted at each encounter, and a robust marketing campaign was launched to educate people about telehealth and the conveniences and benefits it offers.

Few know of the benefits of telehealth better than DeVivo.

“The essence of virtual care is to expand a specialist’s expertise beyond their borders,” he said. “You need the technology, the security, and the ability to amass all that data. And these are challenges that exist in alternate sites, like school systems.

According to Ghattas, Blessing and Teladoc also involved school counselors in order to add a layer of behavioral healthcare to the mix.

The initial deployment, in 2019, was rapid. The initiative began in June, and was up and running by the start of the school year in September.

There were obstacles, of course. Connectivity was an issue initially, as well as telehealth simply being a new concept to many people in the community. There was also a learning curve in terms of understanding how to use the equipment.

But with those challenges there were also lessons learned. The privacy expectations of the school counselors were different than those of Blessing, and public awareness was initially low, necessitating the marketing campaign that included an article in the local newspaper on which the community still largely relies.

The successes of the program, however, speak for themselves.

“Eighty percent of students opted in in the first year,” Ghattas said. “We thought that was pretty good, for a community that didn’t really know what telehealth is. We prevented one to two absences per week. And the time they went to a school nurse to the time they saw a provider was less than 30 minutes, often around 15 minutes.”

The next steps for the program are to expand more into behavioral health, expand to more schools and establish a more comprehensive budgeting framework.

“Health systems are going to be delivering care more and more outside of the health system,” said DeVivo. It’s about having a methodology of how you interact with your patients, and then extend that methodology to all kinds of different locations.”

MARQUETTE — There’s never a bad time to think about your mental health: Where it stands, how you can improve it, and where to go for help if you need … END_OF_DOCUMENT_TOKEN_TO_BE_REPLACED