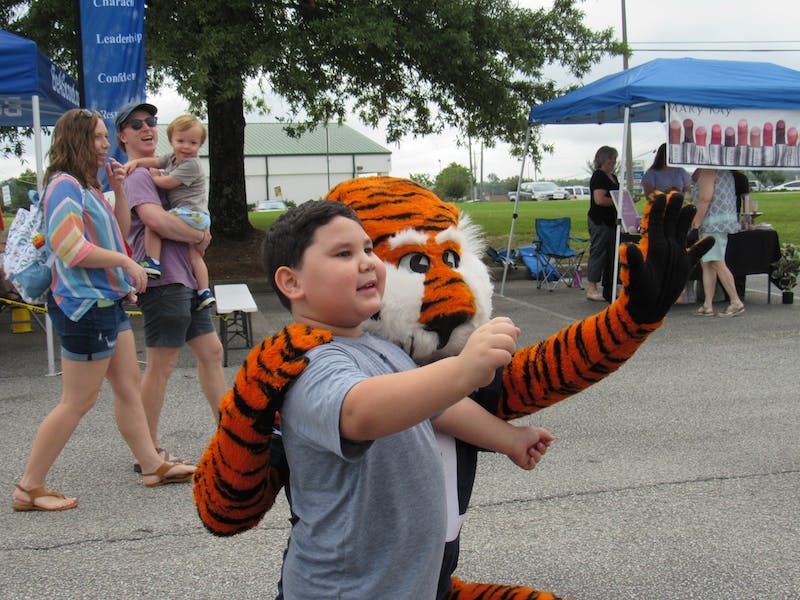 Lee County families visited East Auburn’s Airport Plaza on Saturday morning to ride a train, throw inflatable axes, have their faces painted and enjoy food truck offerings all while money was raised for a fundraiser to donate shoes to local and international children.

The 11th annual Back 2 School Bash hosted by Cornerstone Family Chiropractic welcomed parents and children to participate in free activities and purchase food and other items in support of a donation drive with Samaritans Feet, a North Carolina-based nonprofit that will donate shoes to families in Lee County and Honduras.

“There’s people who came from all over Lee County and 60 businesses participating in one way or another [and] the weather [was] great,” said Rachel Wicks, community relations director for Cornerstone Family Chiropractic. “Lots of organizations locally have been reaching out to the people they know are in need, so those children have been receiving their invitations and they’ll be getting their shoes next weekend.”

Wicks said shoes going to children in Honduras should be packed up and shipped in about a week and a half, with over 500 pairs being sent to the San Pedro Sula Dream Center in San Pedro Sula, Honduras.

“[Honduras] was hit by two hurricanes and COVID, so we’re talking about people who lost everything and are starting over from scratch,” she said. “The great thing about the charity is I could call them today and say ‘We have enough for another thousand pairs,’ and they’d send them here.”

Over $26,000 has been raised in this year’s donation drive from businesses in the bash, patients at CFC over the last few weeks and online donations, according to Wicks. As of Saturday afternoon the fundraising campaign had received $9,165 online alone. A raffle at the bash of varying prizes at different ticket levels also contributed to the fundraising campaign, with each ticket priced at $1.

Chrissie Bailey, 40, of Opelika, has been a long-time patient at CFC and visited the bash with her two daughters and purchased 20 raffle tickets. She said her children enjoyed the train rides around the plaza among other activities.

“It’s always just a fun, family-friendly event that we can come to, and everyone’s super nice,” Bailey said. “We’ve gone to pretty much all of [the bashes] in the past few years, [but] this seems to be one of the bigger ones with more food options and children’s events.”

Bailey said she was impressed by the number of shoes being donated this year and was happy to help be a part of the fundraising effort.

“I think it’s an awesome thing to contribute to,” she said.

Jasmine Williams, 31, of Auburn, visited the bash with her niece and her sister after seeing promotions for the event and said she was just pleased to be able to bring her niece to an outdoor fair for the first time in a while because of the pandemic.

“This was nice,” Williams said. “It’s a nice event where people can still have fun but be outside and try to stay safe as well.”

CFC was not sure how many people attended during the event while it was ongoing as there was no admission fee, but Wicks said the office expected “a couple thousand” visitors throughout the morning.

Aubie puts his math skills to the test at the Mathnasium booth at the 11th Back 2 School Bash at Airport Plaza on Saturday, Aug. 31, 2021, in Auburn, Ala. Mathnasium supplied free lessons as one of the event’s raffle prizes.

For businesses, the event was an opportunity to see new customers and be charitable as proceeds from registration fees went to CFC’s shoe campaign.

“Businesses made donations to be here,” Wicks said. “[The bash is] a great avenue for new businesses to start meeting families in the community, so that’s another reason we love doing this.”

Rick Lanier, co-owner of Franky June’s Weeny Wagon, started his food truck in February of this year, and while the Back 2 School Bash didn’t see the truck’s largest showing of customers, he said he enjoyed cooking up hot dogs for visiting families.

“We’re more than happy to be out here,” Lanier said. “We had just a limited menu we put out for the day — if we put our normal menu out there, the line would be so long because they’re big [hot] dogs.”

Wicks said Lee County families in need of shoes for their children may contact the Auburn Dream Center at auburndreamcenter@churchofthehighlands.com or by calling the main Dream Center number at 205-591-1700 for information on how to receive shoes.

“We definitely want to make sure we have enough to meet the need locally and then send the rest to Honduras,” Wicks said.

Those interested in donating to CFC’s fundraising before shoe distribution next weekend may visit the office’s campaign page online here.

MARQUETTE — There’s never a bad time to think about your mental health: Where it stands, how you can improve it, and where to go for help if you need … END_OF_DOCUMENT_TOKEN_TO_BE_REPLACED