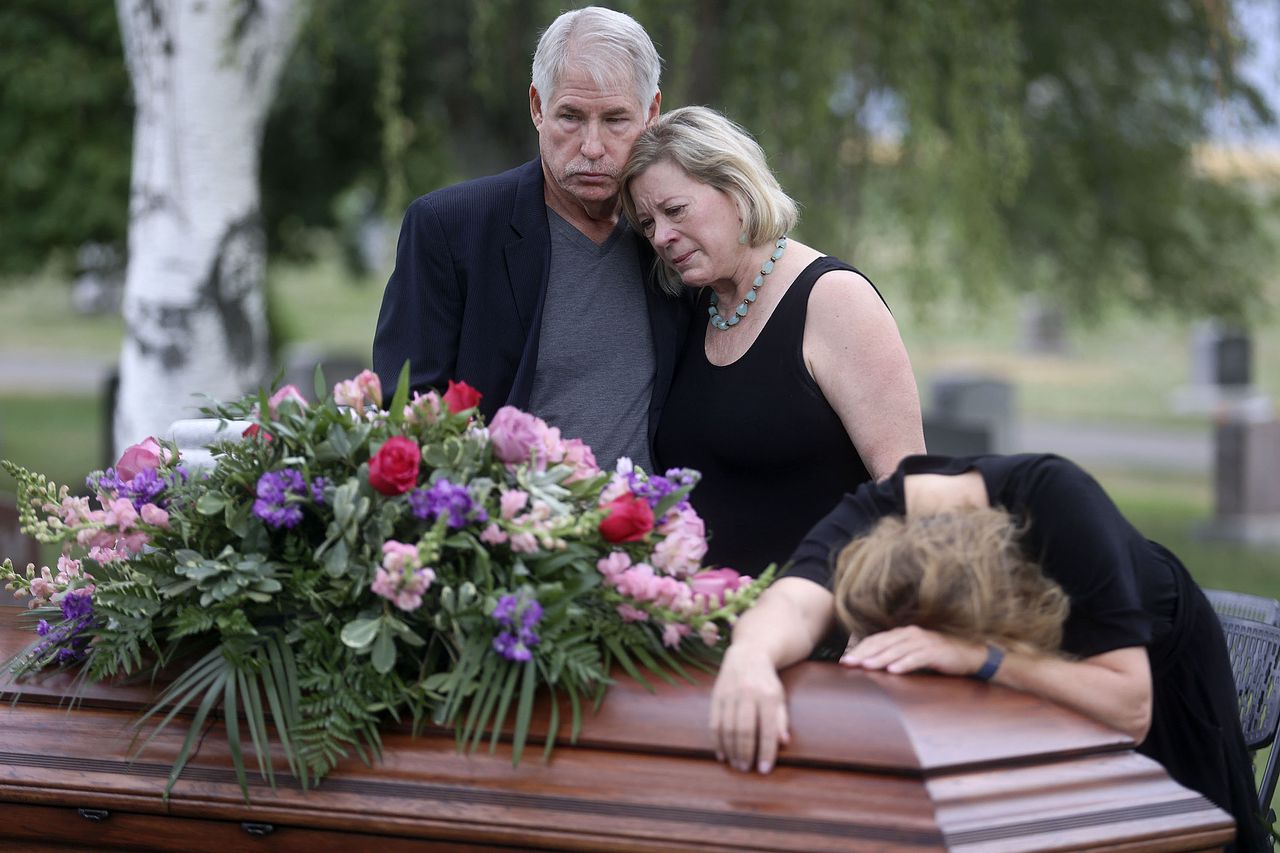 By KATIE McKELLAR and KATIE WORKMAN, The Deseret News and KSL.com

SALT LAKE CITY (AP) — “We as a family and a community failed Shawna.”

That’s what Tricia Wright said as she held back tears during the funeral for her older sister, Shawna Wright, on Monday.

“She had value beyond what people saw when they saw her on the street.”

The two sisters spoke at the service for a woman whose death on the streets of Salt Lake City in Fourth of July heat has sparked remorse and outrage on social media. Her obituary, written in frank terms by Tricia Wright, spelled out why her family believes her death may have been preventable if not for failures in Utah’s mental health and homelessness systems.

Shawna Wright’s death and obituary also captured the attention of Utah homelessness leaders and mental health advocates, who said this week it spotlights the complexity of mental health issues, the gaps in the systems, and the cost of when victims fall through those cracks.

Shawna Erin Wright, 62, of Salt Lake City, died in Salt Lake City heat while she was in the midst of a mental crisis, “after a long battle with mental illness,” Tricia Wright wrote in the obituary published Sunday.

“She died alone on the streets because our system did not allow her family to compel her to get care and would not provide her with low barrier housing that would keep her from the heat while she was acutely psychotic,” the obituary reads. “Shawna never hurt anyone, yet spent a year in jail because it was the only way for our flawed system to get her the care she so desperately needed.”

Wright’s family agreed to discuss their sister’s death with KSL.com and the Deseret News in order to bring awareness to mental health issues and highlight possible policy changes that could have helped — because they said they don’t want their sister’s death to be in vain.

In those interviews, Tricia Wright and Knighton said their sister suffered from bipolar and schizoaffective disorder.

“She was the nicest human being, and she was not a threat to anybody,” Tricia Wright said. “Yes, she could be scary when she was not under medication. She was much more of a threat to herself.”

“They pressed criminal assault charges, because it was the only way to compel her to take medication,” Knighton recalled, adding there should be ways of helping mentally ill people without incarceration.

Shawna Wright spent about a year in the Salt Lake County Jail for the aggravated assault charge, a class A misdemeanor, until she was released in May 2019, according to court records.

After jail, she struggled to find housing because of her criminal record, the sisters said, and was unwilling to work with the predominant mental health provider for the homeless in the Salt Lake Valley on finding housing because it had been involved in pressing the assault charge against her.

Instead, Wright lived with her parents, where her sisters said she flourished while taking care of them, tending their roses, and playing the saxophone.

“She did really well with my parents for two years. She took very good care of them, but they were also in their late 80s,” Knighton said. “Inevitably, when they died, she was left in the same situation — and we had no one to call, no one to talk to, you know, no support whatsoever.”

Wright’s mother died in June 2020 and her father died in March 2021, at which point the sisters said Shawna “lost her sense of purpose.” She began attacking the house and stopped taking her medication, fearing that it would give her heart problems.

“Even with all of that, you know, they couldn’t compel her to get treatment. The police couldn’t take her to the University Hospital,” Knighton said, adding that both sisters had spare rooms, but Shawna Wright refused to live with her siblings.

“There’s some free will there,” Knighton said. Instead, they planned to help her acquire housing and use their money to pay her rent.

The sisters said they believe that if Shawna Wright had been able to secure housing, she might still be alive today. But they ran into problems.

“When we went into the housing authority to try and find out what was available, we expected a row of computers, some people there to help, social workers,” Knighton said. Instead she described “one person at the front desk” who simply told them to apply online. Shawna Wright believed online applications were not secure and was afraid to give her identifying information on anything but paper, Tricia Wright said.

“We’re very intelligent people, and we could not figure out the system — with money,” Knighton said. “We can’t even imagine how anybody who doesn’t have any support system, who doesn’t have money, who has language barriers, everything else, how they even try and negotiate how to find housing.”

In San Francisco, where Tricia Wright lives, there’s single-room occupancy housing for the homeless, she said. Such an option would have allowed her sister to live in a room by herself. Due to her episodes of psychosis, sharing a room was impossible for Shawna Wright.

“If she had had a place to at least have a room with a bathroom that she could put herself and lock the door, I think that would go a long way to ensure safety,” Wright said.

Unable to find an apartment, Shawna Wright decided to go to a Salt Lake homeless shelter. She only lasted there for four days before she checked herself out and “became one of the homeless statistics,” the sisters said.

Her body was discovered three blocks from the Gail Miller Homeless Resource Center in an alleyway across from a 7-Eleven, according to her family. The medical examiner told them heat exhaustion and dehydration caused her death.

“There’s only so much we can do as a society, but I think if she had had access to housing, she would not have died alone,” Knighton said.

The sisters noted that Shawna Wright did go off her medication every couple of years, but they said a dedicated caseworker or housing advocate might have been able to save her this time.

“Looking back at her life, we have to realize that Shawna was on her own path,” Wright said. “There were times we could intervene, but her disease was severe.”

One of the biggest problems, the sisters stressed, was what they see as too high of a bar to compel involuntary mental health intervention for someone experiencing a crisis.

Years ago, Shawna Wright decided to “fight the nukes” and drove into the Nevada desert without adequate food and water, her family said. She crashed her car and stayed in the desert for multiple days before her parents were contacted and showed up to help.

“Nevada had a lower threshold of being a danger to yourself,” Knighton said. “It was not an imminent danger — it was that they exhibited behavior that clearly shows they were not of sound mind and couldn’t take care of themselves, take care of their financial obligations.”

In Nevada, they were able to get her mental help in that case, Knighton recalled. But in Utah, it’s not so easy.

“The threshold here is too high,” she said.

Current Utah law allows an adult to be involuntarily committed to a local mental health authority, either with a written application from a responsible adult “who has reason to know” the person is “likely to pose substantial danger to self or others if not restrained” and a certification by a licensed physician stating they have examined the person within a three-day period immediately preceding that certification,” and that the physician believes the person “poses a substantial danger to self or others.”

Or, Utah law allows a police officer or a mental health officer who has probable cause to believe the person poses a “substantial danger to self or others” to complete a temporary commitment application.

Rob Wesemann, executive director of the Utah chapter of the National Alliance on Mental Illness, said Wright’s case highlights “there are individuals who would benefit from compelled treatment,” but cases can get complicated depending on individual circumstances — even if that means they risk freezing to death or overheating on the streets.

“Part of the challenge becomes when someone is in a situation where someone would say, ‘Gosh, I think that person is in danger,’ be it their physical safety being out there in the elements,” he said. “But that gets really tough (if) the individual says, ‘No, I’m fine, I don’t want any help,’ even if the people around them say, ‘Oh my gosh, it’s 110 degrees.’”

Those issues, Wesemann pointed out, aren’t “spelled out in statute.”

Wright’s case, Wesemann said, highlights the sad reality that “people do fall through the cracks.”

“There are limited ways for people to access mental health care when there is a serious mental health condition at play,” he said. “Locally in our community, really you have to be a specific danger to yourself or others before you can be compelled to receive treatment or committed to receive treatment. Otherwise it really is up to the individual if they are an adult. It is up to them whether or not they seek treatment, accept treatment, etc.”

However, there’s another related issue that a Utah lawmaker is eying in Utah code.

Even if a person is involuntarily committed, that can only last up to 24 hours under Utah’s current law — unless extended by a judge’s order.

Told about Wright’s death — and her family’s frustrations about Utah’s law compared to Nevada’s — a lawmaker who has run dozens of bills seeking to improve Utah’s mental health system said Tuesday he’s working on a new bill to help Utah families keep their loved ones safer in mental health crises.

Eliason said 24 hours is a challenging time period for a judge to receive “sufficient evidence” in order to justify a longer hold. It’s likely someone may not even be evaluated by a psychiatrist in that short of a time frame, he said.

Eliason called the issues around Wright’s death complicated and tragic, and he hopes expanding Utah’s emergency mental health hold period could help more people like her.

“My heart goes out to this family for the loss of their loved one,” Eliason said. “Mental illness takes far too many lives, and we know that there are many components of our system that can be improved. I would hope through this additional legislation that people like Shawna will be less likely to fall between the cracks.”

The situation that their sister died in remains a daily reality for the loved ones of other families.

“When we see people on the street who are homeless, we need to realize that they are somebody’s child, sister, brother, uncle, son, daughter, and that their lives really do matter, and they are people, and that her life mattered,” Tricia Wright said.

Instead of flowers, the family asked for donations to The Road Home, one of Utah’s largest homeless services operators in Salt Lake County.

MARQUETTE — There’s never a bad time to think about your mental health: Where it stands, how you can improve it, and where to go for help if you need … END_OF_DOCUMENT_TOKEN_TO_BE_REPLACED