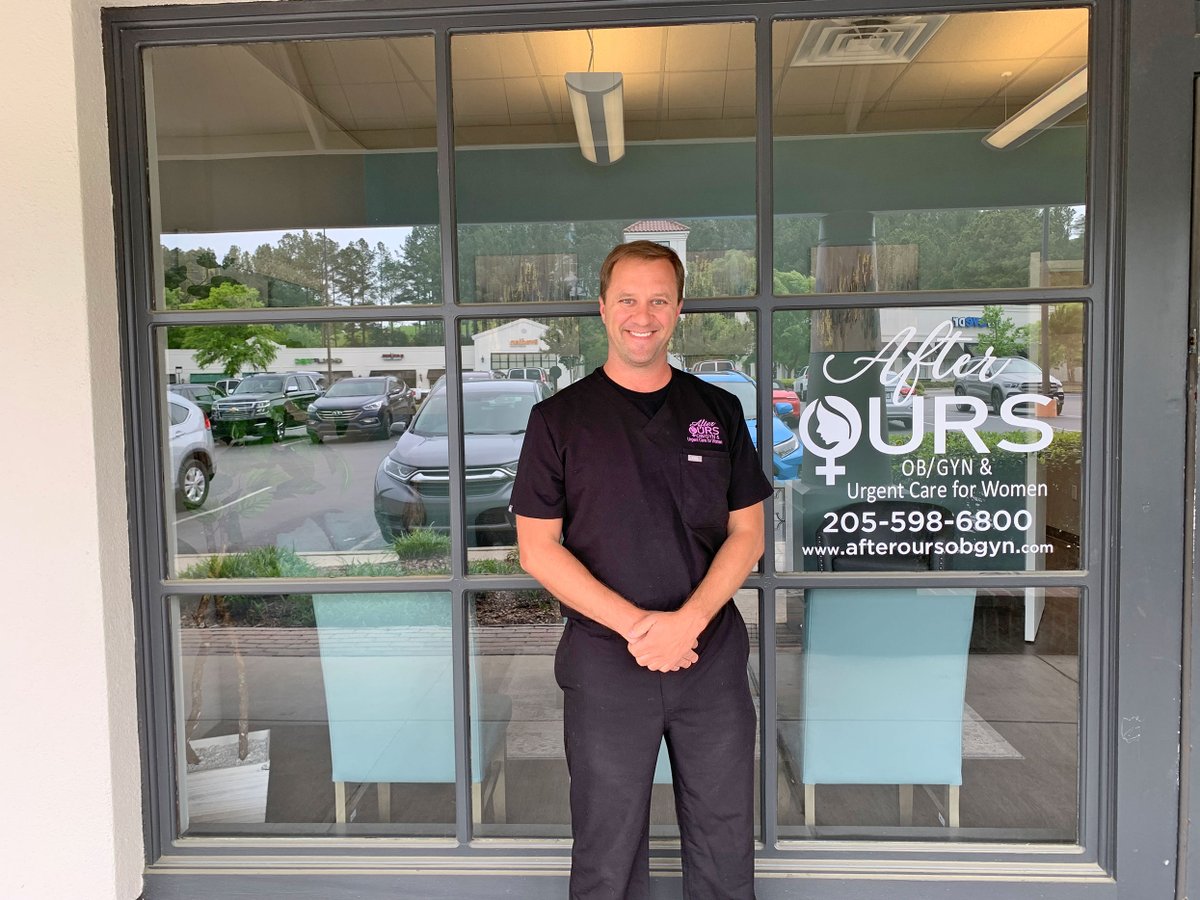 As an OB-GYN, Dr. Bill Hudson knew there had to be an easier and more convenient way for his patients to receive their health care.

After spending time working at two area hospitals over a five-year period, he decided it was time for a change.

When he left his previous practice, he hired staff to work out of the kitchen in his home, taking calls and scheduling appointments and used triage rooms and other doctor’s offices to see his patients.

In December, he opened his three offices of his new practice, After Ours OB-GYN and Urgent Care For Women, as a way to accomplish those goals and more. With locations around metro Birmingham at the Colonnade, Homewood and Trussville, and a fourth location set to open in Gardendale later this year, Hudson splits time between the practices and is a women’s health nurse practitioner at each one during regular hours.

Hudson has spent almost his entire life in the Birmingham area. His family moved to Bluff Park when he was three years old. He attended medical school at UAB and completed his residence in Obstetrics and Gynecology at the University of Mississippi Medical Center. After completing his residency training, he practiced with his father, Dr. Charles Hudson, who was also an OB-GYN, at St. Vincent’s Hospital.

The idea for this new style of practice came from complaints he often heard from patients. Many of them neglect their own health for a variety of reasons, including not wanting to endure long waits, having to use sick time or vacation or not wanting to deal with the hassle of a long commute and a large parking deck.

“I started looking at market research and read that only 40 percent of the women of age between 18-80 that need routine care are actually going to the doctor,” Hudson said. “I thought, instead of just doing the same model that is a big practice at a hospital, how can we adjust their schedule?”

Patients with an immediate need are often called to go to the emergency room when their regular OB-GYN can’t fit them in, and they may not want to visit a provider who is not aware of their issues or not well-trained in obstetrics and gynecology.

Hudson said at his practice, they are committed to being there for women when other practices are closing their doors. But, he also wanted to take it further, with convenient locations, dedicated providers, convenient front-door parking and hours that fit a busy lifestyle.

“The healthcare system has been failing to meet us where we are, and I decided to change this,” Hudson said. “I thought, what if our health care made itself available to us, instead of expecting us to rearrange our lives for our health care? That is how After Ours OB/GYN and Urgent Care for Women was born.”

He hopes that women will visit and see the difference in their model. They offer dozens of types of obstetrics including prenatal care, ultrasound, delivery planning, post-partum care and the gynecology services including cancer screenings, infertility evaluation and treatment, adolescent gynecology, bleeding, hormone replacement therapy and more.

After Ours OB-GYN offers 30-minute appointment slots and does not double book patients. When a patient calls for an appointment, the line rings on every phone at every location.

Once a patient is seen, their office will send their medical records to their preferred doctor.

Hudson’s schedule is surgery and inductions on Mondays at Grandview Medical Center. He is at the Trussville location on Tuesdays, at the Colonnade on Wednesdays, spends Thursdays at Homewood and takes care of administrative duties on Fridays. The Women’s Health Nurse Practitioners are at each location Monday through Friday.

“If a patient needs a procedure done, I try to front load those on schedule and stay and help the WHNPs the days I’m at each location,” he said. “The idea is to have nobody wait. We want to try not to inconvenience anyone and get them out the door within an hour and want them to be happy with their experience.”

As for future plans, Hudson has recently hired an WHNP for the soon-to-be opened Gardendale location and hopes to bring on another doctor later this year.

As the practice continues to grow, he also plans to start doing some Saturday and Sunday hours for emergencies.

“Once it gets big enough, I would love to grow out of where we are and have a one-stop everything,” he said.

Hudson is also a Shelby County resident, and he lives in the Greystone/Shoal Creek area with his wife and four children. They own two dogs, three cats, two rabbits, two pygmy goats and 10 chickens.

To make an appointment or for more information, visit afteroursobgyn.com.

MARQUETTE — There’s never a bad time to think about your mental health: Where it stands, how you can improve it, and where to go for help if you need … END_OF_DOCUMENT_TOKEN_TO_BE_REPLACED