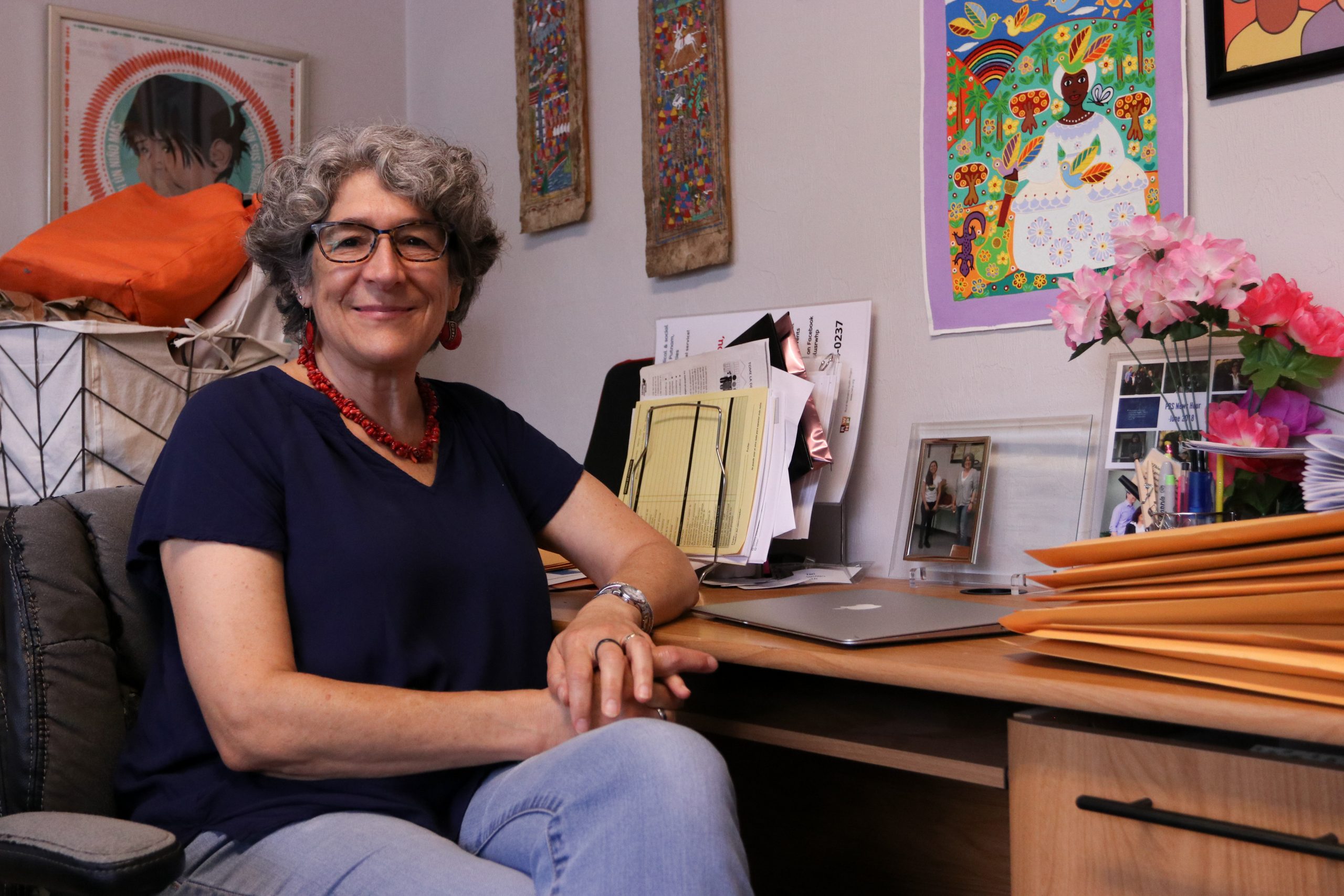 Mayor Lauren Poe was eight months into his first term in 2016 when he proclaimed Gainesville a “Welcoming City” — Florida’s first. At the ceremony, attendees lit candles and sang “This Little Light of Mine.”

But after criteria were developed the next year for cities to become certified as welcoming, local immigration advocates discovered the city was a long way from meeting them.

Two proposals for American Rescue Plan funding the city commission will consider next month could move Gainesville closer to backing its proclamation with policy. The proposals seek to expand language access and community ID services.

Lola Pak serves as communications director for the nonprofit that developed the certification program —Welcoming America, headquartered in Decatur, Georgia. Pak said they created the program to solve the lack of clarity around what it meant to be a welcoming city.

“We realized that there were a lot of different understandings of what it meant to be a welcoming place,” Pak said. “It was a very loose definition.”

The criteria provide a roadmap for cities like Gainesville that want to be welcoming to immigrants but may not know how. Pak said the process also helps the city build bridges with immigrant communities. The goal is not piecemeal representation, but bringing immigrants to the table in every aspect of the community.

The program caught the eye of Deborah Bowie, assistant city manager for Gainesville.

“The more I dug into it,” Bowie said. “The more I thought, gosh, we are a ways away from saying we’re certified.”

Bowie helped the city obtain Gateways for Growth research and technical assistance grants, in-kind support valued at $10,000, to improve immigrant inclusion. Gainesville was one of 19 cities in 2020 to receive the grants, which are a collaboration between Welcoming America and New American Economy.

There are two goals of the grants — to form a strategy for the city to become more inclusive to immigrants, and to produce research showing the economic impact of immigrants on the region.

Bowie teamed up with Robin Lewy, director of programming for Rural Women’s Health Project, and Sophia Corudego, a research assistant for the city, to form the Gainesville Immigrant Neighbor Inclusion Initiative. With help from the grant program, GINI aims to provide community-informed recommendations to the city to improve immigrant inclusion, equity and safety.

GINI conducted four listening sessions, including one in Spanish, to determine first steps and identify obstacles.

Or as Lewy put it: “What can we actually do that’s low-hanging fruit?”

Out of those sessions came two proposals — one from GINI and one in conjunction with the Human Rights Coalition of Alachua County— that are among more than 60 others the city commission will consider in August when allocating $32 million in American Rescue Plan funding.

The American Rescue Plan funds are intended to relieve disparities that were worsened during the pandemic, something GINI leadership said certainly applies to immigrant communities. When they learned of the funding opportunity, GINI sped up their timeline.

GINI and the Human Rights Coalition are some of the only non-commissioner entities who submitted proposals between the announcement of the federal program in mid-March and the submission deadline earlier this month.

GINI is requesting $1 million for a three-year pilot language access program, and together with the Human Rights Coalition, $225,000 for the ongoing community ID program.

The intention of language access, according to Lewy, is to build both the recognition of immigrants and refugees in our community and equal access to information and services. The latter, Lewy pointed out, is required under Title VI of the Civil Rights Act.

“So we’re not asking for something that’s out of the blue,” she said. “This is something that our community should already be engaged in.”

The pandemic hit on already-existing cracks in the system.

The Rural Women’s Health Project reported being the sole provider of information on health recommendations and local ordinances for 521 non-English speaking Latinos in the county during the early months of the pandemic. They gave 1,100 pounds of emergency foods to Latino immigrant non-English speakers who were unable to locate or safely access food distribution because announcements were only available in English. Between April and June 1 of this year, they took 1,158 calls from monolingual Spanish speakers wanting COVID vaccines but unsure how or where to access them.

“It’s not just information, but information is the first step. And that, I think, is what the language access proposal is about. We respect immigrants and all adults as intelligent people. But you just have to have information.”

The proposal recommends the establishment of an immigrant liaison, a Gainesville City Language Access Plan, hands-on training of all city employees, translation of vital city information including its website, social media and alerts, city signage in multiple languages, and an immigrant neighbor guide.

GINI leadership hopes the city can be a great pilot for the county, the university and the school system to replicate.

The second proposal aims to expand the Human Rights Coalition’s community ID program. The community ID offers an alternative to government issued identification, which serves not just undocumented immigrants but people experiencing homelessness, trans individuals, those recently released from incarceration, and others.

The ID program is a low-cost way to lower barriers to a wide range of vital services, including banking, housing, healthcare, and education — the kind of “low-hanging fruit” GINI set out to identify.

The program currently reaches about 350 individuals per year without any guaranteed funding. Currently, the only revenue source is the $10 fee for each ID. With additional funding, it would aim to serve between 2,000 and 3,000 community members.

Additional funding could also help expand the number of languages they offer services in, according to the coalition’s director of immigration concerns Liz Ibarrola, and enable them to establish a regular presence at places that serve transitory populations who can’t always access these kinds of services, like the GRACE Marketplace homeless shelter.

Whether the proposals will receive funding, and how much, is to be determined. But according to Pak, the partnership GINI represents between the city and nonprofits is remarkable.

“That isn’t the case across the board,” Pak said.

Lewy said city leadership has taken several promising steps this past year. They were quick to begin offering the town halls in Spanish after Lewy pointed out the need during the pandemic, Lewy said. They also gave city funds to the Human Rights Coalition to disperse to people who didn’t qualify for the stimulus checks because they lacked Social Security numbers.

Lewy believes the city is willing to work toward equity for its immigrant neighbors. There’s a long road ahead, she said, but these two proposals would take Gainesville a long way toward being able to check off those certification boxes.

And while certification would be a nice marker, it’s not GINI’s end goal.

The much more important question for Bowie is: “Have we figured out a way to include people in our services that were not here before? And are we doing it as just a way that we do business?”

“To me, the opportunity is: How much more entrepreneurship can we build up in our community? It’s about empowering people with information and knowledge and resources and networks, so they can become more contributory toward the community they live in.”

Lewy pointed out the enormous profits the migrant worker driven blueberry industry brings to the county, but said the conversation about immigrants goes well beyond migrant workers.

“We recognize that in all communities, just like in Gainesville, immigrants are serving our community at every level,” Lewy said. “And each one of them will make an economic impact. They spend their money here, they consider this home. And they should be equally recognized. No matter if they are the person with the PhD or the person who puts the food on your table.”

Total funds being requested across the 60 proposals is more than the $32 million the city commission has to disperse. Commission members will need to weigh GINI’s proposals against items ranging from rent and utilities debt relief to connecting pedestrian and bike trails.

MARQUETTE — There’s never a bad time to think about your mental health: Where it stands, how you can improve it, and where to go for help if you need … END_OF_DOCUMENT_TOKEN_TO_BE_REPLACED