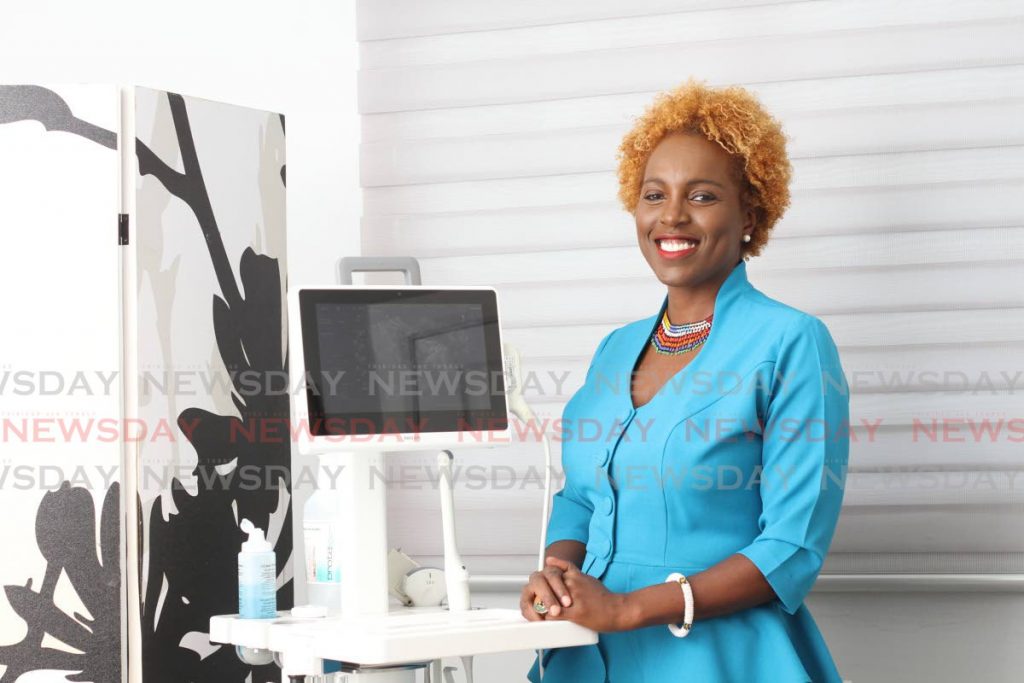 Dr Shevon Joseph has lost count of the number of babies she has delivered over the years. And although she has thoroughly enjoyed that aspect of her medical practice, Joseph is now choosing instead to focus on preparing women for pregnancy and offering comprehensive women’s health care.

“I worked at the Long Island Jewish Medical Centre in New York (now Northwell Health) for years. That hospital is known for delivering 78,000 babies a year.

“I delivered some of them and each one was a miracle, special, and rewarding. I know I can do it with my eyes closed, but I felt I needed to make a pivot and I no longer practise obstetrics.”

An American Board of Obstetrics and Gynecology certified physician, Joseph is the medical director and consultant physician at Azalea Health, a Woodbrook-based clinic that provides gynaecological healthcare and health education for women.

“At Azalea Health our goal is to empower and educate women about their sexual health and well-being,” Joseph told WMN.

She knows the importance of helping women understand their bodies all too well, having worked for over a decade in large urban healthcare centres abroad, providing care to minority and immigrant populations – experiences she describes as invaluable.

“I encountered women from all over the world – Mexico, China, Iraq, the West Indies… This high, fast-paced inner-city population instilled in me a certain level of confidence, because we were also dealing with issues like teen pregnancy, an active HIV population, abuse etc…I’ve treated female prisoners handcuffed to their beds, gunshot victims, you name it. Those experiences cannot be replaced.”

Now, she just wants to sit with women who come to her office and be able to explain what is happening, why and what they can do about it.

“I work strictly by appointments. I cannot do busy waiting rooms any more. I’ve grown weary of that.”

Joseph, 43, is a graduate of Howard University in Washington, DC, and Temple University School of Medicine in Philadelphia. Before leaving TT to study abroad, she attended St Joseph’s Convent and Presentation College in San Fernando.

“That’s when Pres used to accept girls to do A-Levels,” she said.

Originally from Claxton Bay, Joseph said she grew up in family with four sisters and one brother.

“Six of us growing up in a house was total madness. It was noisy and fun. We were close in age so the lime would always be sweet. We are very close and from the minute I left TT to the time I came back, I’ve always had the support of my tribe. I had a childhood where even though I didn’t grow up rich, I didn’t feel poor.”

While in sixth form Joseph was accepted to Howard to do a combined bachelor’s and MD programme. She was one of a small group chosen to do eight years of study in six years. Because it was so intense, one condition was that they were not allowed to work while in the programme. But because her parents could not afford to pay for all her expenses, Joseph didn’t complete the programme and instead did a bachelor’s degree in biology.

Dr Shevon Joseph, an American Board of Obstetrics and Gynecology certified physician, is the medical director and consultant physician at Azalea Health which provides gynaecological healthcare and health education for women. – Marvin Hamilton

“I worked in a bank, in restaurants, as a panini girl in DC. My parents helped where they could and I always tried to get scholarships wherever I could.”

She graduated from Howard in 1999 and took loans to put herself through med school.

“I was employed by New York City in what is called a loan repayment programme, which allowed me to work and pay my loans…They assigned doctors to areas of need, such as the free clinics in the Bronx.”

After living in the US for over 20 years, Joseph returned to TT in 2017 and started Azalea Health.

“I thought of going into public health, but I recalled the way it was in New York and there was a lot of burnout. I love to educate and explain, and I wanted to align myself to practising something along those lines… I wanted for average women to be able to access information about healthcare and their bodies… A healthy woman in the household influences other members of the family to take better care of themselves.”

Among the services offered by Azalea are contraceptive services, gynaecological exams and screening, thyroid function screening, STD screening and biopsies and cyst treatment. Joseph said many of her patients are referrals from her network, which includes a variety of practitioners from different healthcare fields.

“I don’t just write prescription. Everyone gets full screening. You have to look at the whole individual and provide services for that. And if I believe one of my patients needs a service I can’t provide, I will refer them to someone who can.”

She is currently doing a study on polycystic ovaries syndrome in TT, which she believes is more prevalent than thought.

“I see myself really crafting this study to become something I can use a model. An algorithm to take some of the gues work out of screening and a shift in how we approach our choices.”

Her clinic’s name, she said, comes from the azalea plant, which has deep, gnarly roots but produces some of the most beautiful flowers.

“I found the name a fitting representation of women. Our roots are deep and we go through mental, emotional and physical challenges, but we still show up, most times looking our best. We know what it is to be feminine and be strong at the same time.”

She said while people see the word “vain” in a bad way, she wishes women could be more vain.

“We as women should be more vain about how we age – healthy, with the least amount of wear and tear on your body,” by treating ourselves right.

While work is important, she said downtime too has its role in good health.

“I love to be on the beach and travel…Downtime for me has to do with music, plants, dancing.” She said she’s always enrolled in a dance class and the restrictions due to the covid19 pandemic have kept her away from them. She has tried an online “bruk wine” class, but it just wasn’t the same as in-person.

“I was probably the oldest in the class, but you wouldn’t be able to tell. I love to dance – hip hop, reggae, soca are my favourite. It’s more about moving hips and getting sweaty. When I was at medical school I had a roommate from Cuba who introduced me to salsa.

“But please don’t ask me to dance anywhere in public!”

Joseph comes from a family of Carnival lovers, so the cancellation of Carnival this year was a disappointment for her.

“When I was in med school I came home to play mas. I worked a few extra shifts to raise money, and sometimes I’d call Daddy and beg. Coming home for Carnival was non-negotiable.”

And in as much as she is hoping to be able to parade the streets for Carnival 2022, as a medical practitioner she knows the value of putting lives first.

MARQUETTE — There’s never a bad time to think about your mental health: Where it stands, how you can improve it, and where to go for help if you need … END_OF_DOCUMENT_TOKEN_TO_BE_REPLACED