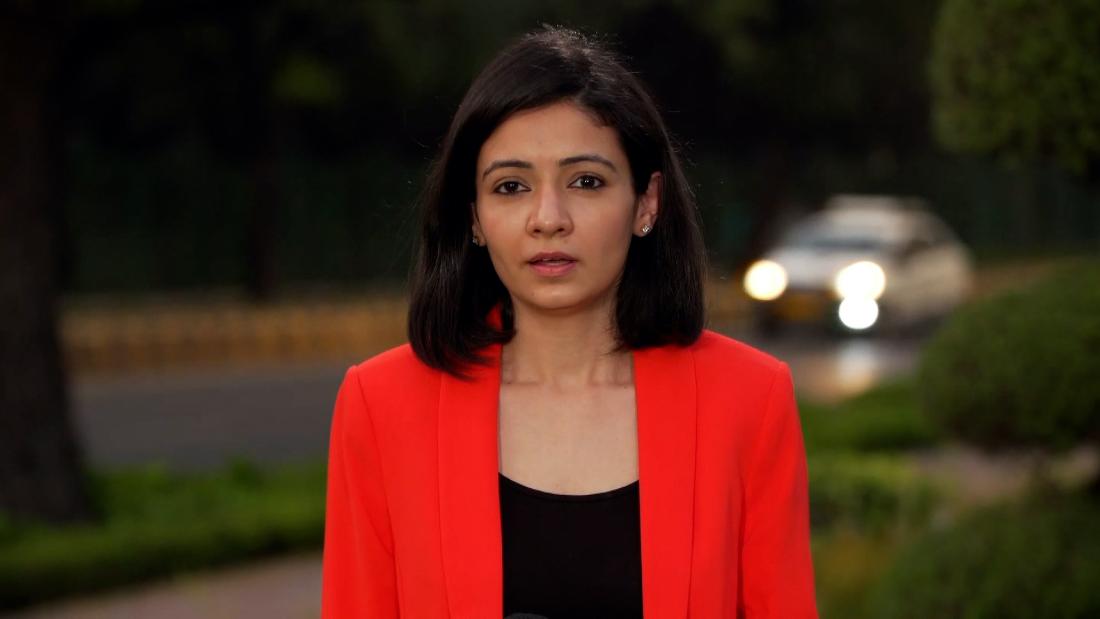 In a war, you know who you’re fighting against. But in this war, the enemy has been an invisible, deadly virus, striking at will — taking someone’s last breath with it.

What can you say to console a grieving son? I approached Madhur with the intent to offer my condolences but failed miserably. Even if I wanted to document his story, this wasn’t the time or place. Holding back my tears, I asked Madhur if I could sit next to him. We sat at two ends of the bench, in complete silence. Almost five minutes later, Madhur said, “This has been the toughest thing I’ve ever done.”

His father, who was being treated for Covid-19, had been discharged from hospital the day before. His twin was still in medical care, and didn’t get to say his final goodbye before their mother died of the virus.

It’s been a dark time for India. Indians have been infected at an alarming rate, and have unexpectedly lost loved ones to Covid-19. Even shutting our doors and windows hasn’t helped. People — young and old, including children who have strictly been following Covid protocols — have fallen prey to the virus.

In April, when I decided to step out to report on the second wave and its deadly impact, my parents were visiting from Kolkata, a city in eastern India and my hometown. I decided to curtail the risk of infecting them. So I packed my bags and checked into a hotel. By then the condominium I live in, home to more than 1,500 people, had reported 57 positive cases.

News of family and friends being infected had already started coming in. Colleagues had lost relatives. This time, the impact of the virus was too close to home.

I told my 5-year-old daughter Anaya that I’d have to step out for a couple of days. Little did we know I’d be living just 20 kilometers (about 12.4 miles) away from her for the next 18 days. Vaccinations for the 18- to 44-year-old age group were to commence a week later. Delhi was gasping for breath. Complaints of oxygen shortages and subsequent deaths were peaking. My country was facing the world’s worst Covid-19 outbreak. I could sense how nervous my husband and parents were. I promised to be as safe as possible.

While my video journalist and I put on our personal protective equipment and face shields in the parking lot of the crematorium, scores of ambulances lined up with grieving families in tow. Bodies on biers, covered in white sheets and bound by rope, were pulled out and taken into the crematorium.

Hindus believe in burning the bodies of their loved ones. Logs are stacked, the body is placed on top and set on fire. Later, families collect the remains and immerse them in a holy river.

An uncomfortable silence enveloped the length and breadth of this final resting place, shattered intermittently by wails of relatives, some in PPE suits, others in masks and face shields. It was 10 a.m. on this day. Most of them had probably stayed up all night — this time grieving for a loved one.

The crematorium was divided into two sections, one for non-Covid bodies and the other for those who died from the virus. The waiting for the Covid section was much longer. A queue to get a token number stretched longer by the hour.

My dilemma as a reporter was: how do I walk up to any of these people, who feel betrayed, abandoned and are in complete grief? I didn’t — rather, I couldn’t. I had never seen anything like this in my life. Wherever I looked, there were bodies — in ambulances, on elevated platforms, even in cars.

Another young man in his late 30s was standing near a burning pyre. His uncle had died of the virus. Speaking to me, Neeraj Pal said they tried calling his phone three days back. There was no response. Worried, they called the hospital to ask after him. It was then they were told that he was no more.

“If we hadn’t called the hospital, we would have been informed much later about his death,” said Pal.

A middle-aged woman slumped into the front seat of her car. Her husband’s lifeless body, rolled up in white cloth, was sitting up on the backseat. Beating her chest, she told me her husband was gasping for breath until the very end. They rushed him to four hospitals, but none took him, she said. He died at home.

“People are not dying of the virus, they’re dying because there are no beds, no oxygen to keep them alive,” she told me.

The most unforgettable image was of children at the crematorium, some as young as four. Many had lost a parent to the virus. This overstretched crematorium would be the last memory they’d have of their loved ones.

According to the Indian government, 577 children lost their parents in a span of 55 days during the second wave.

The situation in hospitals was as morbid as crematoriums. The Covid ward of a private hospital we visited was packed, with no further admissions allowed. For hours, family members had been sitting outside, waiting for news on their loved ones.

Almost 40 minutes later, more than a dozen cars rushed in. They had patients in the backseat, breathless and in distress. Relatives rushed to the ward, requesting oxygen cylinders, but the hospital didn’t have any to spare. An old woman in a wheelchair, a frail old man gasping for breath while his son implored for a hospital bed, another waiting in an ambulance — all eventually turned away.

Helpless guards at the ward entrance kept repeating these words in Hindi: “There’s no bed, no oxygen. Try another hospital.”

A young woman was breathing in the last liter of oxygen from a cylinder, while her family pleaded with hospital authorities for more. Seeing our camera and mic, her relative walked up to me. “You’re from the media, help us,” she said. “They’ll listen to you. I just need one bed for my sister.”

I wanted to help. I ran to the ward. I spoke to a doctor. But I failed — the hospital had exceeded its capacity to accommodate patients.

Sitting in the porch was a woman in a PPE suit. Sonika Babbar had accompanied her sick father and brother to the hospital, brought there by ambulances as her father’s oxygen levels fell. “There are no beds available,” Babbar said. “Patients are lying on the floor inside the ward.”

When I went on air on Becky Anderson’s show “Connect The World” the next evening to share what I’d seen, I couldn’t hold back my tears. It wasn’t easy to set aside my emotions and speak only as a reporter. These were my fellow countrymen.

Deep down, I constantly feared for my family.

Days later, I checked in with Babbar to inquire after her father and brother. Her message is still in my inbox. It reads, “He (the father) expired on May 8.”

On April 30, news of a former colleague and news anchor succumbing to cardiac arrest while recovering from Covid-19 hit me hard. Memories of us getting ready for our shows in the make-up room and talking politics came rushing back. He is survived by his wife, two young daughters and elderly parents.

The next morning, I was scheduled to speak with CNN’s Michael Holmes on India’s staggering caseload. Ten minutes before we were set to go live from the hotel, I received a message on my phone. Another former colleague and friend, Aashiish Kumar, was no more.

Infected with Covid, Kumar’s oxygen levels had dropped. With the help of friends and colleagues, an oxygen cylinder had been delivered to his house. A day later, he was admitted to hospital and had posted a message on Facebook saying he was ” under urgent treatment for severe chest infection due to Covid.”

Before joining CNN, I was a news anchor with one of India’s leading English-language news channels. Kumar was part of the team that produced the show. I’ll always remember him as a young and vibrant former colleague. He’s survived by his parents, sister and wife.

I did go live with Holmes on his show — but broke down in the confines of my hotel room just minutes later.

It must be said that my bosses called me every day, and I always had the option of taking time off. That particular day, however, the emotional toll was just too hard to bear.

That evening, my daughter called. Her innocence and harmless banter were much needed to get through an emotionally draining day. I wanted to hug her and promise that I’d keep her safe. But all I could do was bid her goodnight with a promise to be home soon.

Over the next few days, my condominium complex reported more positive cases. We lost four residents to Covid-19.

On May 3, the union territory of Delhi reported 448 coronavirus fatalities — its highest ever official single-day death toll.

A young woman bade goodbye to her father who, like hundreds of others in Delhi, ran out of breath. Alone and Covid-positive, she reached out to volunteers to help cremate her father. Her mother was recovering from surgery, and her brother was in Australia. Inconsolable, both were connected through a video call to witness the final rites.

The daughter, a journalist, told me she was on a video conference with the doctor in the early hours of the morning when her father breathed his last.

We tracked the same volunteer group, affiliated with the country’s main opposition Congress party, throughout the day. After receiving an SOS call, they rushed to deliver an oxygen cylinder to three-year-old Aayansh, suspected of having Covid. The relief in his father’s eyes upon receiving the cylinder was heart-wrenching. With folded hands, the father — who was also infected — thanked the team, calling them “the men of God.”Social media has been abuzz with desperate pleas for oxygen cylinders, medicines and hospital beds. Many have come forward to help, a ray of light in dark times.

I received calls at least twice a day from home. Conversations with my parents and husband were always brief. They followed my news reports — we never discussed them.

I finally managed an appointment for my first dose of the vaccine. It was scheduled for May 9. The day before, my husband sent me a text saying: “Tomorrow’s Mother’s Day. Anaya’s made a card for you. Can I bring you home for a couple of hours after we get vaccinated?”

I probably needed to see my little one more than she did me. With a double mask and maintaining measured distance from her, I spent a couple of hours with Anaya. She was the balm I needed for my broken soul.

We continued with our on-the-ground news gathering. My colleagues, CNN international correspondents Clarissa Ward and Sam Kiley, visited different states to report on the condition of patients in hospitals and villages while I continued to report from India’s capital.

The silver lining for Delhi has been the sharp fall in its positivity rate in the last month — it’s now below 1%, compared to 36% on April 22.

The casualties have been unprecedented for India, and the war rages on in several states and rural areas. Now, we need to brace for a third wave, as medical experts have warned the next could affect our children more.

They say time heals everything. As a reporter, I must soldier on. As a daughter, sister, wife, mother and daughter-in-law, I’m grateful for my family’s well-being. But as an Indian, a part of me will probably never heal.

MARQUETTE — There’s never a bad time to think about your mental health: Where it stands, how you can improve it, and where to go for help if you need … END_OF_DOCUMENT_TOKEN_TO_BE_REPLACED