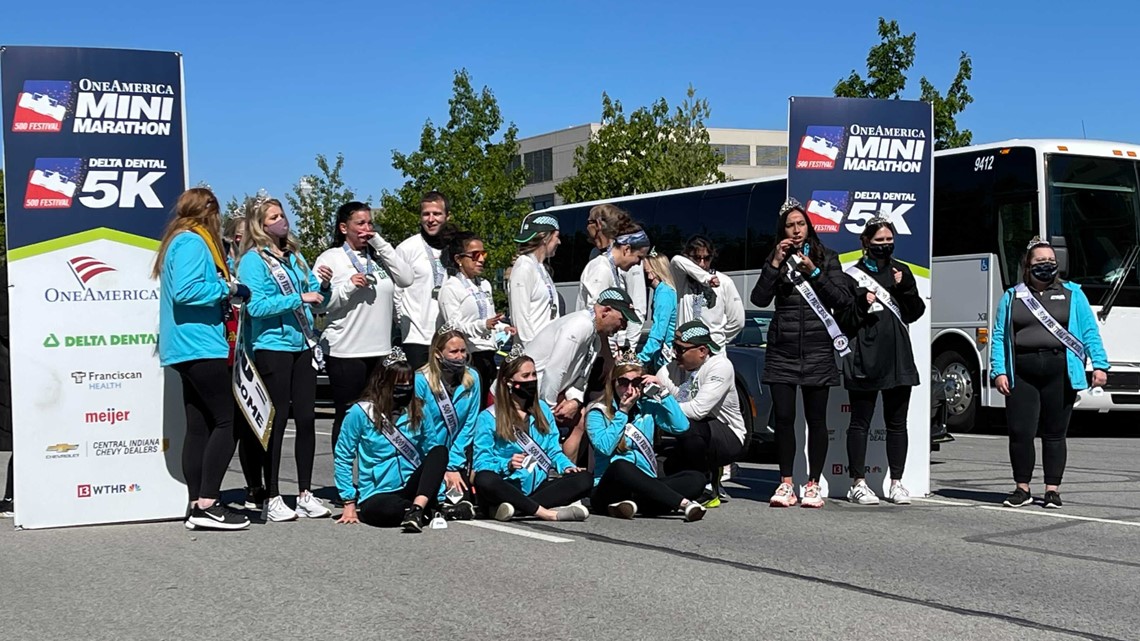 Indy’s mini-marathon may not have been in person this year but a few honorary participants were able to take the traditional route.

INDIANAPOLIS — In years prior, tens of thousands of runners descended upon Indianapolis and took over Circle City while competing in the OneAmerica 500 Festival Mini-Marathon. This year the event went virtual due to the pandemic, but there were a few honorary participants taking on the traditional route of the Indy Mini.

“The OneAmerica 500 Festival Mini-Marathon is so important to this community, so we just thought: ‘Could there be some inspirational pace setters to run the marathon on the route of the morning of the mini for all of those who can’t?’” said Bob Bryant, President and CEO of the 500 Festival.

They decided to honor healthcare heroes.

“I work in the medical progressive care unit. We were the first unit to become a completely COVID-19 unit, it was a little … very overwhelming at first. But we all kinda persevered and everybody came together,” said Annie Burford a Respiratory Therapist at Franciscan Health.

Even though vaccines are now available, and things are opening up, these frontline workers haven’t taken a break from taking care of COVID-19 patients who are extremely ill.

They say knowing they haven’t been forgotten means so much to them.

“I feel special being able to represent my fellow healthcare workers,” said Kara Solomon, the disaster manager at Franciscan Health.

“It’s such an honor for me to be here representing all those who are not able to run today, probably one of my biggest highlights,” said Franciscan Health emergency room nurse Shane Mying.

Woven throughout the festival was an equally touching tribute to a member of the 500 festival family who lost his battle with COVID-19. The thoughtful and heartfelt touches were delicate and meaningful.

On the back of this year’s medals were the words “In memory of Pat Kennedy.” Within the white square that is outlined in green on the shirts are the letters “PWK 34.”

“Pat served on the festival board of directors as well as our foundation board of directors, a long-time mini participant and a volunteer that helped us in the post-race party set up for many years,” said Bryant.

Pat was also the fourth-generation president of a longtime gas tank supplier for the Indy500 called ‘Kennedy Tank and Manufacturing Co.’ The car that was passed down through his family and was sponsored by Kennedy Tank in the 30s and 40s bears the number “34” on it.

Pat used to drive the car around the track “a couple times” a year said his son Jimmy Kennedy. Jimmy said it’s a tradition the family plans to carry on.

During the Indy mini, the laps around the track at the Indianapolis Motor Speedway were carried out by those who knew Pat best, his direct family and his Kennedy Tank family.

“The track was dad’s favorite place in the world he was a huge proponent of the 500 festival and he ran the mini-marathon over 20 times,” said Jimmy.

Any runner will tell you, that running gives you time to think and reflect

“We just want to let dad know that we love him and are certainly thinking about him,” said Jimmy.

Bryant has run the mini-marathon in the past and says running offers you time to reflect on some of the most important things in life.

“Even if you’re running with a group of people you have that solitary time, on average two and a half hours to really be thinking about things. What motivates them? How are they pushing? Even those running virtually, and certainly those here today, are probably going through those emotions. Who are they running for? And what does it mean to them personally, and what does it mean collectively for our community?” said Bryant

For healthcare workers, the honorary pace relay was about honor, gratitude, and hope.

“With vaccines, I feel like we’re almost at the finish line. We’re overcoming this and today, this run is for all those frontline workers who have helped us out through this process,” said Mying.

He said he was proud to represent all the frontline workers who were not able to run in the mini this year.

MARQUETTE — There’s never a bad time to think about your mental health: Where it stands, how you can improve it, and where to go for help if you need … END_OF_DOCUMENT_TOKEN_TO_BE_REPLACED