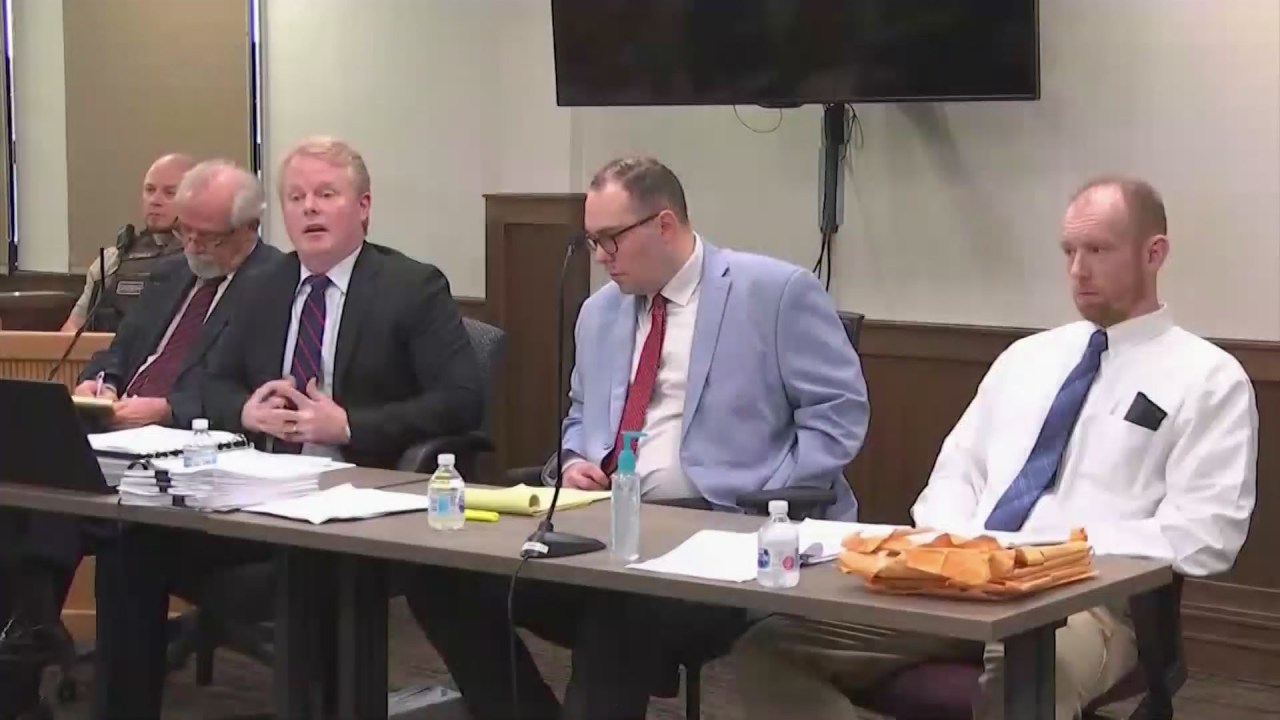 The defense wrapped up its case on Wednesday in the Chad Isaak trial, calling six witnesses to the stand in a little over two hours.

Brooke Williams has been following the trial.

A patient of Isaak’s was asked whether her noon appointment with Dr. Isaak for April 1, 2019, was rescheduled.

That timing is important because the murders were committed the morning of April 1.

And that witness testified that yes, the weekend before the murders, Isaak called and asked to push back her noon appointment for later in the day.

She said he told her he had a dental appointment scheduled and that was the reason for the change. The state, in its rebuttal, set out to prove such an appointment never existed.

The first witness the defense called to the stand was Ben Pace, an RJR employee.

He testified to meeting Isaak when RJR took over the mobile home park as property manager.

“Isn’t it true that that neighbor just said that he waved to her?” said Prosecuting Attorney Gabrielle Goter.
“Yeah,” Pace said.

Pace also explained why a business card with Robert Fakler’s first name written on it may have been found in Isaak’s possession.

“And do you recall, at the end of that conversation, Robert giving Dr. Isaak a business card?” said Walstad.
“Either Robert or myself handed the card to him with his name on it,” Pace said.
“And do you recall writing his name on that card?” asked Walstad.
“I don’t remember writing it that day but in the past, I have done that for Robert,” Pace replied.

The defense also called two of Isaak’s chiropractic patients to the stand.

Both had appointments scheduled with Isaak for the day of the murders and testified that nothing about the chiropractor’s behavior on that day seemed incredibly out of the ordinary.

“Does anything stand out to you about that appointment?” asked Walstad.
“No, nothing was different than any other appointment that I had,” said Joseph Schmit.

“When you spoke to that law enforcement officer, he specifically asked you if there was anything odd about that appointment on April 1st, correct?” said Prosecuting Attorney Karlei Neufeld.
“Yeah,” Schmit replied.
“Do you remember your response?” said Neufeld.
“I said he was going to adjust my neck and then he just kind of walked in the back and he came back and didn’t crack it or adjust it and then we carried on with the appointment,” said Schmit.

“Do you recall Dr. Isaak drinking orange soda from a two-liter?” said Walstad.
“Yeah,” said Schmit.
“And do you recall during that meeting, was the two-liter in the office area?” asked Walstad.
“I do not remember,” Schmit replied.
“Would it be safe to say he wasn’t drinking from the two-liter as he was performing chiropractic treatment on you?” said Walstad.
“Right,” said Schmit.
“Is it possible he got up to take a drink of soda and come back?” Walstad asked.
“Very possible, yeah,” Schmit replied.

The second patient called to the stand, Dora Sorenson, testified she had been a patient of Isaak for years. She saw him monthly and her appointment was almost always for noon on a Monday.

But on April 1, that regular noon appointment on the Monday in question was pushed back at Isaak’s request.

“Do you recall Dr. Isaak calling you the Saturday or Sunday prior and rescheduling that appointment?” asked Walstad.
“Yes, it was normal practice to always call me ahead of time,” said Sorenson.
“And over the 10 years that you had been a patient of Dr. Isaak’s, did he always call you the weekend prior to your Monday treatments?” Walstad asked.
“Yes,” Sorenson replied.
“Why did he always call you on the weekend prior to the treatment?” said Walstad.
“Number one, I had asked him to do that to remind me and I think he just did it out of courtesy also,” said Sorenson.
“So every Saturday, once a month, for nearly 10 years, he would call you?” said Walstad.
“Yes,” Sorenson replied.

“Do you remember when that law enforcement officer asked you how often the defendant canceled or rescheduled appointments?” said Neufeld.
“No,” Sorenson said.
“If I told you that you told that law enforcement officer that it did not happen very often and that he did not cancel appointments, would that surprise you?” said Neufeld.
“No,” Sorenson replied.

The defense noticeably not addressing the dental appointment further until the state brought it to the forefront of questioning, calling rebuttal witnesses to the stand — including a receptionist for a dental office where Isaak was once a patient.

“Do you know whether the defendant had a dental appointment for April 1, 2019?” asked Neufeld.
“He did not,” said Lisa Johansen.

But the witness testified Isaak hadn’t been at the office at all since May 2017.

“And just generally speaking, if a patient were to decide to go to another dental facility, do you typically get a request for that patient’s dental information to be forwarded on to a new dentist?” said Neufeld.
“Most time yes, if they want X-rays transferred,” said Johansen.
“And in this case, did you receive a request from any other dentist asking for the defendant’s information?” said Neufeld.
“We did not,” said Johansen.

Isaak himself did not take the stand in his own defense.

A lot of testimony centered on whether Isaak had that dental appointment.

And that testimony from the dental receptionist who said Isaak did not have an appointment scheduled at their office was the last testimony heard by jurors.

We don’t know how long jury deliberations will take; that’s always something that’s difficult to gauge.

But the judge did address that, saying if jurors have not come to a decision by Friday, he may have them deliberate on Saturday.

If you're shopping domestically as opposed to on the internet, you possibly can test the emblem on Coach shoes or handbags in a granted retailer or … END_OF_DOCUMENT_TOKEN_TO_BE_REPLACED

The distinctive design of the shoe as an entire is one thing that not many runners get to expertise and thus should take pleasure in. A trendy … END_OF_DOCUMENT_TOKEN_TO_BE_REPLACED