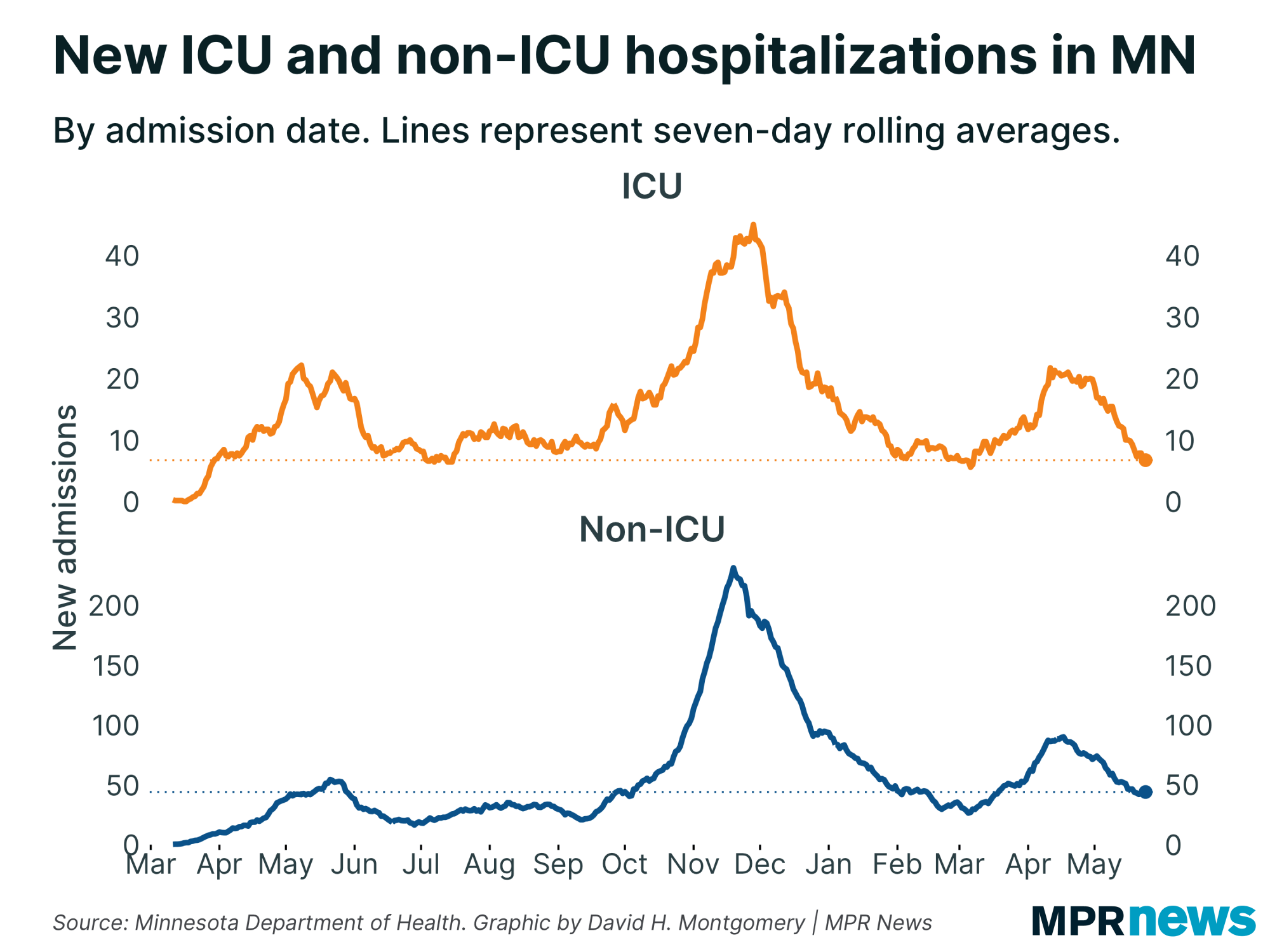 The COVID-19 situation is looking pretty decent this Memorial Day weekend. Statewide masking mandates and capacity limits on restaurants and other public spaces have been lifted, and the disease metrics continue to improve.

New daily cases are trending at their lowest level since just after the Fourth of July. Active cases have receded to mid-September levels. Hospital admissions and intensive care cases are falling.

After an anxious April, the evidence seems clear that Minnesota’s spring surge is over.

Friday’s Health Department report showed the count of known, active COVID-19 cases stayed below 5,000 for the third straight day, the first time that’s happened since mid-September. Active cases are down 75 percent from their most recent high of around 20,000 in mid-April.

There were 316 people hospitalized with COVID-19 in Minnesota; 77 needed intensive care. Both figures continue to trend down from their April peaks. The count of intensive care patients is at its lowest point since March. Five weeks ago, more than 200 people were in ICUs.

New hospital admissions are also trending at their lowest point in more than two months.

Five newly reported deaths put Minnesota’s pandemic toll at 7,408. Among those who have died, about 60 percent had been living in long-term care or assisted-living facilities; most had underlying health problems. 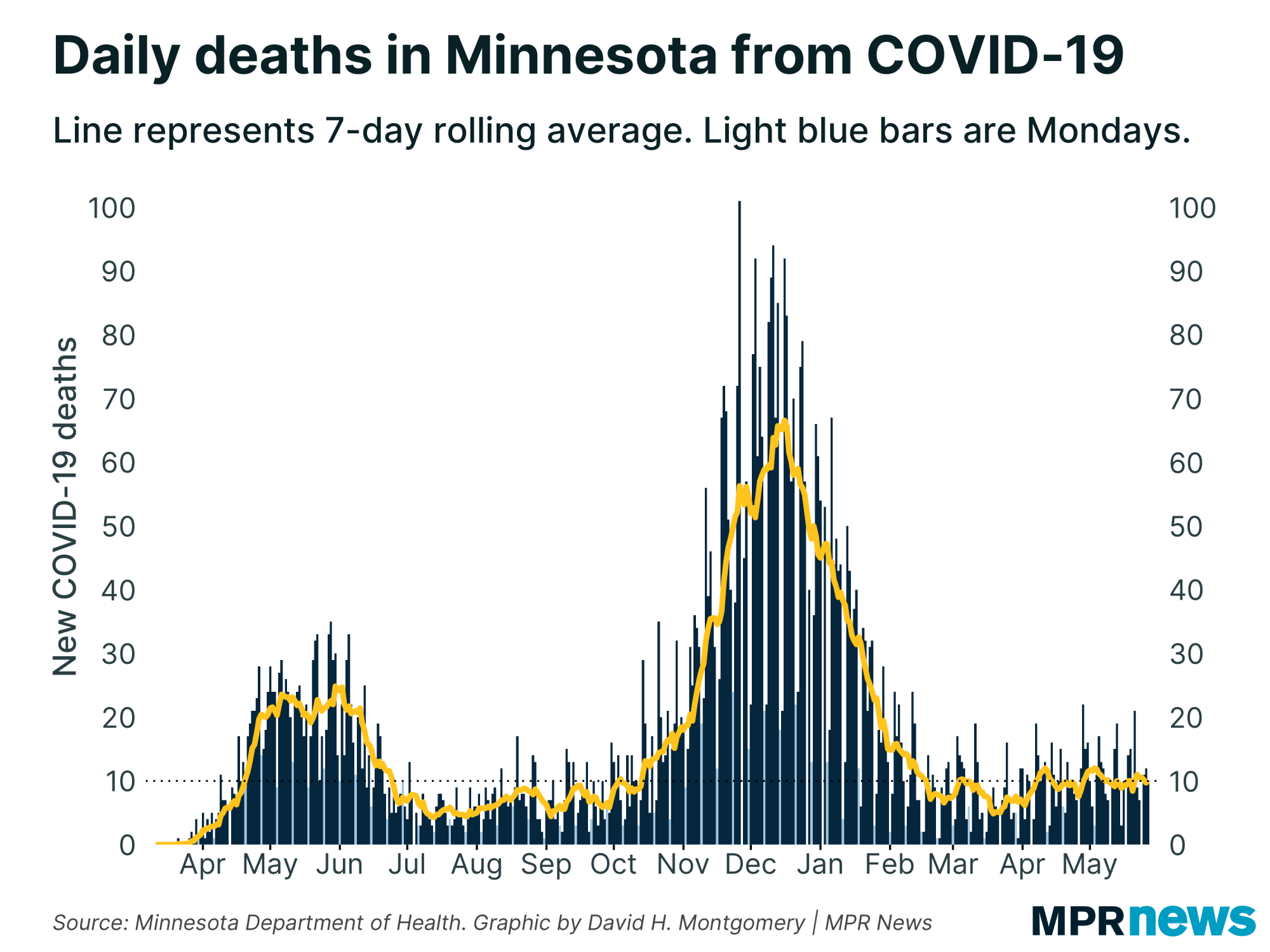 The state has recorded 600,767 total confirmed or probable cases so far in the pandemic, including the 364 posted Friday — the 14th consecutive day of fewer than 1,000 new cases. The seven-day new case average is down to a level last seen around the Fourth of July. 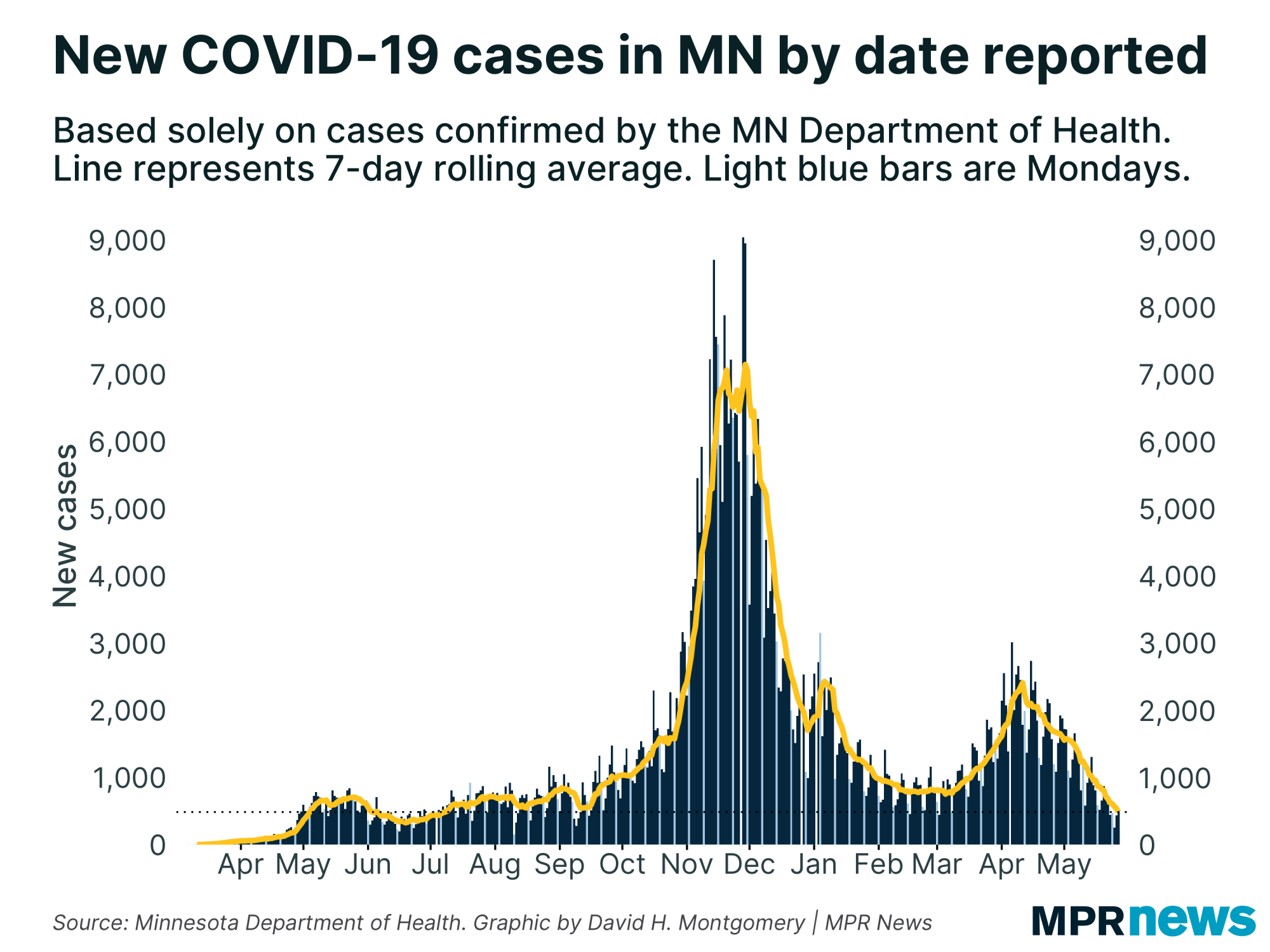 About 98 percent of Minnesotans known to be infected with COVID-19 in the pandemic have recovered to the point where they no longer need to isolate.

Regionally, all parts of Minnesota are in better shape than they were in late November and early December. Case counts had crept up across the state during April, but the trend is clearly on the slide. 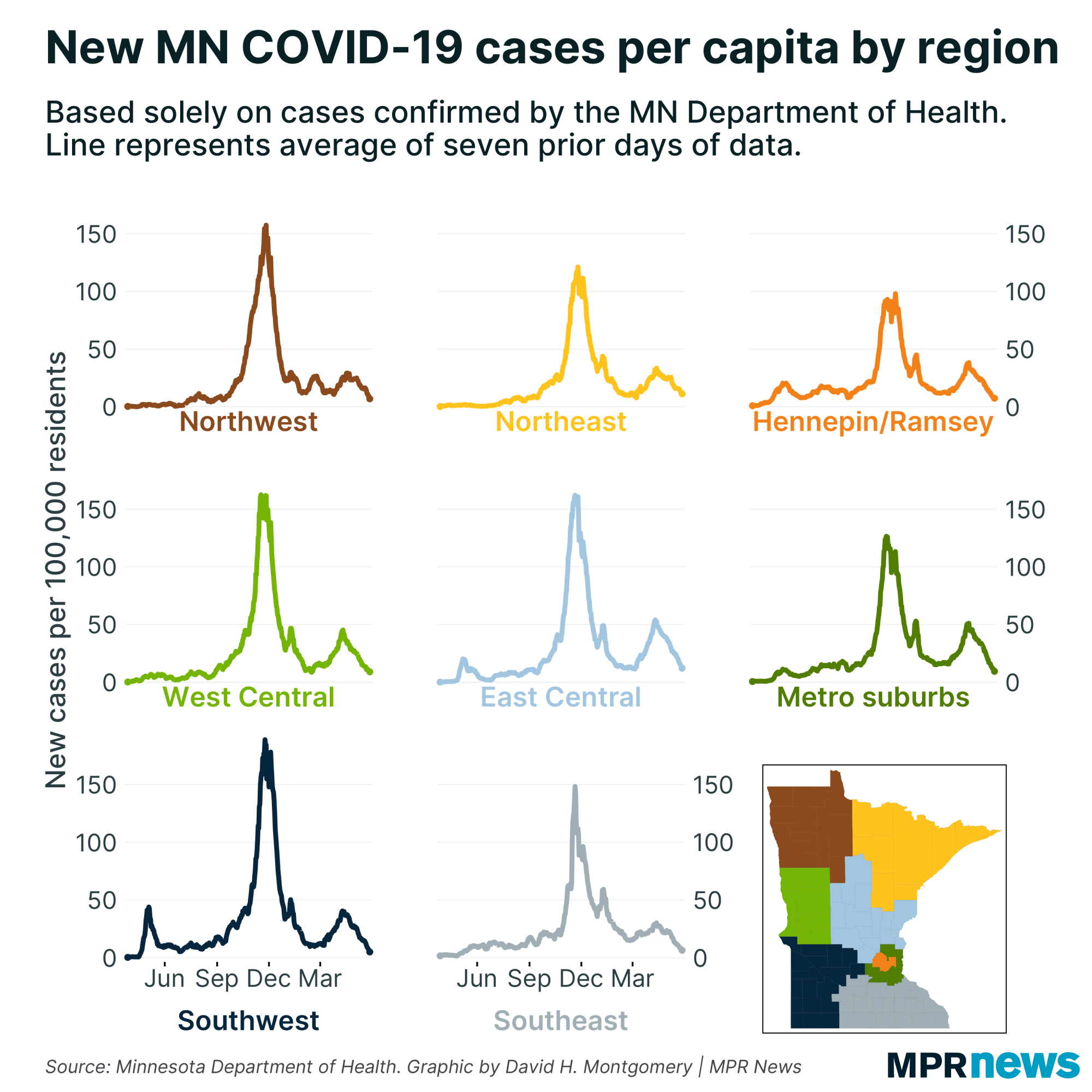 People in their 20s still make up the age bracket with the state’s largest number of confirmed cases — more than 111,000 since the pandemic began. The number of high school-age youth confirmed with the disease has also grown, with more than 49,000 15-to-19-year-olds known to be infected during the pandemic.

Although young people are less likely to feel the worst effects of the disease and end up hospitalized, experts worry they can spread it unknowingly to older relatives and members of other vulnerable populations. Those with the COVID-19 virus can spread it when they don’t have symptoms.

After a roller coaster few months, the seven-day vaccination trend had been stabilizing at around 40,000 shots a day. Friday’s data, though, showed that pace down to 30,000, making it more likely the recent 40,000 rate was an anomaly driven by a backlog of shot data. 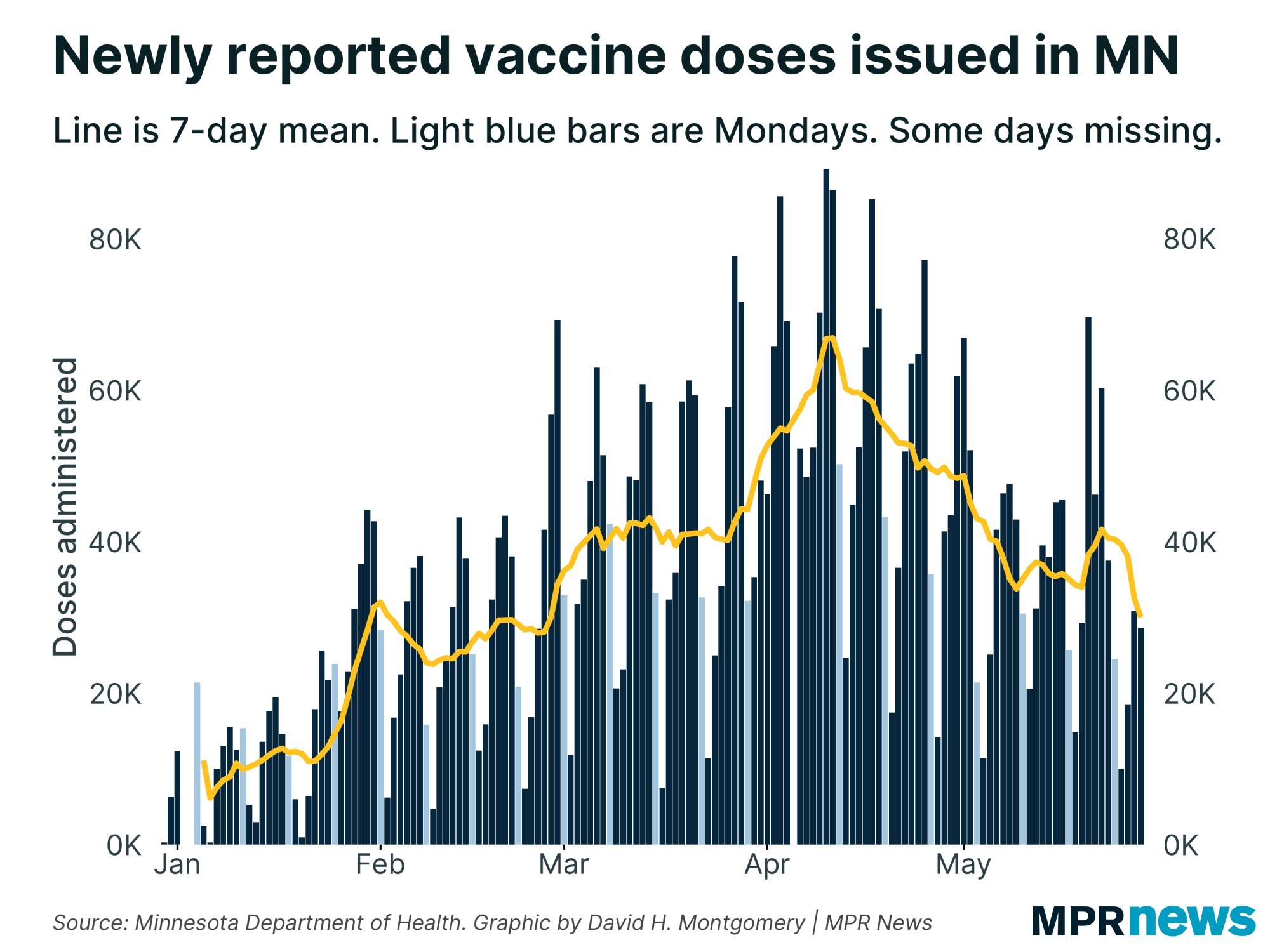 More than 2.8 million residents 16 and older now have at least one vaccine dose. More than 2.5 million have completed their vaccinations as of Friday’s update.

That works out to about 58.1 percent of the 16-and-older population completely vaccinated and 64.2 percent with at least one shot, including 89 percent of those 65 and older. 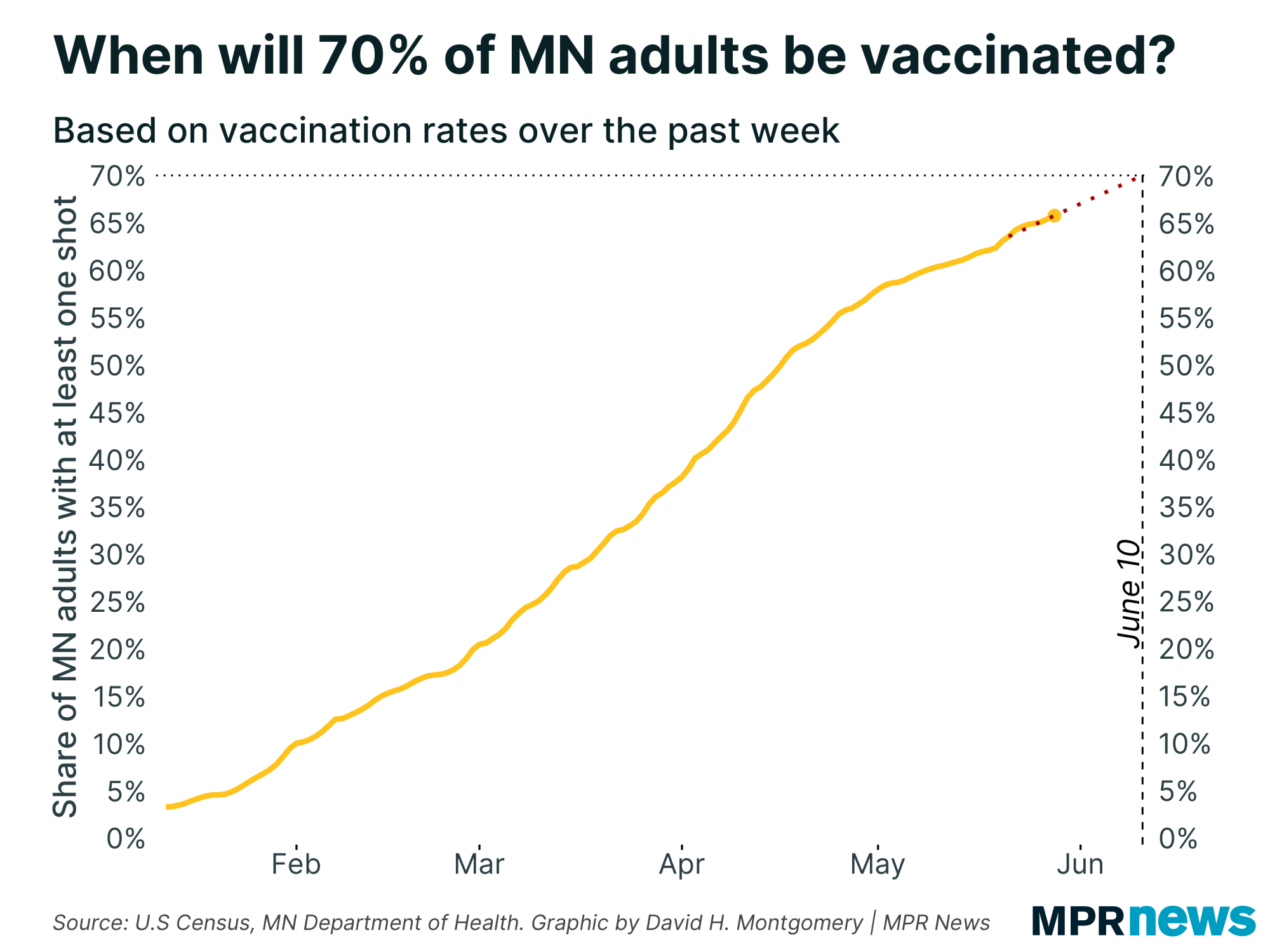 Minnesota’s also seeing notable growth in the number of children ages 12 to 15 getting vaccinated since mid-May, when federal authorities approved the Pfizer vaccine for use at those ages.

State public health leaders have been pleading with those still not vaccinated to get their shots. Eligible Minnesotans can now walk in for a COVID-19 vaccination without an appointment at the state’s community vaccination program locations.

With the disease data solid, state officials are pushing now to boost vaccination counts. Gov. Tim Walz on Thursday rolled out incentives, including state park passes and Minnesota State Fair tickets, to nudge unvaccinated Minnesotans to get their shots. On Friday, he highlighted some post-vaccination perks.

Officials are pressing now to get at least 70 percent of the state’s 16-and-older population vaccinated with at least one dose by July 1.

Data in these graphs are based on the Minnesota Department of Health’s cumulative totals released at 11 a.m. daily. You can find more detailed statistics on COVID-19 at the Health Department website.

You make MPR News possible. Individual donations are behind the clarity in coverage from our reporters across the state, stories that connect us, and conversations that provide perspectives. Help ensure MPR remains a resource that brings Minnesotans together.

Donate today. A gift of $17 makes a difference.

Alice Poindexter spent 30 years living abroad only to return to the South Linden home where she had spent so much of her childhood.In the 1950s, the … END_OF_DOCUMENT_TOKEN_TO_BE_REPLACED

Dillard University will be hosting a virtual Women’s Health Conference June 25-26, 2021, to address the lack of access and racial inequities women, … END_OF_DOCUMENT_TOKEN_TO_BE_REPLACED

A 2019 survey of Cleveland Clinic's MENtion It campaign, which pushes men to see their doctors and discuss their health, highlights the negative … END_OF_DOCUMENT_TOKEN_TO_BE_REPLACED