Subjective lifestyle evaluation prior to the cancer diagnosis

Patients were initially asked to assess their lifestyle prior to the diagnosis of cancer (“Did you lead a healthy life prior to the diagnosis of cancer?”). 105 patients described their lifestyle as healthy, 12 patients as average and 23 as not healthy (Table 1). Patients claiming to have pursued a healthy lifestyle were evaluated regarding obesity, nutrition and physical activity. 54% (n = 57) were found to have a BMI ≥ 25 and were considered overweight. 26% (n = 27) consumed meat daily or several times per day, and 70% (n = 73) ate only one to two portions of fruits or vegetables per day. In 26% of the patients (n = 27), there was an obvious lack of activity (physical exercise less than one to two times per week).

Table 1 Self-assessment of lifestyle prior to malignancy

Patients who modified their lifestyle positively were significantly younger than those who did not (58.4 versus 65.4 years; p = 0.03, Table 2).

A lifestyle improvement was detected in 96% (n = 22) of the patients who described their own lifestyle as unhealthy prior to the diagnosis of cancer. 88% (n = 92) of those who claimed to have a healthy lifestyle prior to the cancer diagnosis were able to further improve their lifestyle (p = 0.5, Table 2).

A reduction in tobacco consumption was found in 63% (n = 12) of current and former smokers after the cancer diagnosis. Four patients reduced their tobacco intake and eight patients quit smoking completely.

Nutritional changes after the cancer diagnosis

65% (n = 92) of the patients described nutritional changes after the cancer diagnosis, particularly in the consumption of fruits/ vegetables, meat and oils/ nuts (Table 4). Furthermore, 9% (n = 12) of patients implemented special diets in order to optimize the oncological treatment effect. A reduction of sugars and carbohydrates, an oil- and protein-rich diet according to Johanna Budwig as well as the Dr. Coy diet and fasting (Rudolf Breuss cancer cure) were among the most frequently used diets. Only one patient underwent formal nutritional counseling.

Table 5 Nutrition before and after cancer diagnosis

Assuming 150 g meat per serving, eating meat is recommended to be limited to a maximum of two times per week (Deutsche Gesellschaft für Ernährung e.V., 2017). 72% (n = 102) reported consuming more than the recommended amount of meat, and 48% (n = 49) of these patients reduced the amount of meat eaten after diagnosis. 64% of the patients (n = 30) who had eaten meat daily prior to the diagnosis of cancer reduced the intake of meat after diagnosis, demonstrating the most pronounced reduction (Table 5).

Changes in physical activity after the diagnosis of cancer 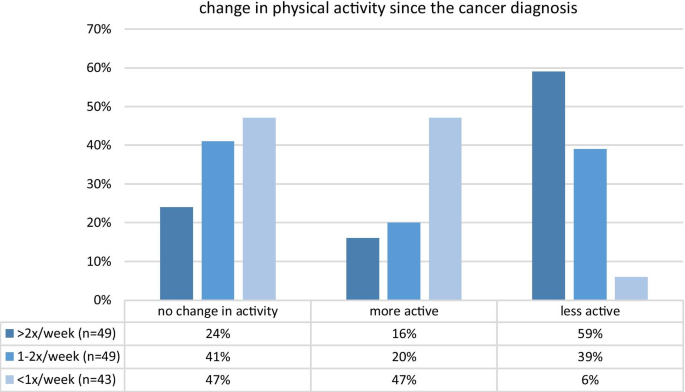 Physical activity before the cancer diagnosis and its modification after diagnosis

The relation of age, BMI, the use of CAM and the level of educational to the exercise modifications is summarized in Table 7. Patients who managed to increase their physical activity after diagnosis were significantly younger (57.4 versus 63.8 years, p = 0.004) and were more often cam-users (p = 0.009). Body-Mass-Index (p = 0.9) and educational level (p = 0.8) showed no relation to a change of physical activity.

This part of the questionnaire focused on the patients’ perception of stress prior to and after the diagnosis of cancer and the underlying reasons for this stress. Potential changes of the level of stress during the course of the disease and potential contributing factors were also analyzed.

Patients could choose between pre-written answers and a free text option in order to assess potential stressors, resulting in 17 response options that were divided into different categories. The patient population evaluated for this study described career (56%, n = 72) as well as family-associated factors (51%, n = 65) as important contributors to an increased stress level. 36% (n = 46) of the patients attributed the increased stress level to poor time management on their own part (“I make too many appointments”, “I create too much stress for myself”). 5% (n = 7) reported prior major life events as the main source of stress, and 5% (n = 5) declined to answer.

Level of stress since the cancer diagnosis

77% (n = 108) of the patients reported a reduction in the stress level since the time of diagnosis, while 69% (n = 74) of these patients claimed to have reduced the level of stress through intentional lifestyle modifications. 14% (n = 20) noticed no changes, and 9% (n = 12) of the patients had a higher stress level after the diagnosis.

Change in stress-level since cancer-diagnosis

Patients were asked to list all reasons for a change in their stress level as free text. All answers were divided into groups and are summarized in Table 9

Table 9 Reasons for decrease/increase in stress after diagnosis

A modification of the professional environment including a reduction in work hours or a leave of absence resulted in a stress reduction in the majority of patients (44%, n = 48). 43% (n = 47) attributed their lower stress level to mental lifestyle changes such as a consciously increased attentiveness to their own needs and wishes as well as the attempt to avoid mental stress due to external stressors. A reduced perception of stress due to separation/ divorce, children moving out or the death of a relative cared for by the patients was detected in 21% (n = 23) of the patients.

Application of methods to enhance relaxation

37% (n = 53) of the patients had been given a recommendation to participate in relaxation techniques.

Supportive company during the disease

Patients were questioned regarding their satisfaction with and deficits in the emotional support received during their illness.

98% (n = 138) stated that they received sufficient emotional support during their disease, particularly from friends and family (95%, n = 133). 74% (n = 103) reported feeling supported by the medical staff. Although there was a high level of satisfaction regarding the emotional support overall, 28% (n = 39) of the patients would have preferred even more intensive support, particularly from physicians (67%, n = 26) but also from family members and friends (44%, n = 17).

MARQUETTE — There’s never a bad time to think about your mental health: Where it stands, how you can improve it, and where to go for help if you need … END_OF_DOCUMENT_TOKEN_TO_BE_REPLACED