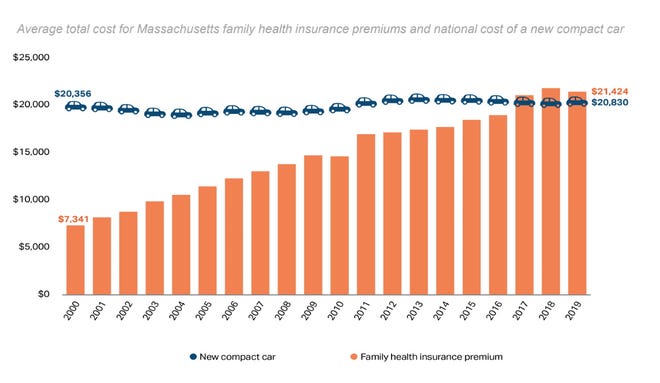 BOSTON — The average total costs for Massachusetts family health insurance premiums roughly tripled from 2000 to 2019, hitting $21,424 and surpassing the national cost for a new compact car.

That statistic was among several pieces of data illustrating the rise in health care costs and burdens on consumers presented Wednesday at a Health Policy Commission meeting, where board members voiced interest adding more teeth to the state’s existing cost-growth accountability measures.

The Health Policy Commission was created under a 2012 law that aimed to rein in health care cost growth. The same law established a benchmark against which annual growth in medical spending is measured.

“My sense is that what’s happened in the past couple of years is that the provider community in particular is saying, ‘Oh, we’re just being monitored, so it’s not such a big deal,'” commission member David Cutler said. “And it’s become a game, like how do you beat the HPC — stay within whatever you need to stay in, but you’d beat the HPC and the state, and that, to me, strikes me as violating the rules of the game and violating the rules that the state implicitly agreed to with the private sector.”

David Auerbach, the HPC’s research director, told the commission that health care spending growth accelerated the past two years and exceeded the 3.1% benchmark in 2018 (3.6%) and 2019 (4.3%).

The state does not face formal consequences for outpacing the benchmark, other than heightened attention to rising costs. Providers and payers deemed to post excessive cost growth can be subject to additional HPC oversight, including a potential requirement that they complete a performance improvement plan.

“I think the whole system did a good job in the early years following the passage of 224 in 2012,” HPC Chair Stuart Altman said, referring to the cost containment law. “The game is now getting tougher and what we’re recommending is that the process also needs to get tougher.”

As the HPC prepares its annual report on health care cost trends, the commission on Wednesday reviewed a slate of 10 proposed policy recommendations aimed at addressing factors driving spending growth.

Much of the HPC’s discussion revolved around the idea of increased accountability.

“I think that comprehensive finding that the current regime is failing to control costs in the commonwealth is a finding we should be very explicit about,” commission member Don Berwick said.

Referencing Cutler’s remarks, Berwick said, “There are no consequences yet for that failure, and unless the Legislature chooses to create consequences, I don’t predict the future will be much better, much different than the past.”

Health and Human Services Secretary Marylou Sudders said she “won’t be quite as cynical as maybe some of my colleagues” and described the 2012 law as “very good legislation when it happened.”

“We’re at a different place and time, and it is the time for us to think about that,” she said.

Lora Pellegrini, president and CEO of the Massachusetts Association of Health Plans, praised the HPC’s set of 10 recommendations after the meeting, describing them as “robust.”

“Persistent increases in prices that doctors, hospitals, and other providers charge, coupled with unwarranted prices for specialty, brand-name and generic drugs will continue to threaten the state’s cost growth benchmark and create affordability challenges for employers and consumers,” she said in a statement. “Many of the recommendations proposed by the HPC strengthen the state’s health care accountability framework, hold all entities responsible for increasing health care costs, and target persistent cost drivers through new interventions designed to bend the cost curve.”

MARQUETTE — There’s never a bad time to think about your mental health: Where it stands, how you can improve it, and where to go for help if you need … END_OF_DOCUMENT_TOKEN_TO_BE_REPLACED