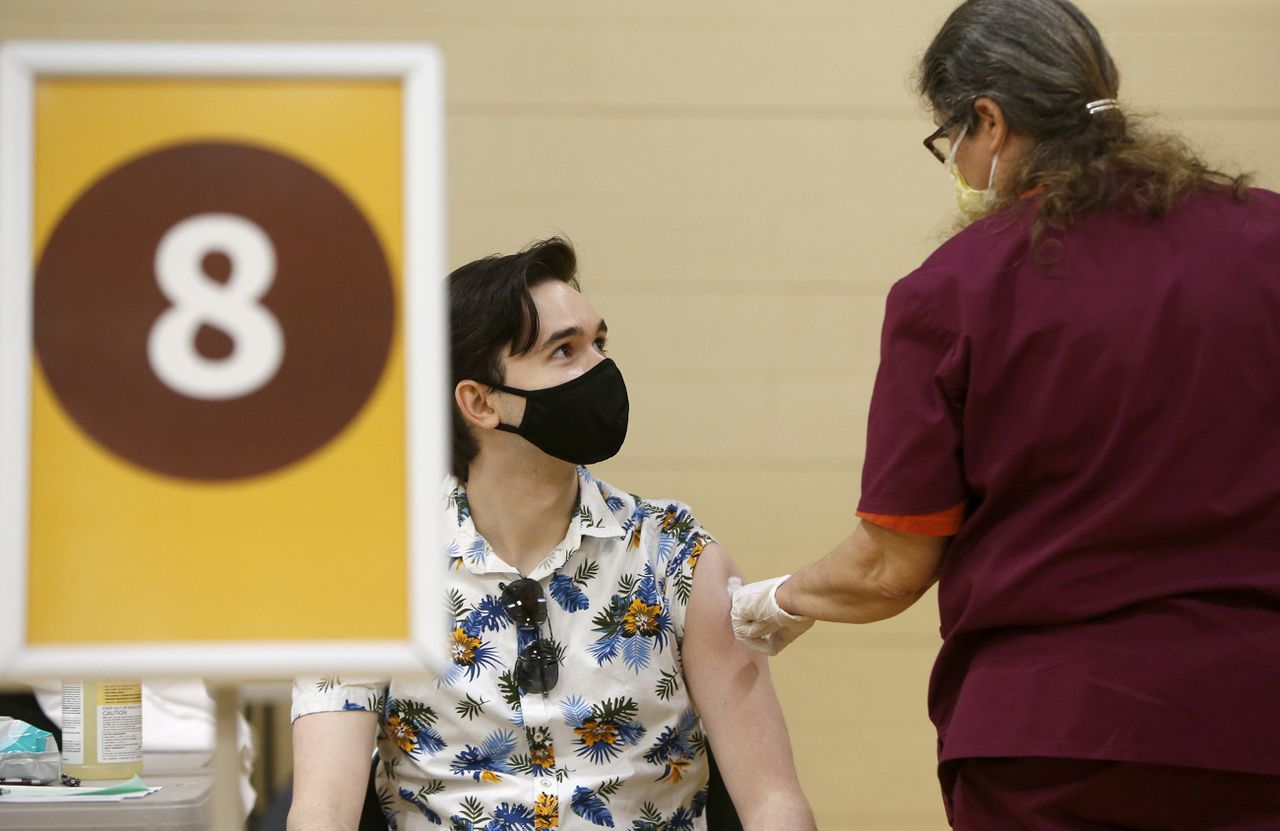 New Jersey on Friday reported another 1,317 confirmed coronavirus cases and an additional 29 confirmed deaths and statewide COVID-19 hospitalizations keep falling as vaccinations continue and the state took a series of new steps to loosen restrictions.

The update comes the same day the state increased outdoor gathering limits from 250 to 500 people, increased capacity limits for outdoor sports and entertainment venues with more than 1,000 seats to 50%, allowed bar seating and buffets to return to bars and restaurants, and increased size limits on indoor catered events, such as weddings and proms, to 50% capacity, with a maximum of 250 people. Dancing is also allowed to resume at those events.

Most of those steps were originally set to happen Monday but were moved up three days.

The state will then eliminate fixed, percentage-based indoor capacity limits on restaurants, stores, personal service, and other businesses on May 19, while also removing all outdoor gathering caps. But indoor masking and social distancing rules will remain, with facilities required to keep groups at least 6 feet apart. That may prevent full capacity at restaurants and other businesses.

More than 3.32 million people have been fully vaccinated in New Jersey as of Thursday — roughly 48% of the state’s 6.9 million adults. That includes out-of-state residents who were vaccinated here. Another 160,084 New Jersey residents have been vaccinated out of state.

The state’s goal is to have 70% of the state’s eligible population — about 4.7 million people — vaccinated by the end of June.

New Jersey’s seven-day average for new confirmed positive COVID-19 tests fell to 1,254, down 31% from a week ago and 65% from a month ago. Friday marked the ninth time in 10 days the state has reported fewer than 2,000 new cases.

There were 1,282 COVID-19 patients hospitalized across the state as of Thursday night. That’s the lowest number since Nov. 4.

“We’re not out of the woods yet, but we’re getting there,” Gov. Phil Murphy said during a morning television interview on “Good Day New York,” using a phrase he often repeats.

The governor argued that New Jersey has been slower to reopen than other states — especially in the South — because it’s the most densely populated state in America and the weather is colder here, keeping more people in doors. (The are conflicting reports and studies over whether higher population density leads to higher infection rates.)

But Murphy stressed that a combination of people following restrictions, the vaccines being rolled out, and the weather getting warmer is “now working in our favor.”

The state’s transmission rate rose to 0.54, up from 0.42 the day before. State Health Commissioner Judith Persichilli warned Monday the recent numbers may be artificially low due to a recent revision to total cases to remove more than 10,000 duplicates. Any number under 1 indicates the outbreak is slowing and each new case is leading to less than one additional case.

New Jersey, an early coronavirus epicenter, has now reported 879,812 confirmed cases out of more than 13.7 million PCR tests in the more than 14 months since the state reported its first case March 4, 2020.

The state of 9.2 million people has reported 25,769 residents have died from complications related to COVID-19 — including 23,129 confirmed deaths and 2,640 fatalities considered probable.

New Jersey has the most coronavirus deaths per capita among American states, largely driven by the early days of the pandemic, when the virus spread rapidly through the region.

There were 1,282 patients hospitalized with confirmed or suspected COVID-19 cases as of Thursday night — 29 fewer than the previous night, according to state data.

That included 292 in critical or intensive care (12 fewer), with 202 on ventilators (three more).

There were 182 COVID-19 patients discharged Thursday.

By comparison, hospitalizations peaked at more than 8,300 patients during the first wave of the pandemic in April and more than 3,800 during the second wave in December.

New Jersey has reported 263 in-school coronavirus outbreaks, which have resulted in 1,157 cases among students, teachers and school staff this academic year, according to state data.

The state defines school outbreaks as cases where contact tracers determined two or more students or school staff caught or transmitted COVID-19 in the classroom or during academic activities at school. Those numbers do not include students or staff believed to have been infected outside school or cases that can’t be confirmed as in-school outbreaks.

There are about 1.4 million public school students and teachers across the state, though teaching methods amid the outbreak have varied, with some schools teaching in-person, some using a hybrid format and others remaining all-remote.

Murphy has said New Jersey’s schools are expected to return to full in-person classes for the next school year.

At least 8,035 of the state’s COVID-19 deaths have been among residents and staff members at nursing homes and other long-term care facilities, according to state data.

There are active outbreaks at 204 facilities, resulting in 2,291 active cases among residents and 3,076 among staffers. Those numbers have slowed as vaccinations continue at the facilities.

As of early Friday afternoon, there have been more than 156.2 million positive COVID-19 tests across the world, according to a running tally by Johns Hopkins University. More than 3.25 million people have died from coronavirus-related complications.

Our journalism needs your support. Please subscribe today to NJ.com

Brent Johnson may be reached at bjohnson@njadvancemedia.com.

Hospitalizations to treat pediatric gun injuries are expensive, and U.S. taxpayers and the poor are bearing the price, according to a new study from … END_OF_DOCUMENT_TOKEN_TO_BE_REPLACED

To the Editor: Vaccination against severe acute respiratory syndrome coronavirus 2 (SARS-CoV-2) prevents infection and reduces the severity of … END_OF_DOCUMENT_TOKEN_TO_BE_REPLACED

BLOOMINGTON – Patches, gum, hypnosis, and sheer willpower are just some of the ways people try to quit tobacco. In honor of Men’s Health Month, help … END_OF_DOCUMENT_TOKEN_TO_BE_REPLACED