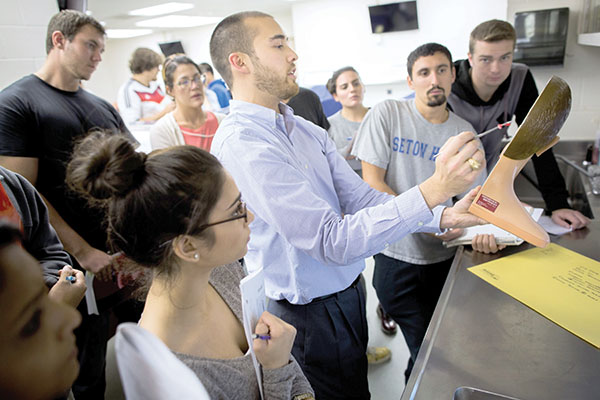 The new name — which New York State approved June 7 — was chosen to “best reflect the transforming scope” of educational opportunities offered at the college and to support the “evolving range of growing” health-care professions, the college said in a June 8 announcement.

Changing the college’s name has “long been discussed,” the school noted. The effort was formally addressed in the NYCC BLUEprint Strategic Plan 2018-2021. In June 2019, the NYCC board of trustees voted unanimously for a name change.

The process was put on hold due to the COVID-19 pandemic, but the state granted NYCC authorization for the new name this June.

The Northeast College of Health Sciences says it “remains committed to its strong foundation” of chiropractic education and plans to continue growing its Doctor of Chiropractic program while developing new academic programs to support in-demand career paths.

“As we continue to prepare our students to be leaders in an ever-more diverse variety of healthcare disciplines, it is fitting that our strong history of academic excellence in chiropractic will remain as our college’s core,” Dr. Michael Mestan, president of Northeast College Health Sciences, said in a release.

In operation for more than 100 years, the school’s original name was Columbia Institute of Chiropractic (CIC), founded by Frank Dean in New York City in 1919.

In the 1970s, CIC became New York Chiropractic College, moving to Long Island and receiving accreditation of its Doctor of Chiropractic program from the Council on Chiropractic Education.

The college moved to its third location in Seneca Falls in 1991, expanding onto a 286-acre campus with space for new facilities. They included a library, athletic center, and residence halls. Another academic expansion in the early 2000s resulted in the addition of graduate degrees in disciplines that included applied clinical nutrition along with human anatomy & physiology instruction.

Northeast College of Health Sciences says it had a “strong” enrollment for its spring 2021 doctor of chiropractic program, seating its largest incoming spring cohort since 2018.

A recent report from the Commission on Independent Colleges and Universities in New York (CICU) indicates Northeast College of Health Sciences contributed an estimated $65 million to the state’s economy in 2019 and was responsible for a total estimated employment of close to 600 jobs, the college said.

MARQUETTE — There’s never a bad time to think about your mental health: Where it stands, how you can improve it, and where to go for help if you need … END_OF_DOCUMENT_TOKEN_TO_BE_REPLACED