“You’re hauling ass right now,” Jolene Van Vugt mouthed as she pointed at the speedometer from the passenger seat of the off-road vehicle I was driving (her own tricked-out two-seater). I noticed the motion, but I couldn’t hear a thing. We were approaching 70 miles per hour on a dirt trail in Cougar Buttes, an off-roading destination in Lucerne Valley, California. She smiled and took out her phone to start recording the ride.

If you don’t know Jolene, you should: She’s the first woman to backflip a full-sized dirt bike, holder of multiple Guinness World Records, and was one of the stars of the stunt show Nitro Circus (which she was recognized for by fans multiple times out on the trails the day we spent together). When it comes to women’s power sports, she’s the real deal. And I was lucky enough to be out riding with her as part of a press trip I was invited on by Polaris to celebrate International Female Ride Day on May 1.

The company wanted me to experience their off-road vehicle, the RZR, and to be honest, I was nervous to accept the invite. I’m not totally inexperienced when it comes to off-roading—I grew up in the rural Midwest, where driving four-wheelers and snow mobiles is a common pastime. But back then, I almost never took the driver’s seat (let alone in the presence of an actual legend like Jolene). I’d reflexively take the passenger or back seat to let whichever guy I was with take the lead. They always made controlling the vehicle seem really intimidating, and I didn’t want them to be bored if I needed to drive cautiously for a while as I got comfortable. Given that power sports are most often touted as a men’s activity, it just seemed like that’s what I was supposed to do.

When I showed up at Happy Trails Rental in the sandy desert to gear up for a day of off-roading, the group of women I was with made me feel at ease. I knew it was going to be a good time when we overheard that a group of men had drawn penises (classic) in the dirt with their vehicles on a dry lakebed off the trail we’d be on, and our amazing photographer, Helen Perez, said we’d have to leave some vulvas behind out there.

Joey Lindahl, a rep for Polaris and a regular rider herself, immediately gave me permission to go slow if I needed, and said I could start in the passenger seat to ease into the experience. Knowing there was no pressure actually made me want to drive. Jolene and the rest of the group started hyping me up, saying they knew I would take to it quickly, and that I could go as fast as I wanted when I was ready. After a year with little outdoor adventure, I was freaking ready. 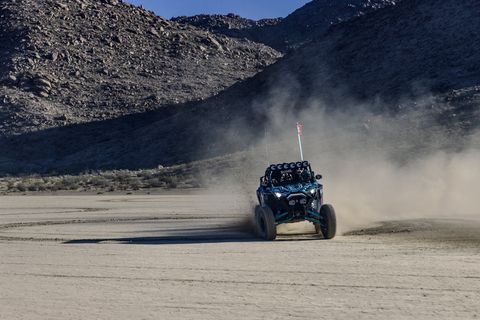 “My heart was racing with the rush of adrenaline, but my hyper-focus gave me an immense sense of calm at the same time.”

Within just a few minutes of driving, I knew I wanted to up the speed, and when I got the chance on a long, straight section of the trail where Jolene and I were leading the group, I pressed my foot down on the gas. My arms felt strong as I flexed to control the wheel and maneuver over the rocks and bumps at top speed. The wind was roaring in my ears, and I could feel gritty sand as I ran my tongue over my teeth. It was dirty and dusty and I loved it. 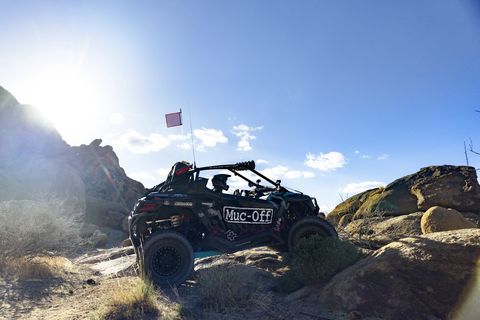 Tearing through the trails was incredibly freeing. My heart was racing with the rush of adrenaline, but my hyper-focus gave me an immense sense of calm at the same time. The deafening wind helped to create tunnel vision on what was ahead of me; I was locked in. I’d been told about this meditative flow state people go into when all sounds are drowned out by the wind during sports like skiing or riding a motorcycle—it’s called wind therapy, and I was definitely experiencing it. It was blissful.

The importance of adrenaline: Motorsports are thought to be therapeutic for people dealing with stress and even PTSD because they can help you feel a sense of control and relearn to associate semi-dangerous activities with fun rather than fear.

The longer I drove, the less interested I was in ever giving up the driver’s seat. Turns out, I had never really been afraid to drive, I just hadn’t been in the right environment to feel like I was allowed to. Being surrounded by badass women gave me the confidence to take control and have fun doing it. Getting a few inaudible hell-yeahs from Jolene while I drove didn’t hurt either. There was zero expectation of performance, just pure excitement and support for exploration. That was the atmosphere I needed to drive in, and it’s no surprise to me that it came from a group of women working (and rock-crawling, and doing donuts!) together.

The trip left me feeling so empowered and capable, and that feeling has stayed with me for weeks after. It inspired me to stop waiting for others to do the things I wanted. I’ve been bolder in my travels, planning a solo hiking trip through Bryce Canyon and Zion National Park for my 30th birthday. I took on Angel’s Landing in Zion, a hike I was admittedly nervous about (it takes you across a long, thin rock ridge with steep drop-offs on either side—not for anyone with even a vague fear of heights). 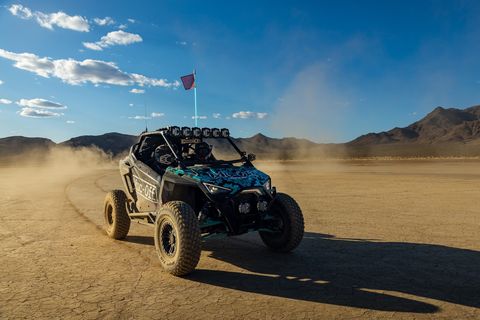 I’ve even been more vulnerable in my relationships, telling someone about my feelings for them first, for the first time. Driving reminded me that I’m allowed to go at whatever speed feels right for me, and it’s up to others to decide if they want to keep up.

Your tear-it-up inspo: The Polaris Empowersports Women’s Riding Council is made up of 12 trailblazing women in the power sports community (give ‘em a follow if you want their badassery to rub off on ya). Ride Wild, She Shreds Mountain Adventures, and Black Girls Ride also offer major motivation to give power sports a try.

The last year has felt off in so many ways, but being able to have control over a powerful machine—to be fully in charge—made me feel like I was coming back into my pre-pandemic body and strength. It gave me a chance to be myself again, to be adventurous, brave, and daring, and you know what? I like that version of myself quite a bit. It was awesome to see her in action again.

Hospitalizations to treat pediatric gun injuries are expensive, and U.S. taxpayers and the poor are bearing the price, according to a new study from … END_OF_DOCUMENT_TOKEN_TO_BE_REPLACED

To the Editor: Vaccination against severe acute respiratory syndrome coronavirus 2 (SARS-CoV-2) prevents infection and reduces the severity of … END_OF_DOCUMENT_TOKEN_TO_BE_REPLACED

BLOOMINGTON – Patches, gum, hypnosis, and sheer willpower are just some of the ways people try to quit tobacco. In honor of Men’s Health Month, help … END_OF_DOCUMENT_TOKEN_TO_BE_REPLACED