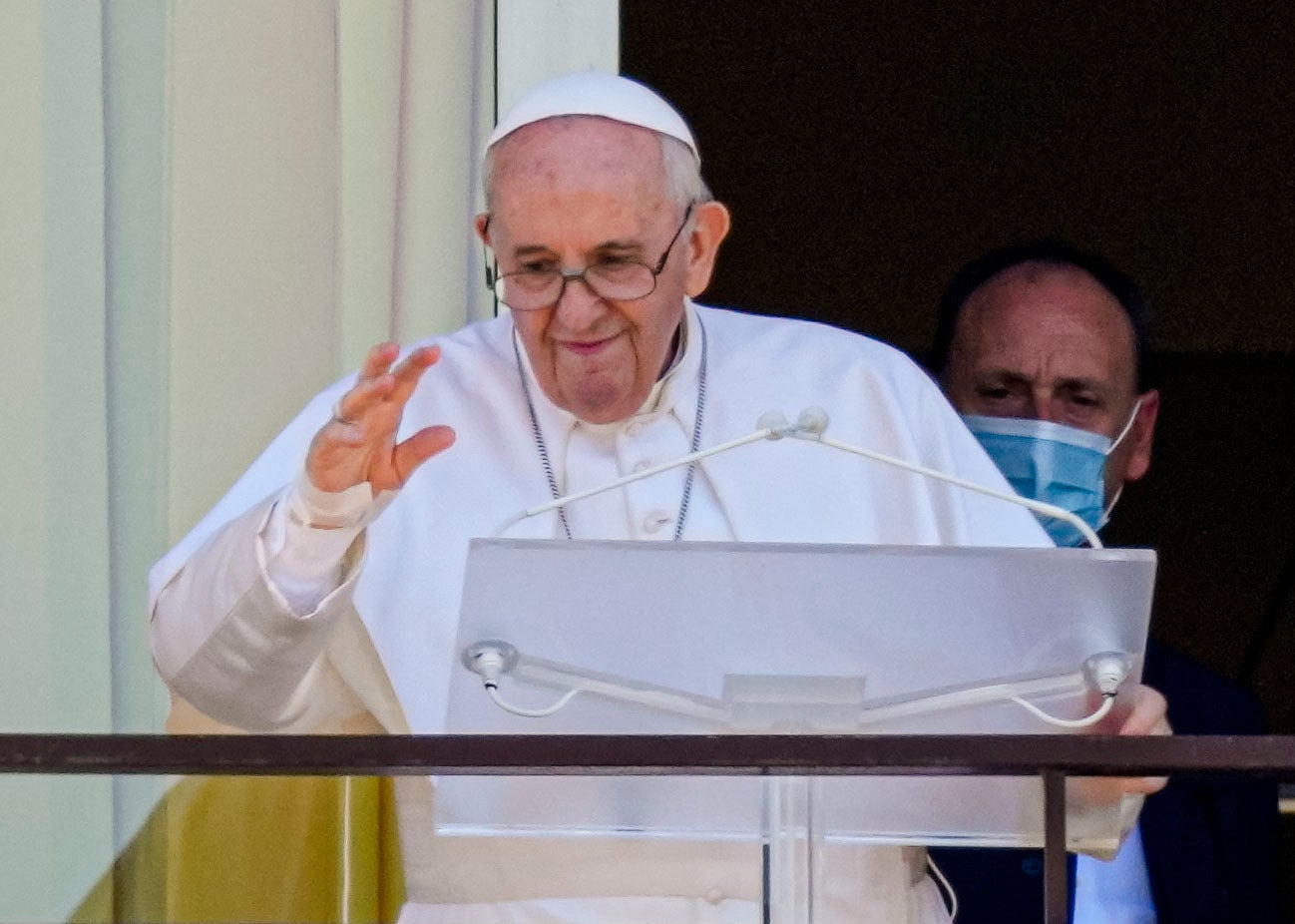 Pope Francis on Sunday made his first public appearance since major intestinal surgery last week, greeting well-wishers as he stood for 10 minutes on a hospital balcony, thanking the many people praying for his recovery and endorsing health care for all as a “previous thing.”

Francis, 84, has been steadily on the mend, according to the Vatican, following his July 4 scheduled surgery to remove a portion of his colon that had narrowed due to inflammation.

The Vatican hasn’t said just when the pope might be discharged. The morning after his surgery, a Holy See spokesperson said his hospital stay was expected to last seven days, “barring complications.”

The pontiff’s voice sounded weak as he began his remarks after stepping onto a balcony outside his special suite at Gemelli Polyclinic at noon local time. But he smiled broadly at those gathered below, including hospital patients well enough to temporarily leave their rooms to cheer for him.

POPE FRANCIS HAD A FEVER 3 DAYS AFTER INTESTINAL SURGERY

Noon is the hour when traditionally he would have appeared from a window at the Vatican overlooking St. Peter’s Square to recite the Angelus, or prayer. Exactly a week earlier in his public remarks, he had given no hint that in a few hours he would enter the hospital for surgery.

“I am happy to be able to keep the Sunday appointment of the Angelus, even here from Gemelli Polyclinic,” Francis said. “I thank everyone. I felt your closeness and the support of your prayers.”

“Thank you from my heart!” exclaimed the pontiff, smiling as he peered over the railing to better see the faithful below.

Standing on the balcony with him were some children who are also hospitalized at Gemelli, a major Catholic teaching hospital on the outskirts of Rome. The crowd below clapped often in encouragement.

Francis underwent three hours of surgery under general anesthesia the evening of July 4, and later that night was described by the Holy See as having responded well.

Reading from prepared remarks, he kept one or both hands on a lectern for support, including when he raised an arm in blessing.

The pope praised the “tenderness” of those who care for the sick, which he said was “like a caress that makes you feel better, eases the pain and picks you up.”

“In these days of hospitalization, I experienced yet again how important a good health service is, accessible to all, as it is in Italy and other countries,” Francis said.

“We mustn’t lose this precious thing,” the pope said. He added that “sometimes it happens in the (Catholic) church that some health care institution, because of poor management, doesn’t go well economically, and the first thought that comes to our mind is to sell it. But the vocation in the church is not to have money, it’s to give service.”

Pope Francis appears on a balcony of the Agostino Gemelli Polyclinic in Rome, Sunday, July 11, 2021, where he is recovering from intestinal surgery, for the traditional Sunday blessing and Angelus prayer. Pope Francis is 84 and had a part of his colon removed a week ago. (AP Photo/Alessandra Tarantino)

SPIDER-MAN SWINGS THROUGH THE VATICAN TO MEET POPE FRANCIS

Francis added his appreciation and encouragement for health care workers, then, referring to the pediatric patients joining him, asked, “Why do children suffer?”

“Why children suffer is a question that touches the heart,” he added, asking his followers to pray for them.

Although he was treated at a private hospital, Italy has a national public health service, and residents can often receive treatment at private facilities with costs reimbursed by the government.

As he usually does on Sundays, Francis spoke of current events and of issues close to his heart. In his balcony remarks, he reiterated his closeness to the people of Haiti as he recalled last week’s assassination of the country’s president and the wounding of the first lady. Francis prayed that Haitians could “start going down a path toward a future of peace and of harmony.”

The world’s environmental fragility has been a major theme of his papacy since it began in 2013. On Sunday, as countless people vacation at the shore, Francis urged people to look after “the health of seas.”

“No plastic in the sea!” the pope pleaded.

Without citing specific issues, he also voiced hope that “Europe may be united in its founding values,” a possible reference to tensions between European Union leaders and member Hungary over LGBTQ rights crackdowns.

Besides his apparent swift recovery, Francis had another reason to smile on Sunday.

Argentina beat Brazil 1-0 in the Copa America soccer final overnight. Francis is a huge soccer fan, and roots for the San Lorenzo squad in his native Buenos Aires.

MARQUETTE — There’s never a bad time to think about your mental health: Where it stands, how you can improve it, and where to go for help if you need … END_OF_DOCUMENT_TOKEN_TO_BE_REPLACED