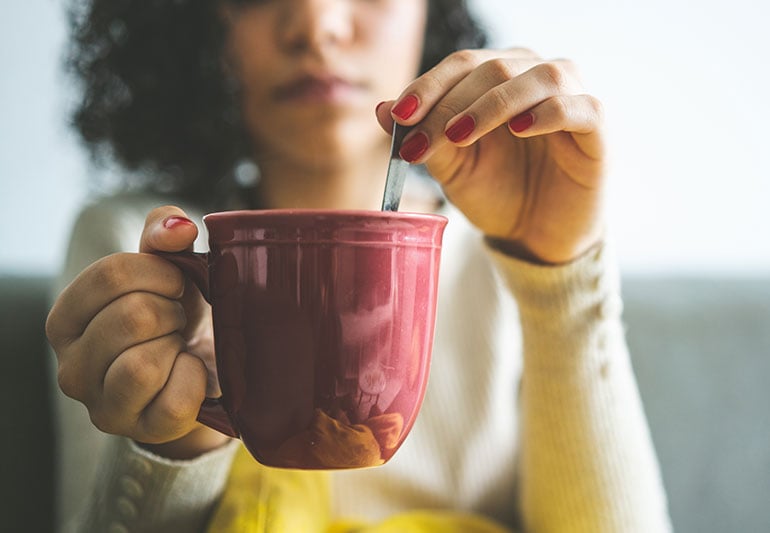 Coffee, tea, soda, energy drinks… caffeine comes in a variety of forms, but they all have one important thing in common: They can be incredibly difficult to quit.

Cleveland Clinic is a non-profit academic medical center. Advertising on our site helps support our mission. We do not endorse non-Cleveland Clinic products or services. Policy

If the best part of waking up is all that caffeine in your cup, it may be time to scale back — but how? Registered dietitian Beth Czerwony, MS, RD, CSOWM, LD, talks about safely scaling back your caffeine consumption.

How much caffeine is too much?

“If you’re doing a cup of coffee every morning, it’s not that big of a deal,” Czerwony says. “But if you’re doing espressos every day throughout the day, that’s more of a problem.”

If you’re pregnant, you’ll want to be even more careful with your caffeine. The American Pregnancy Organization recommends you limit your caffeine intake to 200 milligrams a day (including food with caffeine). And children and adolescents should stay away from caffeine and other stimulants entirely.

The effects of too much caffeine

Although caffeine is generally considered safe, consuming as little as 300 milligrams per day can increase your risk of negative side effects, including:

The more caffeine you consume, the more likely you are to experience negative side effects, including neurologic and cardiac issues and even death.

And even people who are drinking safe amounts of caffeine may be doing so for unhealthy reasons. “Any time you’re trying to manage stress with a substance, that’s something to pause and think about,” Czerwony says.

If you’re trying to quit your caffeine habit, here’s where to start.

Do a caffeine audit

Before you make moves to quit, assess your current caffeine intake: How much are you actually having each day? Figure out how much caffeine is in the beverages you drink each day, then think about where you can cut back.

“So many patients tell me they can’t sleep at night if they drink coffee after 2 p.m.,” Czerwony says, “so this step is really about assessing how caffeine is affecting and interfering with your everyday activities.”

Although caffeine amounts depend on what you’re drinking — and not just what kind of drink but what brand — these estimates can guide you in your assessment:

But it’s not all about what you’re drinking. Caffeine also lurks in foods such as chocolate and coffee-flavored ice cream, as well as in many pre-workout powders, protein drinks, water flavor enhancers, and even medications.

“It’s very important that you read the labels and be observant of what those labels are telling you,” Czerwony advises.

Caffeine withdrawal is exactly what it sounds like — withdrawal from a substance.

“Caffeine is very addictive, so your body is literally going through withdrawal symptoms, as if you were coming off of any other substance,” Czerwony says. “Because it affects the central nervous system, you’re going to get shaky, irritable and headachey.”

To avoid these undesirable side effects, including the agonizing headaches associated with withdrawal, go slowly and don’t expect to give up your caffeine habit overnight.

In fact, quitting caffeine cold turkey can actually further your reliance on it.

Caffeine is a vasodilator, which can help relieve headache pain, making it an ingredient in many over-the-counter pain relievers. Taking a caffeine-laden painkiller for your caffeine withdrawal headache, then, will help your pain but will only continue your caffeine dependence.

“You’re not really helping yourself; you’re just feeding your addiction in a different way,” Czerwony says. “Instead, you want to start weaning yourself down.”

If you’re taking a prescription medication that includes caffeine, speak with your doctor about the possibility of alternatives — but know that they may not be an option. If not, you’ll have to reduce your caffeine intake in other ways.

Another key to beating caffeine withdrawal symptoms is water, water, water. And staying hydrated will energize your body, which may negate the need for caffeine in the first place.

“People often drink caffeine because they can’t seem to stay awake, but dehydration is often the reason they don’t have energy to begin with,” Czerwony says. “If you can get hydrated, you’re going to perk up and not need that caffeine as much.”

Slowly back away from the caffeine

These tips can help you incrementally stop your caffeine intake.

And don’t rush it. “Slowing ramping down is the best way to go about it,” Czerwony advises.

If you delve deeper into your own psychology to identify your consumption habits, you may find that the caffeine itself isn’t as important to you as the feeling of consuming it.

Consider how you can maintain your caffeine routines in caffeine-free ways.

Have faith in yourself

As with any substance, caffeine can be tough to quit — but maybe not as tough as you think, Czerwony says. And it goes a long way.

“If you’re trying to hit the reset button on your health, cutting down on the caffeine while increasing water take is one of the simplest and most beneficial things you can do for yourself.”

MARQUETTE — There’s never a bad time to think about your mental health: Where it stands, how you can improve it, and where to go for help if you need … END_OF_DOCUMENT_TOKEN_TO_BE_REPLACED