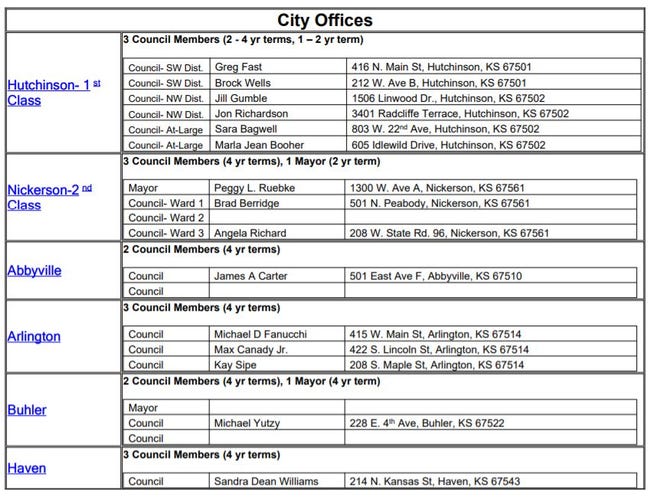 With the presentation of a candidate on Friday morning, races have now been held for the three Hutchinson City Council seats that are in the Nov. 2 vote and a race on Nickerson School Board.

As of Friday, however, there was no other race contested in any other municipal election or in the county school board, nor any race that required August primaries.

In fact, most communities and school boards have not chosen enough candidates to fill all the seats at the polls, with five communities with totally blank blackboards.

Electoral Secretary Jenna Fager said this year she has been unusually slow in making submissions and was unsure of the reason for the lack of candidates.

Residents have until noon on June 1 to apply. The cost is $ 70 and is made at the office of the Reno County Secretary, in the county annex, 125 W. First Ave.

In Hutchinson, the seats in the town halls of the Southwest, Northwest and At-Large are in the election.

The At-Large seat has only a two-year term and incumbent Sara Bagwell, 35, of 803 W. 22nd Ave., is completing her first term in office, currently serving as deputy mayor.

Bagwell, who works as a debt collector at 4th Avenue LLC and owns rental properties, according to her paperwork, ran for re-election.

Also present at At-Large City was Marla Jean Booher, 44, of 604 Idlewild Drive. Booher is director of medical staff services at Hutchinson Regional Medical Center and also works as an online instructor at Hutchinson Community College, according to her LinkedIn profile.

Greg Fast and Brock Wells filed the application in the Southwest District, primarily south of 17th Avenue and west of Plum Street, with a few sculpted blocks.

Fast, 56, 416 N. Main, owns and operates Hutch Lawn Care and CWC Property Rentals LLC. He noted at the presentation that he is chairman of the board of the Boys and Girls Club.

Wells, 38, 212 W. Ave. B, owns Salt City Chiropractic. He opened the 30th Avenue clinic in Hutchinson in 2015. He is also a board member of the Kansas Chiropractic Association, according to its business website.

In Nickerson, two candidates have run for the same position on the school board, while two other seats have no candidates.

Dave Hawthorne, 68, of 7707 N. Monroe St., a Hutchinson Correctional Facility counselor who previously served on Nickerson’s board, lost his seat in 2015.

Other offices to the elections and presentations of these places from 2 p.m. Friday included:

MARQUETTE — There’s never a bad time to think about your mental health: Where it stands, how you can improve it, and where to go for help if you need … END_OF_DOCUMENT_TOKEN_TO_BE_REPLACED