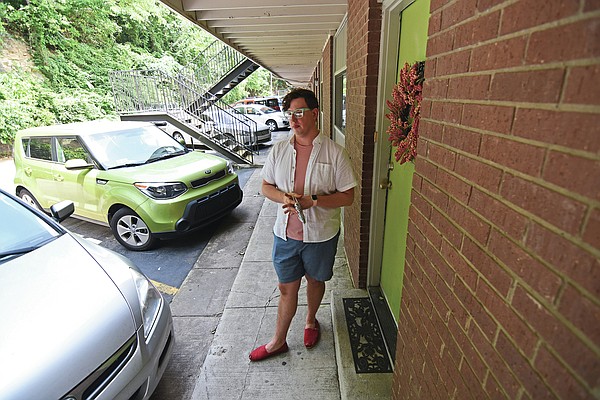 When sewage flowed into the tub, he spent hours scrubbing with cleaning and unclogging products, he said. Still, the toilet couldn’t flush. He couldn’t wash dishes. To shower, he had to walk to his sister’s nearby apartment.

Despite near-daily complaints to apartment managers, the sewage problems went on for at least seven days and still weren’t fixed by late last week, he said. He’s gotten differing answers about what happened and when repairs will be made.

A sanitary sewage system and plumbing that conforms to “applicable building and housing codes in existence at the time of installation” is one of six measures guaranteed to Arkansas tenants who sign leases after Nov. 1, under a new law passed during the state General Assembly’s 2021 session.

Under Act 1052 of 2021, tenants can move out without penalty and get their security deposits returned if landlords don’t provide a sanitary sewage system, among other requirements. Tenants must be current on their rent, and landlords have 30 days to remedy problems.

Burbank said he might have utilized that option, if the new law had been in effect when he signed his lease.

That type of law mandates minimum standards for rental housing. Advocates say Arkansas’ new law needs language that prevents landlords from retaliating against tenants who complain and should include more property standards and more options for tenants whose landlords violate the standards.

• A source of hot and cold running water.

• A source of electricity.

• A source of potable drinking water.

• A functioning roof and building envelope.

• A sanitary sewage system and plumbing.

This wasn’t the first time Burbank has had problems at Arbor Pointe at Hillcrest Apartments. His air conditioning was broken for a month last summer, a problem he says neighbors also complain about. There are also smaller problems. For example, two of four laundry facilities have been out for weeks, he said.

“My first concern is for the privacy and well-being of my residents,” said Don Melzer, regional vice president overseeing Arbor Pointe at Elmington, in an emailed response.

The new Arkansas law excludes rent-to-own leases and instances in which achieving the required standards is prevented by an act of God, a public utility service, or other events such as a pandemic. It also says the landlord isn’t responsible for damage caused by the tenant and doesn’t have to make repairs if the tenant denies the landlord access to the property.

Landlords are also considered in compliance with the law if they provide the tenant with a written form to list any problems with the apartment — and the tenant fails to list problems or doesn’t return the form in two business days.

Lynn Foster, president of Arkansans for Stronger Communities, a nonprofit advocacy group focusing on legislation to require “fit and habitable rental housing,” advised tenants to check the apartment carefully when filling out the form.

“I would say really inspect the premises when you move in,” Foster said. “Even if it’s in July, ask about the heating system and ask to see if it works.”

To notify landlords that the property isn’t in compliance with part of the law, tenants should send a letter by certified mail unless another method is specified in the lease, according to the law.

The act doesn’t include an anti-retaliatory clause, which would bar landlords from evicting or taking other actions against tenants who complain about their housing conditions, said Foster, a former University of Arkansas at Little Rock William H. Bowen School of Law professor who specializes in housing law.

Arkansas’ new rental property law also includes one remedy for tenants who find themselves in housing that doesn’t live up to the new state code: They can move out — though with legal protection now to terminate the lease early without penalty and get a refund on their security deposit.

Warranty of habitability laws in other states typically include more options, such as permitting a tenant to withhold rent to pay for repairs, Foster said.

Moving is costly and often isn’t feasible for tenants with low incomes, said Neil Sealy, an organizer with Arkansas Renters United. And retaliation for complaints is common, he added.

“Retaliation is real, particularly if you are a working class, low-wage tenant, and you can’t go anywhere,” Sealy said.

He added that before signing a lease, tenants should ensure that the landlord views the list of problems with the apartment.

Sealy and other advocates said the law also doesn’t include provisions they would like to see that would require the property to be pest and mold-free or require smoke or carbon monoxide detectors, all measures designed to protect the health and safety of renters. Studies have shown that mold has adverse effects on respiratory health.

Bruno Showers, a senior policy analyst with Arkansas Advocates for Children and Families, said many of those issues could have been resolved with language requiring protections for “tenant health and safety.”

“We’re talking about mold, pests, cockroaches and rats, that kind of thing,” Showers said. “Obviously from our perspective, those have big impacts on health and especially children’s health.”

Legislators who backed Act 1052 say they’re aware of the criticisms, but the bill was the best possible compromise between tenant and landlord groups.

“I think it was a good start and put something on the books that we’ve never had before, which was that habitability components,” Dismang said.

Both Dismang and Hawks said habitability is an issue they’ll likely revisit.

Rep. Jimmy Gazaway, R-Paragould, sponsored a warranty of habitability bill during the session that included more requirements. It passed the House Insurance & Commerce Committee, but died shortly after. He voted for Act 1052 because “something is better than nothing,” although he said the new law “lacks meaningful protections” for renters.

Two of the most important additions to the bill would have been smoke and carbon monoxide detectors, Gazaway said.

“I shudder to think of the number of Arkansans that may die between this legislative session and the next because they wouldn’t go so far as to put smoke detectors and Co2 detectors in minimum standards for habitability,” he said.

Habitability standards have been debated in the legislature since at least 2005. Hawks said his and Dismang’s bill was the best way to gain ground on the issue.

“I understand that some folks say that it may not go far enough, but it’s farther than we’ve ever gone before and it’s actually a historical document for the state of Arkansas,” Hawks said. “We’re gaining ground. While it may not be everything for everybody, it’s something for someone who needs it.”

Hawks added that an important component of the legislation is removal of a requirement for tenants to pay the amount of rent they owe into the court registry before they get a hearing in lawsuits under the state’s unlawful detainer statute. The law is the most commonly used type of eviction in Arkansas.

“This is going to make sure that they’re not paying until the case is heard,” Hawks said.

Showers added that he views the requirement’s removal as the most important change for tenants to know about the new legislation.

“I don’t think this is going to have an impact on the vast majority of landlords in the state,” Dismang said. “But there are outliers, and hopefully this will apply and provide some remedies.”

Burbank’s experience at Arbor Pointe has changed the way he looks for apartments. He’s planning to move out of Arkansas soon; he just finished his first year teaching high school theater and wants to live somewhere with more options for acting and directing.

“This one, they had a good facade because when we did the walk-through and the tour and saw it with them beforehand, everything seemed like it was going to be so easy with everything that they promised,” he said.

The Wisconsin Women’s Health Foundation is a nonprofit dedicated to improving the health of women in Wisconsin. The organization trains nurses and … END_OF_DOCUMENT_TOKEN_TO_BE_REPLACED

Aviva has highlighted six ways employers can support men’s health in the workplace, as part of this year’s International Men’s Health Week (14-20 … END_OF_DOCUMENT_TOKEN_TO_BE_REPLACED

Need to know Basic health insurance policies are promoted as the best for tax, but they're so limited you’ll hardly ever be able to … END_OF_DOCUMENT_TOKEN_TO_BE_REPLACED