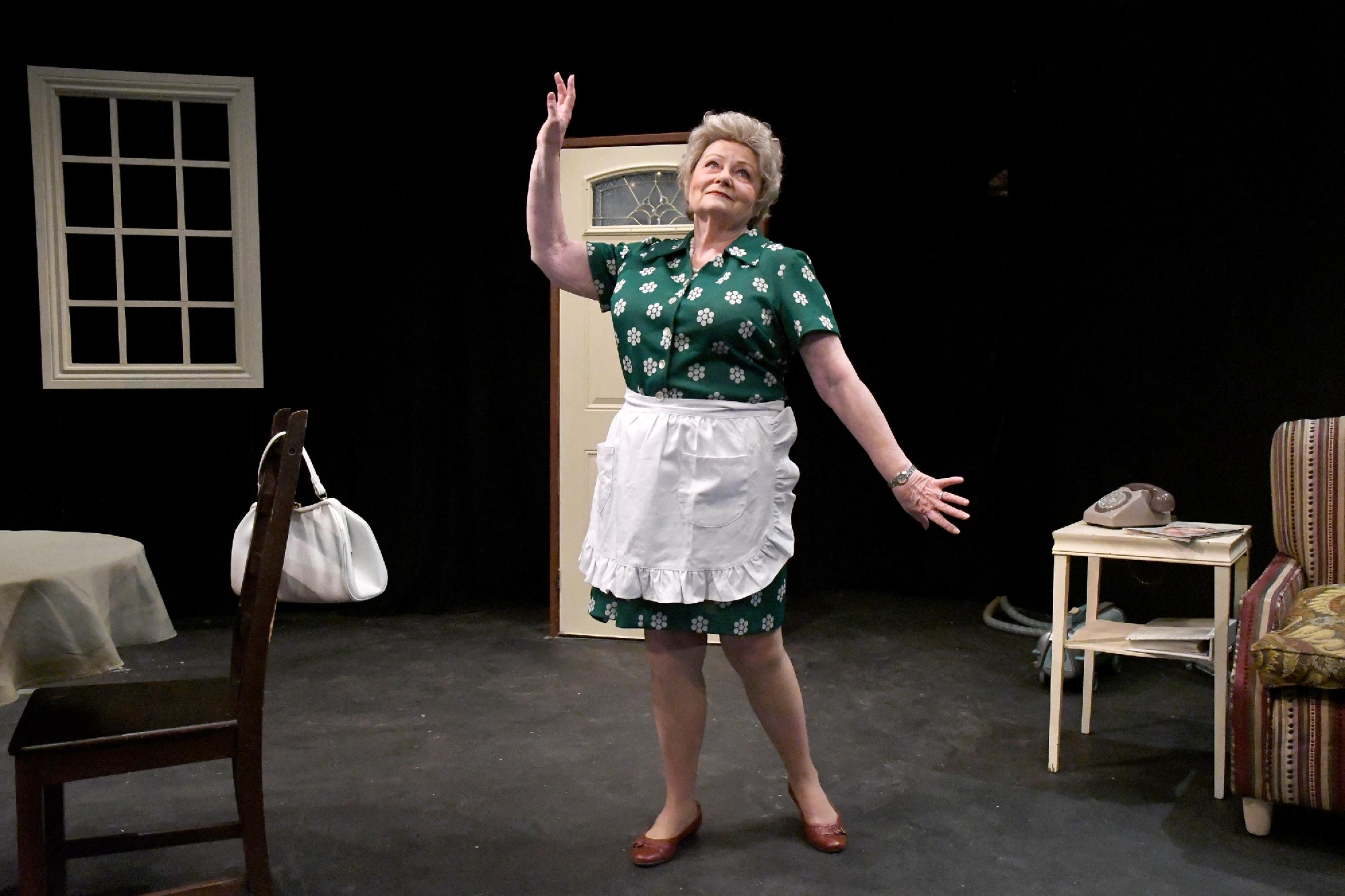 LATHAM — The title of this comedic morsel works two ways: it refers, of course, to the amusing newspaper columns that Erma Bombeck wrote, beginning in the 1950s and continuing until her death in 1996; and it also is a phrase that means “mental perplexity about a situation.” Bombeck’s fertile imagination took the confusing stuff of everyday life as a wife and mother of three and found the humor in it all.

I call it a morsel, and running an uninterrupted 70 minutes, this one-woman stage adaptation by Allison and Margaret Engel of Bombeck funny one-liners and sweet meditations is just that — an enjoyable and brief outing in the company of a clever writer.

In the course of this monologue, we learn about Bombeck’s Midwestern beginnings as Erma Fiste; her early interest in writing, journalism in particular; the happy marriage to Bill Bombeck and the arrivals of her children; health concerns, including cancer and kidney problems; and her commitment to women’s issues, especially the Equal Rights Amendment.

It falls to Terri Storti as Erma, aided by director Brian Clemente, to reveal these facts and convey the play’s emotions as seamlessly as possible, and the two of them have created a finely paced and engaging one-sided conversation. To be a play, the text has to be accompanied by action, and in this case, the action is not just to keep us attentive but, critically, to illustrate the situation of a female creative artist: everything Erma does (in white pumps, a smart green dress, and pearls, by the way) is a domestic task (ironing and folding clothes, speaking to unseen children, vacuuming, putting things away). Each chore is accompanied by imaginative stream-of-consciousness. In other words, she does one thing, but she is thinking something else — like all of the housewives and moms she was writing for? (Of course, one is reminded of Woolf’s “A Room of One’s Own,” and, indeed, Bombeck mentions that famous essay.)

The script gives us plenty of witty observations: “The only plus about exercise is hearing heavy breathing again”; “I speak fluent child”; “If you can laugh at it, you can live with it.” But it also contains tender moments of wisdom, which Storti mines superbly. I was deeply touched when Bombeck answers the question about who her favorite child is with lines only a sensitive parent could have come up with.

Technically, the production is ship-shape. The set and lighting are by William E. Fritz; the evocative sound design is by Alex Dietz-Kest; and Jeffrey P. Hocking is the stage manager.

Producing artistic director Carol Max has taken great precautions to make the return to live theater safe, and her curtain speech at Saturday’s matinee amusingly suggested how challenging her job is in these sad and strange times.

Bombeck was a mid-20th-century popular pleasure. The play opens with her coming into the living room — our living rooms — and poignantly concludes with her leaving, with always one more thing to say. In real life her exit did come when she had more to say: she died at 69. But what she did manage to tell us was worth a listen.

More from The Daily Gazette:

MARQUETTE — There’s never a bad time to think about your mental health: Where it stands, how you can improve it, and where to go for help if you need … END_OF_DOCUMENT_TOKEN_TO_BE_REPLACED