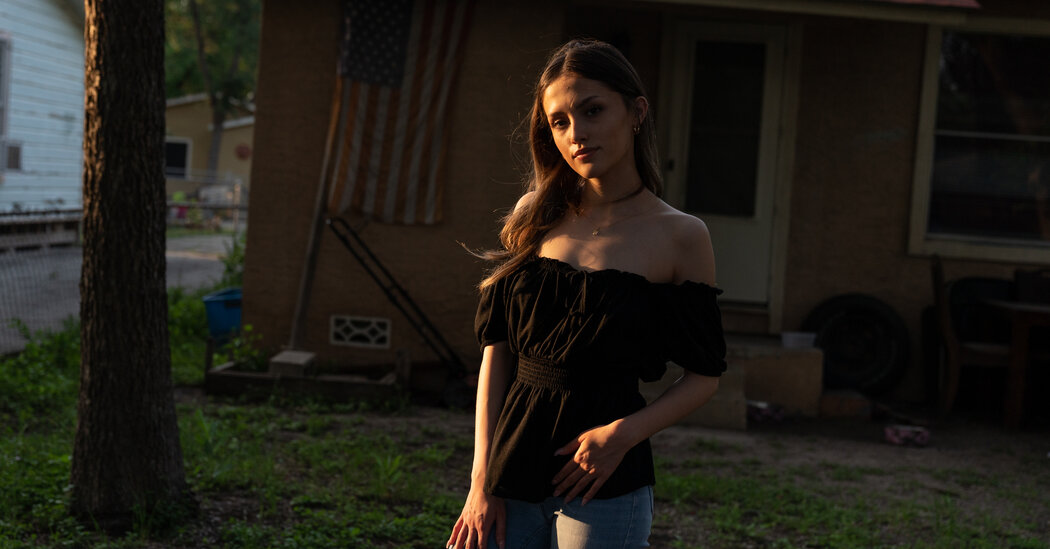 Pauline Rojas’s high school in San Antonio is open. But like many of her classmates, she has not returned, and has little interest in doing so.

During the coronavirus pandemic, she started working 20 to 40 hours per week at Raising Cane’s, a fast-food restaurant, and has used the money to help pay her family’s internet bill, buy clothes and save for a car.

Ms. Rojas, 18, has no doubt that a year of online school, squeezed between work shifts that end at midnight, has affected her learning. Still, she has embraced her new role as a breadwinner, sharing responsibilities with her mother who works at a hardware store.

“I wanted to take the stress off my mom,” she said. “I’m no longer a kid. I’m capable of having a job, holding a job and making my own money.”

Only a small slice of American schools remain fully closed: 12 percent of elementary and middle schools, according to a federal survey, as well as a minority of high schools. But the percentage of students learning fully remotely is much greater: more than a third of fourth and eighth graders, and an even larger group of high school students. A majority of Black, Hispanic and Asian-American students remain out of school.

These disparities have put district leaders and policymakers in a tough position as they end this school year and plan for the next one. Even though the pandemic appears to be coming under control in the United States as vaccinations continue, many superintendents say fear of the coronavirus itself is no longer the primary reason their students are opting out. Nor are many families expressing a strong preference for remote learning.

Rather, for every child and parent who has leaped at the opportunity to return to the classroom, others changed their lives over the past year in ways that make going back to school difficult. The consequences are likely to reverberate through the education system for years, especially if states and districts continue to give students the choice to attend school remotely.

Teenagers from low-income families have taken on heavy loads of paid work, especially because so many parents lost jobs. Parents made new child care arrangements to get through the long months of school closures and part-time hours, and are now loath to disrupt established routines. Some families do not know that local public schools have reopened, because of language barriers or lack of effective communication from districts.

Experts have coined the term “school hesitancy” to describe the remarkably durable resistance to a return to traditional learning. Some wonder whether the pandemic has simply upended people’s choices about how to live, with the location of schooling — like the location of office work — now up for grabs. But others see the phenomenon as a social and educational crisis for children that must be combated — a challenge akin to vaccine hesitancy.

“There are so many stories, and they are all stories that break your heart,” said Pedro Martinez, the San Antonio schools superintendent, who said it was most challenging to draw teenagers back to classrooms in his overwhelmingly Hispanic, low-income district. Half of high school students are eligible to return to school five days a week, but only 30 percent have opted in. Concerned about flagging grades and the risk of students dropping out, he plans to greatly restrict access to remote learning next school year.

“I don’t want to keep opening up this Pandora’s box,” he said.

In March, half of Black and Hispanic children, and two-thirds of Asian-American children, were enrolled in remote school, compared with 20 percent of white students, according to the latest federal data. While most district leaders and policymakers believe that the classroom is the best place for children and teenagers to learn, many are hesitant to apply pressure to families who have lived through a traumatic year.

An added complication is continued opposition to full-time, in-person learning from some teachers and district officials, with unions arguing that widespread vaccination of educators, and soon teenagers as well, does not eliminate the need for physical distancing. The Centers for Disease Control and Prevention continues to advise three to six feet of distancing in schools. In that context, students who opt out create the space necessary to serve students who prefer to be in person.

At the same time, remote learning is a staffing challenge for districts. In some, like San Antonio, it is common practice for teachers to instruct remote and in-person students simultaneously, through a live video stream from the classroom to students at home. In others, such as New York City, unions have resisted having teachers do both at once, making it difficult to fully staff classes.

And in New York and several other cities where many teachers have received medical accommodations to work from home, some students inside classrooms have been asked to log into remote learning platforms to interact with teachers in other locations, leading families to conclude that there is little benefit to being inside the building, and driving opt-out rates higher. Districts that offer remote learning next school year could contract the work out to stand-alone online schools, freeing their own teachers to return to buildings. But for many months, some education and children’s health experts have warned about the social and academic consequences of extended remote learning.

Professor Kogan’s research has found that parents are more likely to feel hesitant about in-person learning if their children’s schools were closed for a longer period, which was most likely to be the case in the liberal-leaning urban districts that serve large numbers of nonwhite students. The hesitancy was caused less by fear of the coronavirus than by messaging from school districts about whether in-person learning was safe and desirable, Professor Kogan found.

Many governors, mayors, school boards and superintendents are still debating whether families should continue to have the option of virtual schooling this fall. But one February survey of educators found that 68 percent expected their systems to offer an array of remote learning options even after the pandemic ends.

As long as the option for remote school remains, direct outreach to families is the best way to lure students back to traditional classrooms, educators say.

In the Indianapolis Public Schools, 20 percent of students remain in fully remote learning, a smaller percentage than in many other urban districts. The district made 1,000 home visits over two days in April to check on children who had been chronically absent during the pandemic, sometimes encouraging them to return to in-person learning.

Antoinette Austin, the district’s social services coordinator, visited one boy who was living with an aunt. She did not speak English and did not know her nephew’s school had reopened. Several other families needed help arranging transportation to get their children to school, Ms. Austin said.

The latest on how the pandemic is reshaping education.

Hybrid school schedules have also made it difficult for many families to commit to in-person learning during the pandemic.

That was the case for Angela Kersey, who returned her 13-year-old son, Jonathon, to his Indianapolis school when it initially reopened this winter. But she withdrew him when she found that her work schedule in housing maintenance could not accommodate the upheaval caused by the school’s half-time hours and closures when virus cases were discovered.

Speaking over Zoom, Ms. Kersey rubbed her temples as she recalled trying to keep her son, who has attention deficit hyperactivity disorder, engaged with online learning. There was one especially difficult period when the two were sharing a single bedroom and living with roommates. At times, the strain of acting as both a parent and a teacher caused so many fights that Ms. Kersey gave up on virtual learning.

“I had to just surrender,” she said.

Unwilling to return to that routine, she enrolled Jonathon in a five-day-per-week learning center at Brookside Community Church, where college students supervise remote school and sports for 14 children.

Jonathon’s regular school is now open five days per week, but Ms. Kersey said she did not want to disrupt her son’s new routine.

In New Orleans, Frederick A. Douglass High School, part of the national KIPP charter school network, first reopened for in-person learning in October, and now offers students four days per week in classrooms. Even so, wooing students back has been a major challenge. In the fall, 50 to 75 of the school’s 600 students were showing up each day; more recently, about half were. Ninety percent of the school’s students are Black and come from low-income families.

Towana Pierre-Floyd, the principal, has taken several steps to convince families to return. Maintaining upbeat on-campus events, like homecoming elections, showed students attending virtually what they were missing out on in the building, she said. In addition, the school began issuing weekly progress reports to families with students’ grades and assessment scores, a practice Ms. Pierre-Floyd said she will continue even after the pandemic ends.

Because most students were not as successful virtually, the reports left families “hungry for an option to be with teachers,” she said.

Ms. Pierre-Floyd envisions her entire student body back in person next school year, but she knows it will require a big adjustment. Some teenagers are providing child care for younger siblings. Parents who lost jobs in the city’s struggling tourism sector sometimes needed their children to work.

She plans to hire an attendance coordinator and expand an early-college program that allows high school students to work toward a medical assistant certification or develop carpentry skills. She said she hopes those options will show parents the economic utility of returning their children to the building.

“A lot of families have built life structures around their Covid reality,” she said. Now, the challenge is to “come out of crisis mode and let’s think about the future again.”

MARQUETTE — There’s never a bad time to think about your mental health: Where it stands, how you can improve it, and where to go for help if you need … END_OF_DOCUMENT_TOKEN_TO_BE_REPLACED