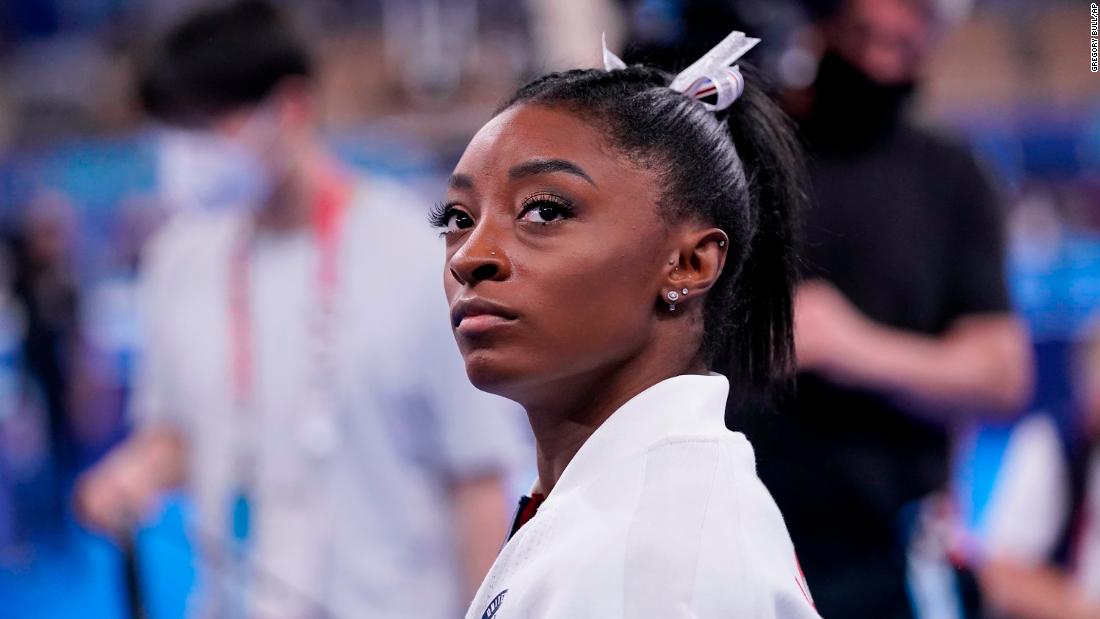 Her withdrawal comes after the 24-year-old — one of the greatest gymnasts of all time — stepped away from a dramatic team competition on Tuesday, citing mental heath concerns as she attempts to protect “her body and mind.”

USA Gymnastics said it supported her decision “wholeheartedly,” adding in its statement that Biles would be assessed every day.

“After further medical evaluation, Simone Biles has withdrawn from the final individual all-around competition at the Tokyo Olympic Games, in order to focus on her mental health,” read a statement on the USA Gymnastics’ Twitter account.

“Simone will continue to be evaluated daily to determine whether or not to participate in next week’s individual event finals. Jade Carey, who had the ninth highest score in qualifications, will participate in her place in the all-around.

“We wholeheartedly support Simone’s decision and applaud her bravery in prioritizing her well-being. Her courage shows, yet again, why she is a role model for so many.”

Biles had been one of the favorites to win gold in Thursday’s final, having won every individual all-around competition that she has entered since 2013. After Sunday’s qualifying in Tokyo, Biles had finished first with a score of 57.731.

She still has the opportunity to compete in other individual events during the remainder of the Games, having qualified for individual finals in each apparatus: vault, uneven bars, balance beam and floor exercise.

On Tuesday, Biles said that she was going to take the rest of the Olympics “one day at a time” as she looks to add to her haul of four gold medals won at the 2016 Rio Olympics.

READ: Simone Biles doesn’t need more medals. She returned to the Olympics for something much more impactfulREAD: ‘I have to focus on my mental health,’ says Simone Biles

‘I have to focus on my mental health’

The eyes of the world were on Biles this week as she aimed to add to her remarkable legacy.

However, her emotional interview after Tuesday’s team final put the issue of mental health front and center of the Tokyo 2020 Olympics.

Earlier that day, Naomi Osaka, who has also talked openly about her own mental health struggles, was knocked out of the women’s Olympic tennis tournament.

“Whenever you get in a high stress situation, you kind of freak out,” Biles told reporters on Tuesday. “I have to focus on my mental health and not jeopardize my health and well-being.

“It just sucks when you’re fighting with your own head.”

MARQUETTE — There’s never a bad time to think about your mental health: Where it stands, how you can improve it, and where to go for help if you need … END_OF_DOCUMENT_TOKEN_TO_BE_REPLACED