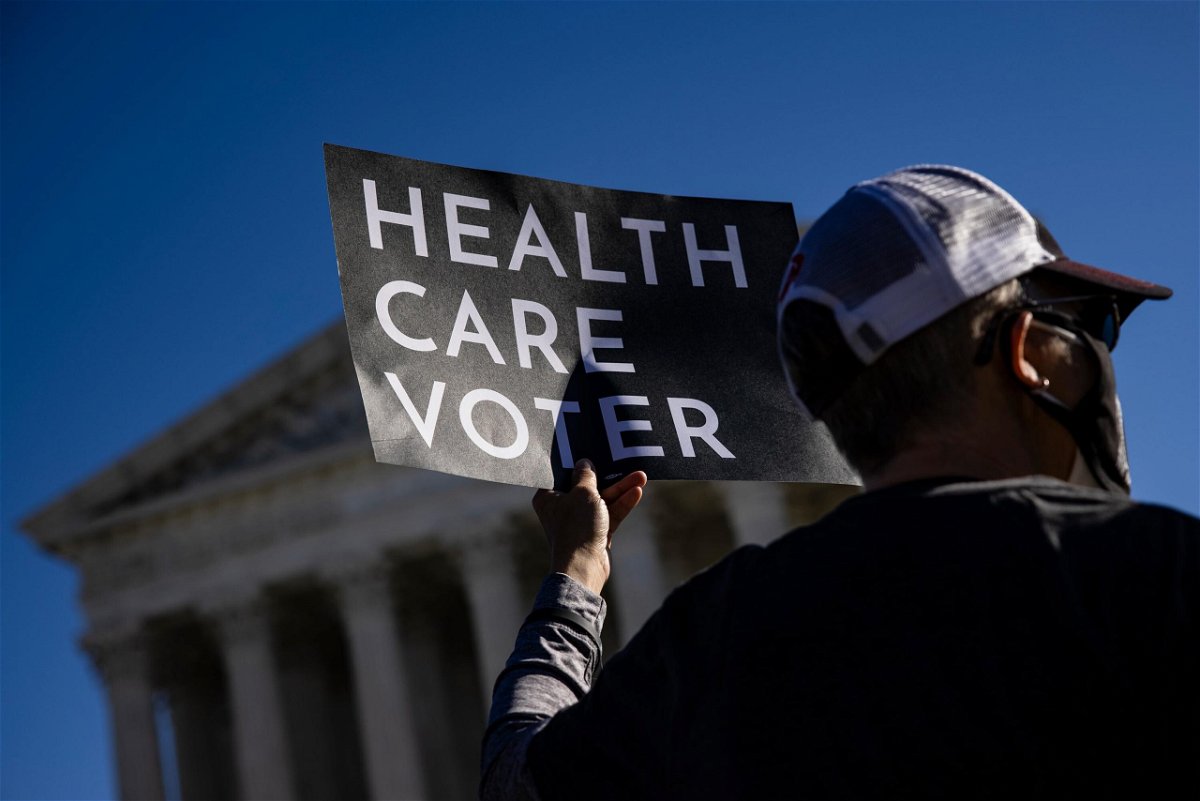 The Supreme Court dismissed a challenge to the Affordable Care Act on Thursday in a decision that will leave the law intact and save health care coverage for millions of Americans. The justices turned away a challenge from Republican-led states and the former Trump administration, which urged the justices to block the entire law.

The justices said that the challengers of the 2010 law did not have the legal right to bring the case.

“With millions of people relying on the Affordable Care Act for coverage, it remains, as ever, a BFD. And it’s here to stay,” President Joe Biden tweeted Thursday, a reference to him being caught on a hot mic telling President Barack Obama in 2010 the law is a “big f–king deal.”

The justices noted that there is no harm to opponents from the provisions that they are challenging because Congress has reduced the penalty for failing to buy health insurance to zero.

“For these reasons, we conclude that the plaintiffs in this suit failed to show a concrete, particularized injury fairly traceable to the defendants’ conduct in enforcing the specific statutory provision they attack as unconstitutional,” Breyer wrote. “They have failed to show that they have standing to attack as unconstitutional the Act’s minimum essential coverage provision.”

The Department of Health and Human Services released a report earlier this month that shows a record 31 million Americans have health coverage through the Affordable Care Act, including 11.3 million people enrolled in the Obamacare exchanges as of February and 14.8 million newly-eligible, low-income people enrolled in Medicaid expansion as of December.

In addition, another 1.2 million Americans have selected policies for 2021 during a special enrollment period that Biden launched in mid-February to expand coverage to the uninsured. It runs until mid-August.

Texas Attorney General Ken Paxton, who led the legal challenge against the law and has spearheaded Republican efforts to undo Obama-era policies through the courts, vowed to continue fighting the law in a Twitter post on Thursday.

“If the government is allowed to mislead its citizens, pass a massive government takeover of healthcare, and yet still survive after Supreme Court review, this spells doom for the principles of Federalism and limited government,” Paxton tweeted.

“Today’s ruling is, indeed, another reprieve for the Affordable Care Act — one that rests on the extent to which the provisions its critics say are objectionable are no longer enforceable against them,” said Steve Vladeck, CNN Supreme Court analyst and professor at the University of Texas Law.

The ruling means that the justices won’t rule on the merits of the lawsuit, but allows the law to stand.

“By holding that these individual plaintiffs and states lacked ‘standing’ to sue, the justices avoided deciding whether the ACA as revised is constitutional — but also made it much harder for anyone to get that issue into the courts going forward,” Vladeck said. “In essence, they sucked the oxygen out of the ACA’s continuing constitutional fire.”

Obama said the high court’s ruling reaffirms that the law “is here to stay.”

“The principle of universal coverage has been established, and 31 million people now have access to care through the law we passed — with millions more who can no longer be denied coverage or charged more because of a preexisting condition,” the former president said in a statement Thursday.

Dr. Ezekiel Emanuel, who helped shape the law as a White House adviser under Obama, echoed the 44th President on Thursday the high court made it clear that the ACA is the law of the land.

“It’s going to stay the law of the land. We’re not repealing it and now we should get on to doing additional things to help improve the health care system,” Emanuel told CNN’s Poppy Harlow on “Newsroom.”

“I think the issue is, let’s stop with the debate of can we get people covered through the Affordable Care Act? Will the exchanges stay? Will the Medicaid expansion stay? And let’s talk about the real issues of improving the health of the population…,” he added. “They made clear, stop annoying us. This is a recurring fly. We’re not going to deal with it.”

In his dissent, Alito called out the various times the Supreme Court has now ruled on the law and found ways to keep it in place.

“No one can fail to be impressed by the lengths to which this Court has been willing to go to defend the ACA against all threats. A penalty is a tax. The United States is a State. And 18 States who bear costly burdens under the ACA cannot even get a foot in the door to raise a constitutional challenge,” the veteran conservative justice added.

“So a tax that does not tax is allowed to stand and support one of the biggest Government programs in our Nation’s history. Fans of judicial inventiveness will applaud once again,” he added. “But I must respectfully dissent.”

The case marked the third time the court heard a significant challenge to the law, although the stakes were heightened given the implications of Covid-19, the catastrophic deaths and the current burdens facing the health care industry. Texas and other Republican-led states, with the support of the Trump administration, challenged the law which was defended by California and other Democratic-led states plus the House of Representatives.

In 2012, Roberts cast the key vote in a 5-4 decision that stunned Republicans, holding that the law’s individual coverage mandate was valid under Congress’ taxing power. By 2017, the Republican-led Congress cut the tax penalty for those who lacked insurance to zero as part of the year-end tax overhaul.

The Republican-led states, supported by the Trump administration, sued, arguing that since the mandate was no longer tied to a specific tax penalty, it had lost its legal underpinning. They also argued that because the individual mandate was intertwined with a multitude of other provisions, the entire law should fall, including protections for people with preexisting conditions.

In December 2019, a federal appeals court held that the individual mandate was unconstitutional. But critically, the court punted on whether the rest of the massive law — even provisions unrelated to the mandate — could remain on the books.

In court, Texas Solicitor General Kyle D. Hawkins said the 2017 change made the individual mandate unconstitutional. “It is a naked command to purchase health insurance, and, as such, it falls outside Congress’ enumerated powers,” he said. “The proper course is to take Congress at its word and declare the mandate unconstitutional and inseverable from the remainder of the ACA,” he said.

During his term, former President Donald Trump repeatedly said he would come up with an alternative but never issued any substantive details.

Supporters of the Affordable Care Act thought the court should uphold the entire law but conceded the justices could strike down the mandate but allow the rest of the law to stand.

“Congress made a single surgical change,” California Solicitor General Michael Mongan told the justices. He stressed that the rest of the law should remain in effect if the mandate is struck “because that’s the very framework Congress itself already created.”

Former US Solicitor General Donald Verrilli, arguing on behalf of the House of Representatives, also argued that the two individuals and Republican-led states did not have the legal injury necessary to bring the challenge. He said that once Congress has brought the penalty down to zero, those who refused to buy health insurance would no longer be faced with a tax for failing to do so.

“There is just no way that Congress would have preferred an outcome that throws 23 million people off their insurance, ends protections for people with preexisting conditions and creates chaos in the health care sector,” he said.

Twice in the previous court term, the justices relied on severability doctrine to save laws after finding individual provisions unconstitutional. In one case, Roberts wrote, “We think it clear that Congress would prefer that we use a scalpel rather than a bulldozer.”

This story has been updated to include additional background information and reaction.

MARQUETTE — There’s never a bad time to think about your mental health: Where it stands, how you can improve it, and where to go for help if you need … END_OF_DOCUMENT_TOKEN_TO_BE_REPLACED