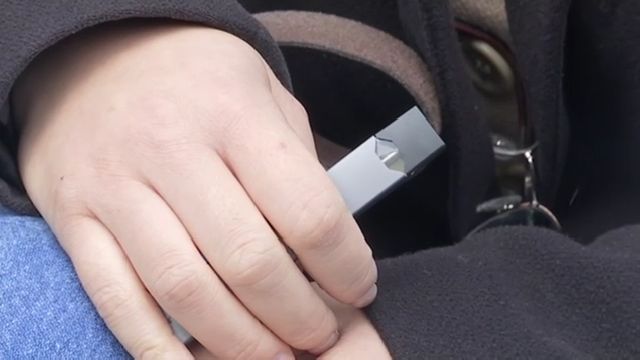 CHARLOTTE, N.C. — According to the CDC, more than 500,000 middle schoolers across the country use e-cigarettes.

What You Need to Know

High school senior Alexa Ziegler is a teen advocate with Teen Connection’s Drug-free Coalition. She says she’s seen the JUUL advertising, and she believes it’s directed toward kids her age.

“It’s definitely become a really prevalent thing for teens to use it. I think a lot of that comes from the idea that it doesn’t look very scary. It looks very sleek,” Ziegler said.

JUUL reached a 40 million settlement with the state of North Carolina in July to prevent any misleading advertisements, based on research showing their target audience was youth.

JUUL recently reached a $40 million settlement with the state of North Carolina–after being accused of marketing to youth.

According to studies by the CDC, more than 3 million high schoolers and more than 500,000 middle schoolers say they’ve used e-cigarettes.

“We’re going back in time to this new electronic vaping that’s equivalent to cigarette smoke in some fashion,” Ziegler said.

While early marketing advertised Juul as an alternative for cigarettes, studies by the CDC show one Juul pod is actually equivalent to 20 cigarettes, or one pack.

Ziegler says by providing her peers with this information through Teen Health Connection, she hopes she can deter them from using vaping products and drugs. She says through billboards, marketing, programs and fundraising, teens who are a part of the program are creating a safe standard for their peers.

Teen Health Connection hosts weekly meetings that are open to the public. The only requirements are a commitment to being drug free and being a student in either 8th grade or high school.

MARQUETTE — There’s never a bad time to think about your mental health: Where it stands, how you can improve it, and where to go for help if you need … END_OF_DOCUMENT_TOKEN_TO_BE_REPLACED