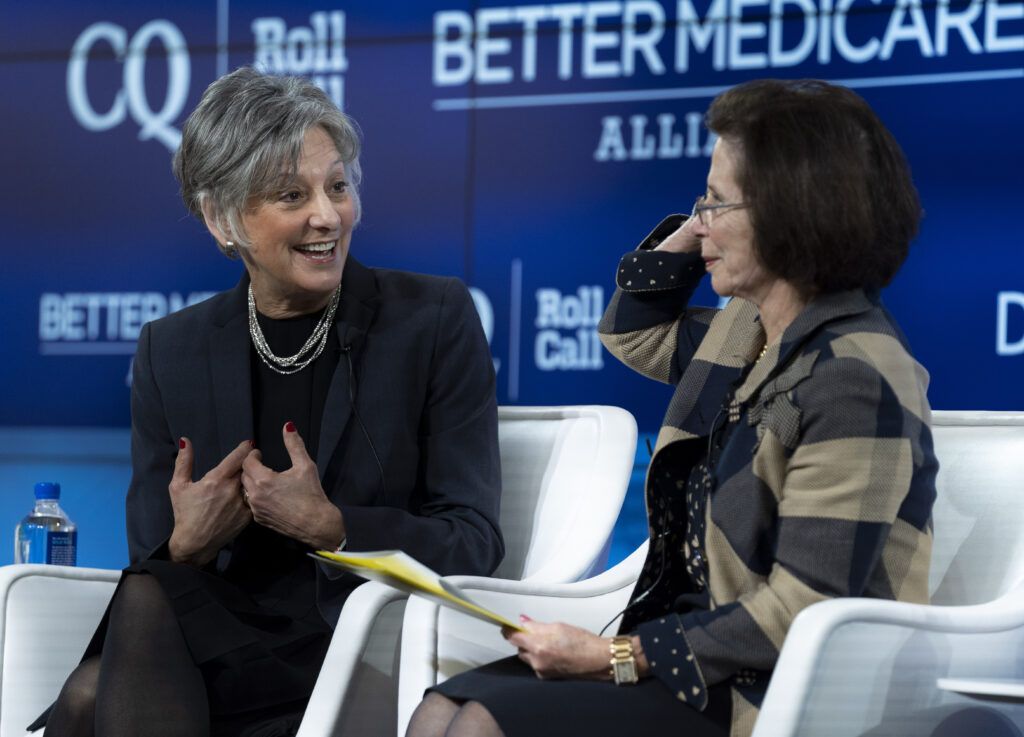 “I’m very proud of the work that I did insuring better health coverage for women, to make sure women had access to the health care they needed.”

“You can take on bold ideas and do it, get it done, and to be respected in a health care community,” said former Rep. Allyson Schwartz. (Courtesy)

From time to time, Ms. highlights feminist leaders who have accomplished much on behalf of women, but may not be household names. Former Rep. Allyson Schwartz was first elected to the Pennsylvania state Senate in 1990 and went on to become Pennsylvania’s longest serving U.S. representative, occupying the seat for five terms.

After her very successful career in politics, Schwartz has just stepped down as founder and CEO of the Better Medicare Alliance. Ms. Money Editor Martha Burk recently talked with her about successes and challenges in a most storied record of accomplishment.

Martha Burk: Let’s start with your early work. You founded and led a women’s health center in the 1970s. Roe v. Wade legalizing abortion was decided in ’73. What was it like running a clinic back then?

Allyson Schwartz: We did begin just after the Supreme Court decision in 1973. I had recently completed graduate school in social work and was working for a fledgling H.M.O., and keenly interested in women’s rights and women’s reproductive rights.

There was group of women ready to step up and face the challenge to make family planning and reproductive health and abortion services available, and to be run by women and to make sure we provided a safe space. We created a nonprofit, took out a bank loan, that was rather ambitious of us, and said we would just do it. I was the first director for over 12 years, and we served women of all incomes and races. It was an experience that proved to me that you can take on bold ideas and do it, get it done, and to be respected in a health care community. It was a remarkable experience.

Burk: Was that one of the motivators for you to run for public office later?

Schwartz: Yes. Certainly, my understanding of how important it was to have women in positions of power, including in making the laws of our land was very much a reason why I ran for office.

My mother was a Holocaust survivor, so I understood from a very young age that the government could do ill or do harm, and that we should be looking out not only for ourselves but the greater world around us when it came to discrimination and hate and violence. Those issues were just a part of who I am, feeling some responsibility to care about the world around me, and what happened to both my own people as a Jew, but also as a woman.

“The men in the Pennsylvania delegation were sometimes polite to me and sometimes not, but they certainly weren’t pleased that I was there, and they let me know it.”

Burk: You were Pennsylvania’s longest serving U.S. representative, and much of that time you were the only woman in the delegation. Was the ‘good ole boy’ network alive and well, and if it was, how did you handle it?

Schwartz: Well, I’ll say this with a smile, but it wasn’t always something to be smiling about. The men in the Pennsylvania delegation were sometimes polite to me and sometimes not, but they certainly weren’t pleased that I was there, and they let me know it.

“Sexism is alive and well in our world, and certainly in the halls of power,” said Schwartz, pictured here at an event involving the organization she founded and was formerly CEO, the Better Medicare Alliance. (Courtesy)

Burk: Do you think now that things have changed very much in Congress with the likes of Matt Gaetz showing nude pictures of women to his cronies on the House floor? Has it gotten any better for women?

Schwartz: You know, I have to say it has, but that doesn’t mean that it’s gone away. Sexism is alive and well in our world, and certainly in the halls of power. There were wonderful, strong, smart, talented women in Congress who were a fantastic support system to each other. Now there’s more willingness to speak up.

Seeing Nancy Pelosi become speaker was an incredible moment for so many of us, to see a woman rise to that level and to be so skilled at what she does. You still have to create relationships with both men and women if you want to be effective.

“Seeing Nancy Pelosi become speaker was an incredible moment for so many of us, to see a woman rise to that level and to be so skilled at what she does.”

Burk: You were a member of some very powerful committees, and you got a lot done when you were in Congress. What are you most proud of in terms of your many accomplishments, particularly those that affected women?

Schwartz: I’m very proud of the work that I did insuring better health coverage for women, to make sure women had access to the health care they needed.

Of course I spoke up on access to abortion services and to reproductive rights. I was a voice there, and coming from Pennsylvania, that was often important because there were a number of anti-choice legislators in our delegation, and they often worked together to make it more difficult to hang on to reproductive rights. So, it was important to have that Pennsylvania voice and that woman’s voice.

I did a good bit of work on Medicare, making sure women got the right kind of reimbursement. The Affordable Care Act happened while I was on Ways and Means Committee, and that was also a chance for me to speak out for access to primary care, to more integrated care and care coordination. 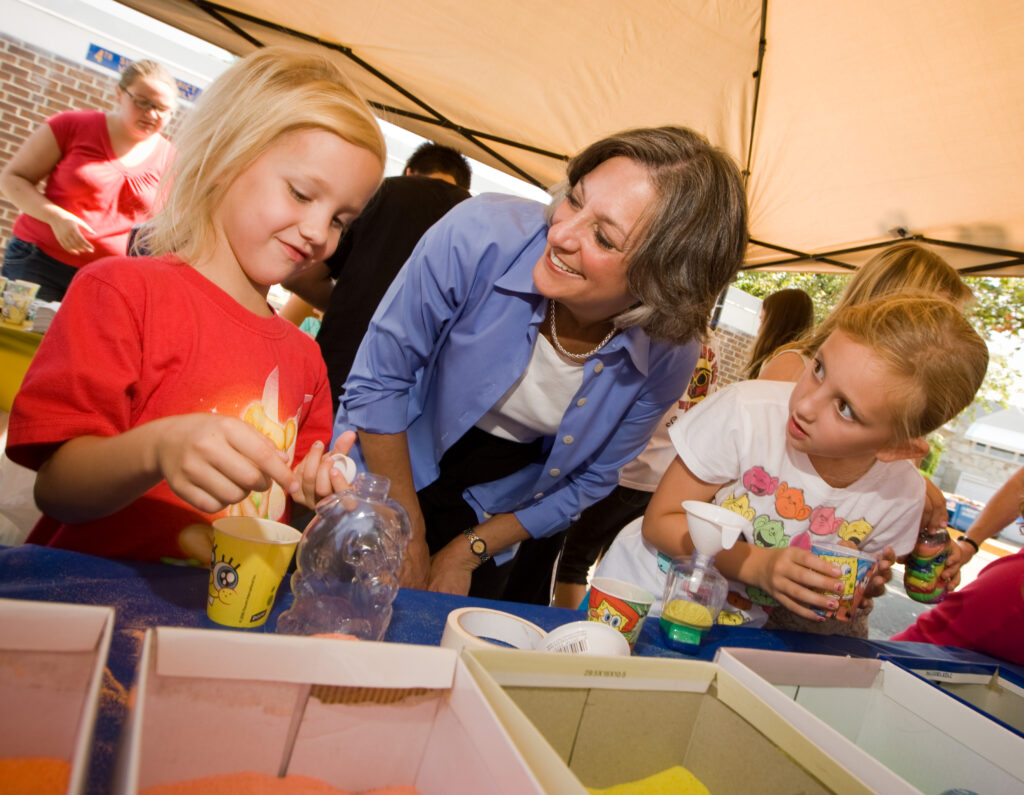 “When I left Congress, I knew I wanted to work in federal health policy driving change in how we deliver care, to improve health status and health outcomes,” said former Rep. Allyson Schwartz. (Courtesy)

Burk: In recent years you’ve helped recruit and mentor a lot of progressive female candidates, but women are still only about a quarter of the members of Congress right now. Are women more willing to run? And what do you see as the greatest barriers to women who would like to serve?

Schwartz: There are more women running and winning. Pennsylvania went from zero in Congress to four. It’s not always a straight line. You gain women, and then maybe you lose some, but women are running and winning. I did help to inspire women to step up and run … to take a chance … to be determined to win and to see them do so. I was head of recruitment for the Democratic Congressional Campaign Committee supporting women and people of color to run good campaigns, raise money and  galvanize voters. Since I’ve left Congress, I’ve stayed involved to support women running and women winning.

Burk: Your career since you left Congress has been very distinguished as well. You were the founder of the Better Medicare Alliance and just stepped down as the first CEO.

Schwartz: When I left Congress, I knew I wanted to work in federal health policy driving change in how we deliver care, to improve health status and health outcomes. So, when the search firm came to me and said there’s this idea to create an organization that would be a managed care option in Medicare, I took a chance. I took a risk.

I knew how to put an organization together, and I certainly believe what we do in Medicare really matters in health care more broadly. And six years later, we’ve built from the original 12 Allied Organizations to over 160 professional associations, like nursing associations and health systems, large insurance plans, and others who are providing services like meal delivery and support services to address social isolation. I’m very proud of the work that I’ve done at the Better Medicare Alliance, and I’m leaving an organization that is strong and capable and respected. 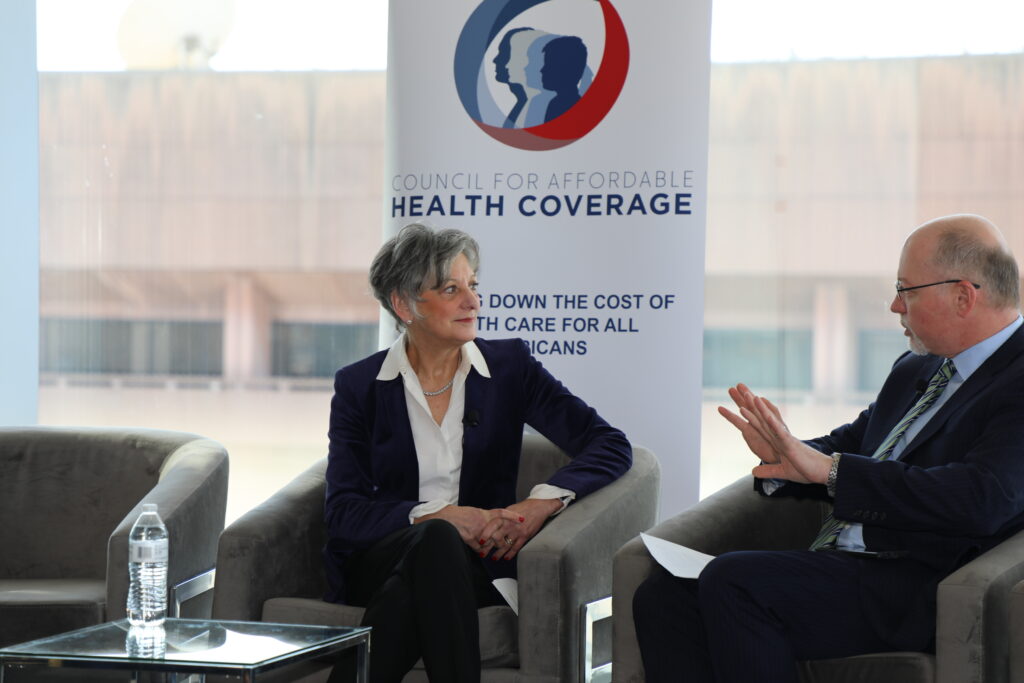 Former Rep. Allyson Schwartz at an event hosted by the Council for Affordable Health Coverage. (Courtesy)

Burk: I know a person as motivated and as accomplished as you are is never going to actually retire, so what’s your next step?

Schwartz: Well, I don’t call this retirement either, although my family and friends say you don’t have to work everyday every minute all the time. I do still come with that sense of drive and willingness to contribute and wanting to be useful. So I expect to do some consulting, and conversations in an academic setting to help bring the next generation along. I’m still going to be engaged in federal health policy, and that demands accountability from health systems and making sure that women’s voices are a part of that. I will also stay involved politically to be supportive of women running for office, maybe even a few good men running, and continue to contribute as long as I’m able.

If you found this article helpful, please consider supporting our independent reporting and truth-telling for as little as $5 per month.

MARQUETTE — There’s never a bad time to think about your mental health: Where it stands, how you can improve it, and where to go for help if you need … END_OF_DOCUMENT_TOKEN_TO_BE_REPLACED