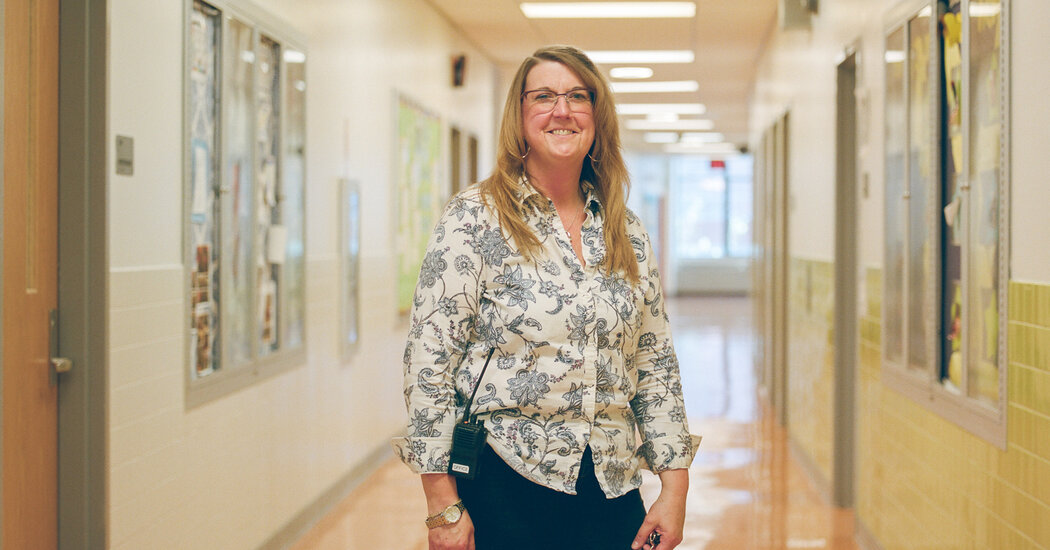 When the nation’s largest school system shuttered last spring, the one million students that had flooded its classrooms were abruptly sent home. Tens of thousands of teachers had just a few days to collect their papers and prepare for online classes before schools were mostly emptied. But in the absence of children and educators, there was a vast and often unseen force of essential school staff that never left New York City’s 1,800 school buildings.

A network of staffers — including cooks, custodians, maintenance workers and nurses — became part of something like a wartime effort to keep city schools clean, functioning and ready to eventually welcome children back.

As this disrupted school year draws to a close, parents, educators and students are looking forward to the return of normal schooling in September. But the city would not have been able to safely reopen schools at all without the grueling, dangerous work done by employees in cramped basement offices, boiler rooms and kitchens.

Here are four of their stories.

During the worst weeks of the pandemic last spring, when many New Yorkers stopped leaving their homes altogether, Theresa DiCristi did what she always does. She set her alarm for 2:30 a.m. and climbed onto a deserted Long Island Railroad car from her small town long before the sun rose. She would arrive by 5:30 at Public School 276, in the shadow of the World Trade Center, and unlock the front door of the empty building.

Then, she brought the school to life. As she fielded text messages from nervous friends and relatives, checking in to see if she was OK, Ms. DiCristi flipped the lights on and checked to make sure there were no issues with the boiler or the air conditioning, and that no mysterious water leaks had emerged overnight.

She and her team cleaned the hallways and cafeteria until they were sparkling, made sure dust didn’t pile up in classrooms, and distributed masks and hand sanitizer to families who came to pick up hot lunches.

The building felt as deserted as the sidewalk outside, but Ms. DiCristi knew she couldn’t leave the school unattended for long. She learned that lesson from her late father, a longtime custodial engineer in Brooklyn, who taught her how to do the job when she was a child. A framed photograph of him sits above her desk.

Ms. DiCristi was delighted when many of the school’s students returned last fall. “It was just like, thank you. We’re a school again, this is fantastic,” she said.

To prepare the school for the students, Ms. DiCristi and her team inspected every corner of each classroom, scrubbing down surfaces with new high-tech cleaners sent by the city.

Her school has only had a few positive virus cases since the students returned, and she said she’s looking forward to having all the students back in September.

“As long as we know that the kids are happy and the teachers are happy,” she said, “that’s what we’re here for.”

Just days after Robert Williams recovered from a serious bout of Covid-19 last March, he was back in school buildings, overseeing a team of carpenters who spent weeks in vacant school gymnasiums, building coffins for the hundreds of New Yorkers dying of the virus each day.

Mr. Williams, who manages all maintenance work for all Bronx schools, didn’t have time to absorb just how overwhelming — and risky — his job had become.

“You couldn’t really think about yourself, because if you did, you wouldn’t come in, because you were scared,” he said. But, he added, “you don’t get to walk away from this.”

By the summer, Mr. Williams was working every night and through the weekends to make sure school buildings were safe to welcome children back in the fall.

That meant a mad dash to check that every single window in every school in the borough could be opened to let in fresh air — but also to ensure that they didn’t open so wide that a child could accidentally fall out. His team checked every one of the thousands of windows three times before the first day of school.

They also cleaned ducts that had been gathering dust for years, and repaired fans and vents.

Mr. Williams remembered the frustration of having multiple mechanics trying to fix a faulty vent or fan in a classroom, only to report over a walkie-talkie that they still couldn’t feel fresh air. But there was nothing, he said, like the feeling of his team members shouting, “I got it! I feel it!” through the radio when air rushed in: a sign that the fix finally worked.

Mr. Williams said the last year of work has been the most gratifying of his life.

Now, when he passes a Bronx school and sees children walking through the front door, or families lined up to get hot lunches, he thinks, “Nobody knows who I am.” But he doesn’t mind.

‘I’m just doing what I’m happy to do’

“This is Cam Hawkins, the school nurse at Star Academy. First of all, your child is fine.”

That’s how Mr. Hawkins starts nearly all of his calls to parents of sick children. He knows those calls can be stressful even during normal times because all the students he serves have complex disabilities. But this year, it sometimes felt like families’ anxiety about the virus was radiating through the phone.

Even when some students spiked fevers over 100 degrees in his office or when weekly testing in schools revealed the occasional positive case, Mr. Hawkins knew a big part of his job was to project calm. But the worst days of the pandemic have given him much deeper ambitions for what a school nurse could do.

Over the last year, nurses across the city were dispatched anywhere they were most urgently needed. Mr. Hawkins was assigned night shifts at a nursing home where most patients were on ventilators, either because of Covid or another medical issue. Riding his bicycle from his home in the Fort Greene neighborhood of Brooklyn to an East Harlem nursing home, Mr. Hawkins would think about what he could do to make sure his future students at Star Academy didn’t end up like the patients he was caring for.

“That weighed on my mind,” he said. “I thought, what is it that I can do that, 40 or 50 years later, this child will be in a better position if I can start doing that now.”

Mr. Hawkins started at the school last fall, its first full-time nurse in two years. He has made it his mission to get to know each student, often standing outside the building as school buses arrive to greet children, making notes of the names mentioned over the public announcement system. He wants to match the children’s names to their faces, but also get to know their personalities and quirks.

Mr. Hawkins is already excited to see all students back on the first day of school.

“Sept. 13 is the day everyone is looking forward to,” he said.

‘Stay home and do what?’

It’s easy for Stephen Ali to spot a hungry child, those students who linger for a few moments after he hands them their milk cartons in the morning or pizza slices at lunch.

“I say, ‘If you need another one, take another one, it’s there,’” said Mr. Ali. “‘You want two, you take two.’” Second helpings are officially frowned up, but Mr. Ali knows just how hard it is to teach a student who hasn’t had enough to eat. Before he immigrated to the Bronx nearly a decade ago, he was an elementary schoolteacher in his native Guyana for almost 30 years.

“If they’re hungry, they’re going to sleep and they won’t be able to concentrate on what they’re doing,” said Mr. Ali. “They’re thinking about food, so we give them the food.”

Mr. Ali has had a hectic schedule since he started working at Public School 159 in 2014: On a normal day he arrives at school around 7 a.m., a half-hour before his shift starts, to prepare breakfast for the students. By 10:30, children begin lining up for lunch.

Even though his schedule was disrupted by the pandemic, Mr. Ali and the school’s cook began preparing meals for anyone in the community who needed them, as part of the city’s push to ramp up food distribution for vulnerable New Yorkers.

Each morning when Mr. Ali walks up a flight of stairs from the kitchen to the school’s entrance to drop off cheese sandwiches and zucchini bread, he sees a line of his neighbors already gathered outside. He sometimes passes them again during his afternoon walk home, from the school to the apartment he shares with his sister and brother-in-law.

He tried to keep his family safe during the height of the pandemic by tucking a bottle of hand sanitizer into his green apron and slipping a tissue under his surgical mask for extra protection.

MARQUETTE — There’s never a bad time to think about your mental health: Where it stands, how you can improve it, and where to go for help if you need … END_OF_DOCUMENT_TOKEN_TO_BE_REPLACED