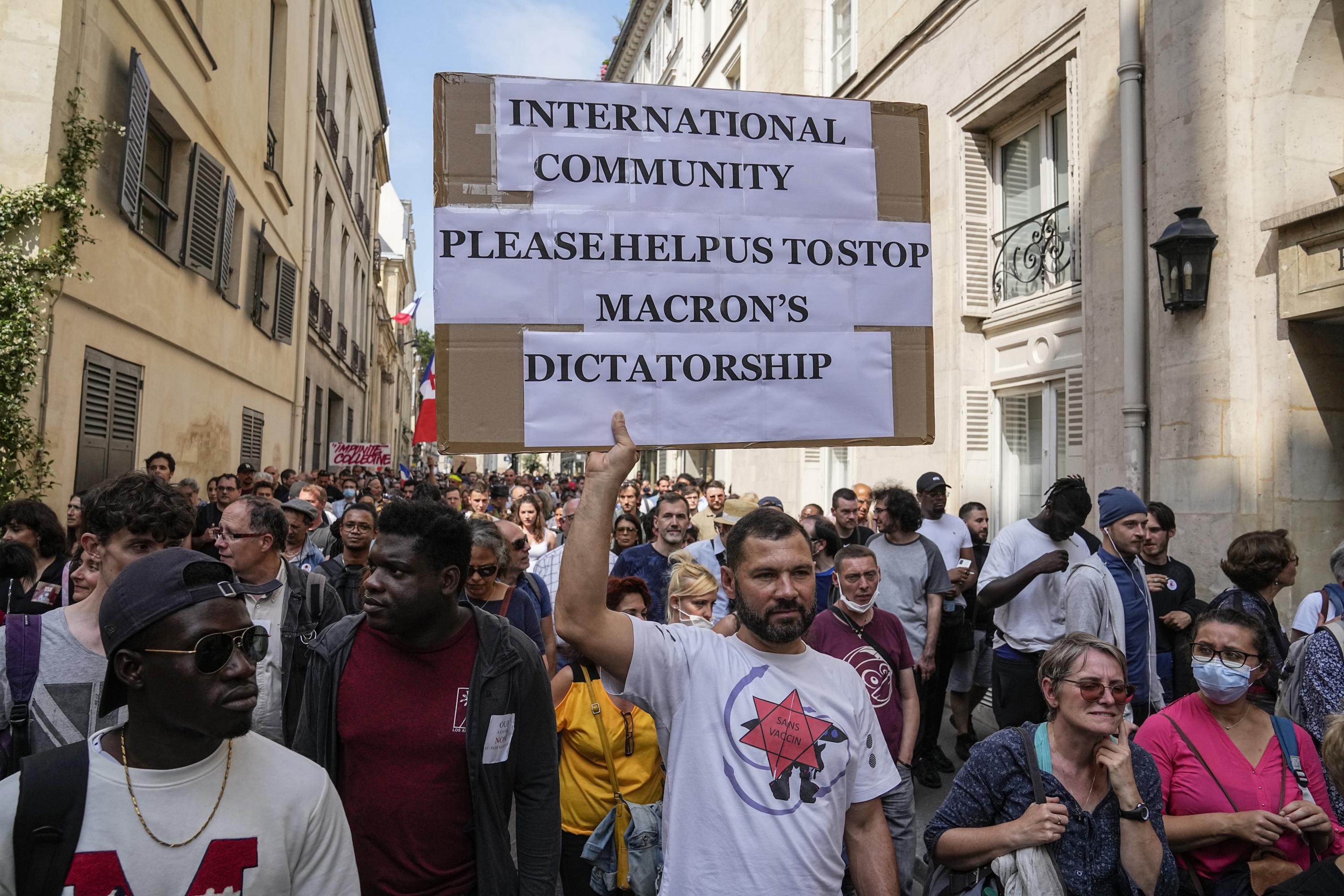 PARIS (AP) — Over 100,000 people protested across France on Saturday against the government’s latest measures to push people to get vaccinated and curb rising infections by the delta variant of the coronavirus.

In Paris, separate protest marches by the far-right and the far-left wound through different parts of the city. Demonstrations were also held in Strasbourg in the east, Lille in the north, Montpellier in the south and elsewhere.

Thousands of people answered calls to take to the streets by Florian Philippot, a fringe far-right politician and former right hand of Marine Le Pen who announced earlier this month that he would run in the 2022 presidential election. Gathered a stone’s throw away from the Louvre Museum, protesters chanted “Macron, clear off!”, “Freedom,” and banged metal spoons on saucepans.

They denounced the government’s decision on Monday to make vaccines compulsory for all health care workers, and to require a “health pass” proving people are fully vaccinated, have recently tested negative or recovered from the virus in order to access restaurants and other public venues. President Emmanuel Macron’s government is presenting a draft law Monday to enshrine the measures.

“I will never get vaccinated,” Bruno Auquier, a 53-year-old town councilor who lives on the outskirts of Paris. “People need to wake up,” he said, questioning the safety of the vaccine.

While France already requires several vaccinations to enter public school, Auquier pledged to take his two children out of school if the coronavirus vaccine became mandatory. “These new measures are the last straw,” Auquier said.

The government warned of the continued spread of the delta variant, which authorities fear could again put pressure on hospitals if not enough people are vaccinated against the virus. The pandemic has cost France more than 111,000 lives and deeply damaged the economy.

During a visit to a pop-up vaccination center in the southwest, Prime Minister Jean Castex exhorted the French to stick together in order to overcome the crisis.

“There is only one solution: vaccination,” he said, stressing it “protects us, and will make us freer.”

At the Paris protest, a manual worker in his sixties expressed bitterness about jobs in his sector sent offshore. A 24-year-old royalist said he was there to demand “the return of God and the King.”

Lucien, a 28-year-old retail shop manager, said he wasn’t anti-vaccine, but thought that everyone should be able to do as they please with their own body. “The government is going too far,” he said. His 26-year-old friend Elise said, “I am vaccinated against diphtheria, tetanus, and polio. But the COVID vaccine is just too experimental.”

While a majority of French health care workers have had at least one vaccine dose, some are resisting the government’s decision to make vaccination compulsory for all staff in medical facilities.

At Saturday’s Paris protest, a 39-year-old green party supporter and hospital laboratory worker said she might resort to buying a fake vaccination certificate to avoid losing her job. A health care worker dressed as the Statue of Liberty called it “act of violence” to force people to get vaccinated.

Overnight on Friday, vandals ransacked a vaccination center in the southeast. Interior Minister Gérald Darmanin asked prefects and police chiefs to reinforce security for elected officials, after several complained they had received threats in recent days over the latest anti-COVID measures.

Vaccine hesitancy is considered widespread in France, though appears to have faded somewhat as 36 million French people have gotten coronavirus vaccine doses in recent months. Millions more have gotten injected or signed up for vaccinations since Monday’s announcement.

French health care workers have until Sept. 15 to get vaccinated. The requirement for COVID passes for all restaurants, bars, hospitals, shopping malls, trains, planes and other venues is being introduced in stages starting Wednesday.

Meanwhile, the French government announced tightened border controls starting Sunday, but also said it would allow in travelers from anywhere in the world who have been fully vaccinated.

That now includes people who received AstraZeneca’s Indian-manufactured vaccine. The move came after a global outcry over the fact that the European Union’s COVID-19 certificate only recognizes AstraZeneca vaccines manufactured in Europe.

Elaine Ganley in Montpellier and Angela Charlton in Paris contributed.

MARQUETTE — There’s never a bad time to think about your mental health: Where it stands, how you can improve it, and where to go for help if you need … END_OF_DOCUMENT_TOKEN_TO_BE_REPLACED