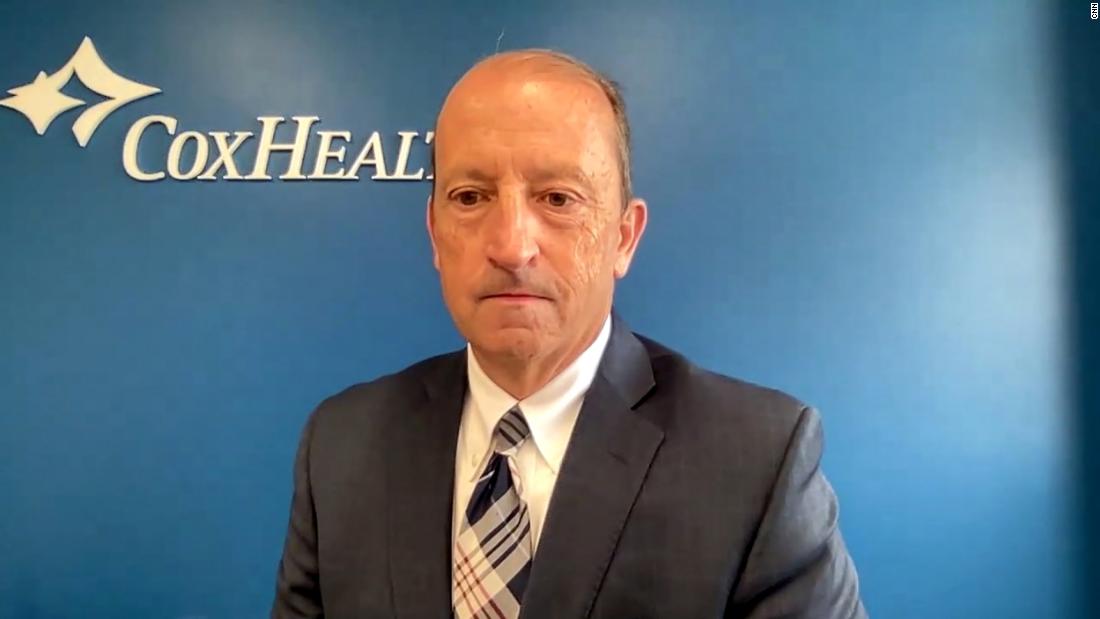 He is desperately trying to figure out how to get through to people.

“If I knew how I was missing the mark, we could correct and change,” he told CNN’s Alisyn Camerota. The community needs 80 to 90% of people to get immunity either from getting inoculated or catching the virus, he said.

“We’re not nearly halfway there. This will roar on for quite some time,” he said.

He said he thinks the vaccine hesitancy stems from mistrust of the government or institutions. He said doctors have seen patients who didn’t get a vaccine because it is under emergency use authorization who ask for monoclonal antibodies — that are also available under an EUA.

“Someone got into their head that the vaccine is not safe,” he said. “It might be the safest vaccine in the history of man. And we somehow have not overcome that.”

Edwards said he feels guilty because he is the most prominent voice in the local health care community and people continue to die unnecessarily. He struggles because he thinks his voice could be heard better and he could have save some lives.

“Every vaccine can save a life,” he said.

US Surgeon General Vivek Murthy said he is concerned because the Delta variant of coronavirus is spreading quickly among unvaccinated people, who account for the vast majority of coronavirus hospitalizations and deaths nationwide.

“The thing that’s making this possible is the fact that we are dealing with the most transmissible version of Covid-19 that we’ve seen to date,” he said.

Despite being shown an AP-NORC poll that suggests 45% of people will definitely not get vaccinated, Murthy said: “Well, I’m certainly not giving up on making sure that we continue to work hard to get people vaccinated and I don’t think that we’ve actually reached the limit (on vaccine outreach) yet.

“Every day more than half a million people are making the active choice to get vaccinated. That’s a lot of people … and so we are making progress. We just want to make faster progress.”

Health experts blame the recent surges in Covid-19 cases on the low rate of vaccinations. And now the accelerating Delta variant is threatening to increase hospitalizations and deaths as well, one expert said Thursday.

“This is a self-inflicted wound, because we can prevent all of those hospitalizations and deaths — or at least 98, 99% of them — if we can encourage vaccination,” Dr. Peter Hotez, dean of the National School of Tropical Medicine at Baylor College of Medicine, told CNN’s Jim Acosta.

More than 91 million people live in a county considered to have high Covid-19 transmission, according to the Centers for Disease Control and Prevention. Every state on Friday had a seven-day average of new cases higher than the week before, according to data from Johns Hopkins University.Yet, despite the warnings from health experts, the daily pace of people becoming fully vaccinated keeps falling. It’s now the lowest it’s been since the end of January, when the US had only been vaccinating for about six weeks, according to CDC data.

The US government has purchased an additional 200 million doses of the Pfizer/BioNTech vaccine, BioNTech said in a news release Friday. More than half should arrive by the end of the year, and the rest by May of next year. That would bring to 500 million the total number of doses supplied by Pfizer.

Only 48.9% of the US population is fully vaccinated, and the seven-day average pace is around 249,000. The average hasn’t been above 500,000 fully vaccinated people per day since July 5, according to CDC data.

“We’re all thinking that another surge is likely,” said Dr. Christian Sandrock, director of critical care at UC Davis Medical Center, in a statement Thursday. “It is frightening. I don’t think we’ll go back to the worst we’ve seen, due to the vaccine, but it’s hard to tell.”

Alabama has the lowest rate of vaccinations at 33.9%, CDC numbers reveal. Mississippi has also vaccinated less than 35%.

A return to masks

Some regions are returning to masks in the hopes of slowing the spread.

In Texas, Harris County Judge Lina Hidalgo warned that the region is “at the beginning of a potentially very dangerous fourth wave of this pandemic” and raised the threat level from yellow to orange, urging community members to wear masks.

“So, I know they’re uncomfortable, I don’t like wearing masks either, but until we get the numbers back down, let’s all wear masks again,” the judge said of the county that includes Houston, the nation’s fourth most populous city.

Masks are recommended indoors for all vaccinated and unvaccinated individuals, according to Austin-Travis County’s Covid-19 risk-based guidelines. Austin Mayor Steve Adler says if he could “order all children and teachers to mask without ending up in court,” he “would do it in a heartbeat.”

Texas Gov. Greg Abbott issued an executive order in May prohibiting state governmental entities such as counties from requiring that masks be worn.

The number of hospitalizations has crossed the threshold of over 30 admissions per day, officials say.

The CDC still recommends that unvaccinated people wear masks, but the choice is up to the individual if they are vaccinated, Director Dr. Rochelle Walensky said Thursday.

“If you are vaccinated, you get exceptional protection from the vaccines, but you have the opportunity to make the personal choice to add extra layers of protection if you so choose,” she said.

Experts are warning that even people who are vaccinated need to be concerned about the surge.

“If there’s all kinds of virus around you, if you’re in a community with a lot of virus, then because these vaccines are not 100%, it is going to impact you,” CNN Medical Analyst Dr. Leana Wen told CNN’s Anderson Cooper on Thursday.At this time of the summer, transmission rates should be low, said CNN’s Chief Medical Correspondent Sanjay Gupta, speaking on the same show. In the warm weather of July, people are primarily socializing outside, where the virus is less likely to spread, he said.

Come the drier, colder weather of the fall and winter, transmission rates might go up even more, Gupta added.

“So, this could be as good as it gets at least for a period of time,” he said.

For people who are vaccinated, their immune systems are much better equipped to protect them against the virus, but not perfect, Gupta said. Some might not get symptoms if they are infected, but some might end up being protected from hospitalization and still get sick, he said.

Wen compared vaccination to wearing a seat belt: it is a crucial layer of protection, but it is not foolproof against the reckless behavior of others.

“But saying that doesn’t mean undermining confidence in seat belts. It just saying that the choices that other people are making influence us, too,” Wen said.

Walensky said Thursday that the Delta variant is an “aggressive and much more transmissible” strain of the virus.

“It is one of the most infectious respiratory viruses we know of, and I have seen in my 20-year career,” Walensky said at a White House Covid-19 briefing.

The spread of the variant makes vaccination even more important, Walensky said.

“If you are not vaccinated, please take the Delta variant seriously. This virus has no incentive to let up, and it remains in search of the next vulnerable person to infect,” she said.

According to CDC data released earlier this week, the Delta variant represents an estimated 83% of all coronavirus samples sequenced in the last two weeks. The good news is data shows vaccines are working as they did in clinical trials against the variant, Walensky said.

“At the beginning of the pandemic, the CDC said that a close contact was somebody that you’re indoors with unmasked for 15 minutes or more,” Gounder said in an interview with STAT published Friday. “The equivalent of that with the Delta variant is not 15 minutes, it’s one second.”

Three important measures to fight the variant are vaccines, masks and good ventilation.

People should think in terms of how much virus there is in the air, plus how long they might be in contact with that virus-laden air.

“So if you’re indoors, there’s not a lot of air dilution unless you’re opening up windows and doing that sort of thing. When you’re outdoors, it’s almost infinitely diluted. And so outdoors, your risk is really low,” Gounder said.

She added that opening windows at home works really well.

MARQUETTE — There’s never a bad time to think about your mental health: Where it stands, how you can improve it, and where to go for help if you need … END_OF_DOCUMENT_TOKEN_TO_BE_REPLACED