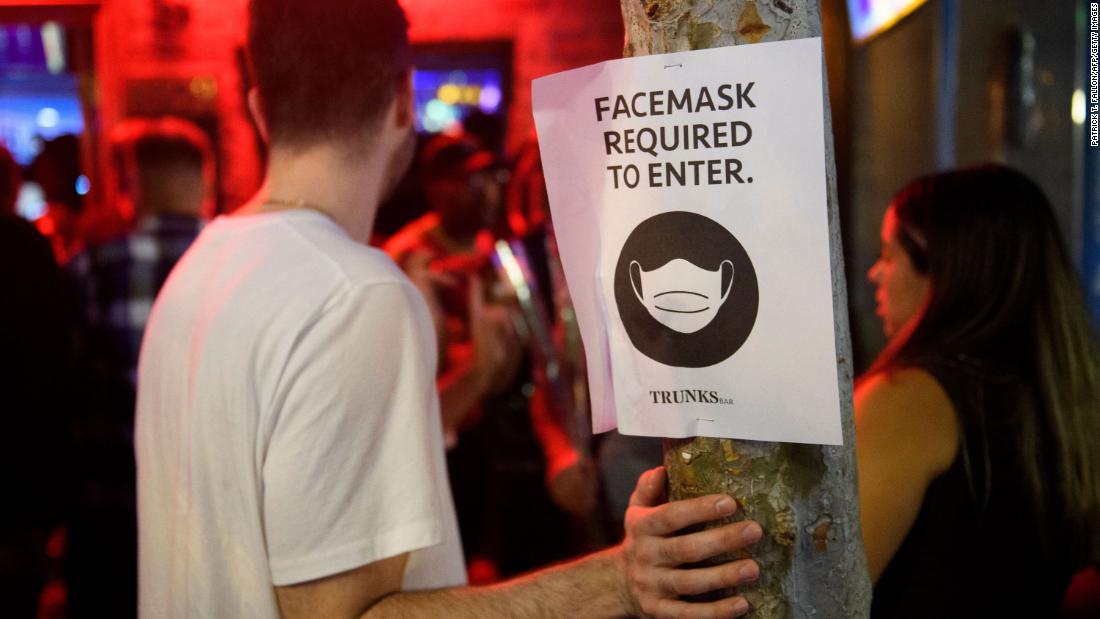 “And for most people who get this Delta variant, it’s going to be the most serious virus that they get in their lifetime in terms of the risk of putting them in the hospital,” Dr. Scott Gottlieb, commissioner of the US Food and Drug Administration during the Trump administration, told CBS’ “Face the Nation” Sunday.

Delta is the most transmissible Covid-19 variant yet, US Surgeon General Dr. Vivek Murthy told CNN. And experts say it is exacerbating the rise in cases among unvaccinated Americans.

In Los Angeles County, the rate of new Covid-19 cases has increased 300% since July 4, the county health department said. Covid-19 hospitalizations have more than doubled from the previous month.

And 48 states are now seeing new case numbers surge at least 10% higher than the previous week, according to data from Johns Hopkins University.

That is concerning, Murthy said, because often a rise in cases and hospitalizations is followed by a rise in Covid-19 deaths. Experts are particularly worried about the unvaccinated populations, as 99.5% of the deaths from Covid-19 occur among people who have not been vaccinated, Murthy said.

The only way to stem the rise in cases is vaccination, Murthy told CNN’s Dana Bash Sunday.

The fight to increase vaccinations is transitioning to the hands of local leaders, Murthy said. Springfield, Missouri, Mayor Ken McClure told “Face the Nation” he hopes community leaders will convince people to get vaccinated before it is too late.

“So it gets down to the community leaders, the community institutions that people trust saying you have to get vaccination. That’s the only way that we are going to emerge from this,” McClure said.

The Delta variant might spread faster than other strains of coronavirus because it makes more copies of itself inside our bodies at a faster pace, researchers found.

In research posted online, scientists examining 62 cases of the Delta variant found viral loads about 1,260 times higher than those found in 63 cases from the early epidemic wave in 2020.

The Delta variant is also sending younger and previously healthy people to hospitals — the vast majority of which have not been vaccinated, say doctors in several states suffering surges.

“This year’s virus is not last year’s virus,” said Dr. Catherine O’Neal, an infectious disease specialist at Our Lady of the Lake Regional Medical Center in Baton Rouge, Louisiana.

“It’s attacking our 40-year-olds. It’s attacking our parents and young grandparents. And it’s getting our kids,” O’Neal said. She said her Covid-19 unit now has more patients in their 20s than previously during the pandemic.

In the face of rampant misinformation about the virus and the vaccine, McClure urged people to use trusted sources and to “make sure people have good information.”

Misinformation “takes away our freedom,” Murthy said, adding that the inaccurate information inhibits people’s power to make educated decisions about the health of themselves and their families.

And with the virus’ disproportionately higher impact among people who aren’t vaccinated, the consequences can be severe.

“All this misinformation that’s floating around is having a real cost that can be measured in lives lost, and that is tragic,” Murthy said.

One important reason adults should get vaccinated, experts have said, is to protect children who are not yet eligible for the vaccine.

Currently, Covid-19 vaccines are only authorized for children 12 and older, but studies are underway to test the safety and efficacy of vaccinating younger children.

On Saturday, Dr. Anthony Fauci, director of the National Institute of Allergy and Infectious Diseases, shed light on the timeline for approving Covid-19 vaccines for children younger than 12.

Right now, he told CNN’s Jim Acosta, scientists are conducting studies in de-escalating age groups, looking at children from 12 to 9-years-old, then 9 to 6, 6 to 2 and then 2-years to 6-months old.

“Thus far, things look good, but the final decision is going to be up to the FDA. And I would imagine that likely will not happen until we get well into the winter, towards the end of this year,” Fauci said.

In Alabama, which has one of the lowest vaccination rates in the US, a three-and-a-half-hour vaccination clinic at a church outside of Birmingham Sunday yielded little progress as only 11 people showed up.

MedsPlus, the health care provider on site, has been holding clinics at churches, business and community centers, in hopes of partnering with local leaders that people trust. But according to Alabama Public Health Department’s dashboard, the number of vaccines administered in the state has dropped off in a steep decline since the peak in March and April. According to data from the CDC, just 33.7% of Alabama’s residents were fully vaccinated as of Sunday.

Since April 1, 529 people have died in Alabama from Covid-19. According to the Alabama Public Health department, about 96% of them were unvaccinated.

Shuntasia Williams, 15, said she got her first dose of vaccine at the event because she wants to be protected when school starts next month. She told CNN she’s proud of her friend group for being vaccinated, but she has also seen rumors online that her peers are falling for.

“I seen somebody that said their arm got so swollen, it had to get amputated off,” Williams said. “That is the most crazy thing. One thing about vaccines is they start spreading rumors about it, but you have to get out and see it for yourself.”

Williams said these are not first-hand accounts by people, but rather misleading posts and articles that continue to be shared.

“Take it from me. I’m 15 years old. Go get the vaccine. It’s not shocking. My arm is not swollen. I’m not getting my arm amputated. I’m actually feeling great,” she said.

MARQUETTE — There’s never a bad time to think about your mental health: Where it stands, how you can improve it, and where to go for help if you need … END_OF_DOCUMENT_TOKEN_TO_BE_REPLACED