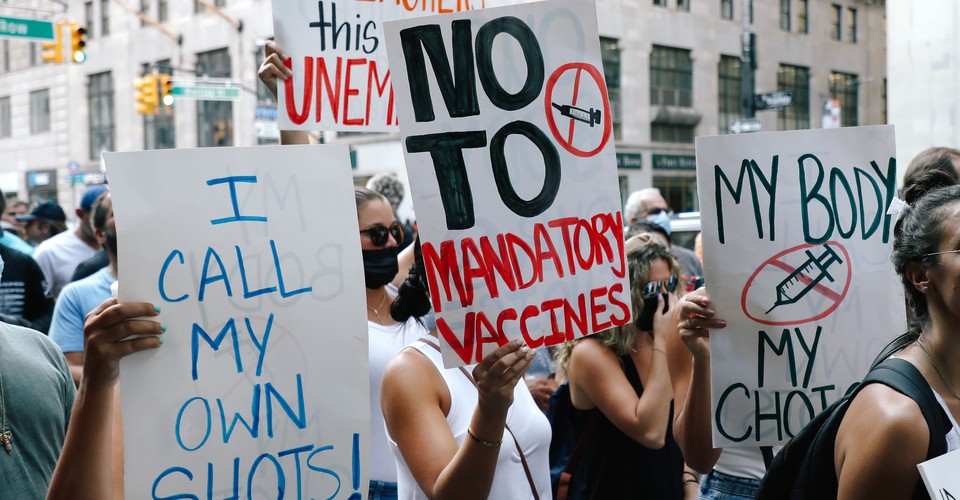 People who opt out of shots shouldn’t expect their employers, health insurers, and fellow citizens to accommodate them.

About the author: Juliette Kayyem, a former assistant secretary for homeland security under President Barack Obama, is the faculty chair of the homeland-security program at Harvard’s Kennedy School of Government. She is the author of Security Mom: An Unclassified Guide to Protecting Our Homeland and Your Home.

For months, institutions and companies have been drafting plans to aggressively promote vaccination or require it outright, and last week the FDA gave them license to click the “send” button. The same day the agency granted full approval to the Pfizer COVID-19 vaccine, New York City’s public school system announced that its teachers and other employees will be required to get shots. The next day, Louisiana State University made a similar demand of its students and faculty. Within about 24 hours of the FDA move, other major employers, such as Chevron and Goldman Sachs, rolled out new vaccine mandates. In a novel twist, Delta Airlines announced that it would impose a $200-a-month health-insurance surcharge on unvaccinated employees. Regardless of the reasons for their hesitancy, unvaccinated employees will literally have to pay for it.

What all of these decisions show is that the adults running major institutions in our society want to move forward, and they are done waiting around for vaccine refusers to change their mind. Outside of executive suites and human-resources offices, plenty of other Americans are also craving more certainty. Bars and restaurants that want to stay open are beginning to check vaccination cards—at least in states where supposedly freedom-loving lawmakers haven’t forbidden private businesses from keeping their own customers and employees safe. Couples throwing weddings are demanding that their guests upload proof of vaccination. These people disinviting their anti-vaxxer relatives are saying something important: Getting a shot to protect yourself and others from COVID-19 is both a social responsibility and the best way to hasten the end of the pandemic, and if you don’t believe that, we’re not waiting around for you to step up.

Read: How the pandemic now ends

More than 70 percent of eligible Americans have now received at least one dose. Since January, public-health researchers, news reporters, and pollsters have all tried to unearth the reasons that a significant fraction of American adults have not yet gotten a shot. Some are broadly misinformed; others are afraid of needles or potential side effects; still others are deeply suspicious of the medical system; some have had COVID-19 already and believe that the level of natural immunity they have developed is enough. Some refusers say they definitely won’t get vaccinated; others say they haven’t yet gotten to it. But the specific feelings and concerns of vaccine refusers should be largely irrelevant to vaccinated people who are eager to move on with their lives. Americans are entitled to make their own decisions, but their employers, health insurers, and fellow citizens are not required to accommodate them.

The vaccinated have for too long carried the burden of the pandemic. In theory, unvaccinated people should be taking greater precautions. A recent poll conducted for the Associated Press found that vaccinated adults have been more likely than unvaccinated ones to wear masks in public settings, refrain from unnecessary travel, and avoid large group settings.

Public-health officials can keep trying to figure out ways to persuade the unvaccinated to get shots, and maybe at this late point they can still discover some new message that succeeds where all others have failed. If so, that would be fantastic. But begging is not a strategy. It is not a coincidence that many of the entities pushing hardest for mandatory vaccination are in industries—higher education, travel, entertainment—that have been badly disrupted by unpredictable waves of infection and are existentially threatened by a pandemic that goes on without end.

People in the crisis-management field have made peace with blanket one-size-fits-all policies that some individuals don’t like. When a ship is going down, passengers aren’t given the luxury of quibbling with the color or design of the life vest, and they can’t dither forever about whether to put one on or not. Emergencies invariably force people to make some choices that they might not consider ideal, but asking everyone to get vaccinated against a potentially lethal virus is not a big imposition. Ironically, by talking as if everyone, given enough time, will eventually choose the shot, public-health agencies may have understated the urgency of the matter and invited the vaccine-hesitant to dwell on the decision indefinitely.

The Biden administration could do even more to assist the communities and businesses that are trying to nudge unvaccinated people along. In 2021, paper cards that can easily be lost, damaged, or falsified are an outmoded way to keep track of who has gotten a shot. Even establishments that check their patrons’ vaccination status are doing so in makeshift ways—for instance, by asking patrons to show a driver’s license alongside a picture of their vaccination card on their phone. Some states are moving forward with their own vaccination-verification apps, but the failure to plan a national system will be viewed, in time, as a costly concession to a vocal minority.

Employers are being creative with some of their requirements, creating so-called leaky mandates. Rather than fire noncompliant employees, for example, Delta Airlines opted for a financial penalty. This approach may make particular sense in industries where a rapid round of terminations will hurt a business’s ability to function. It also acknowledges the free will of vaccine refusers: They can keep rejecting the shot, as long as they accept the consequences.

Read: How did it come to this?

Up to this point, many employers and medical providers—wary of offending anyone—have been careful to describe vaccination as a deeply personal decision. Vaccination mandates are essentially a recognition that vaccinated people have feelings too, and that the burden of fighting the pandemic shouldn’t be on them alone.

I know, I know: I should try harder to understand the feelings of unvaccinated Americans. Being more patient and empathetic would make me sound nicer. But do you know what’s really nice? Going back to school safely. Traveling without feeling vulnerable. Seeing a nation come back to life.

MARQUETTE — There’s never a bad time to think about your mental health: Where it stands, how you can improve it, and where to go for help if you need … END_OF_DOCUMENT_TOKEN_TO_BE_REPLACED