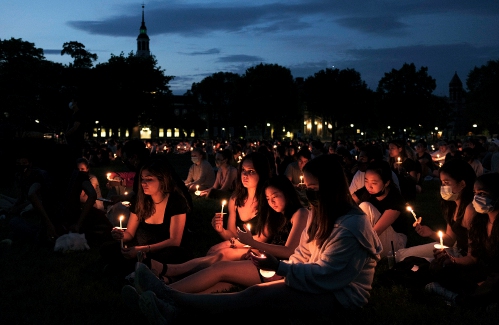 HANOVER — Dartmouth College students are calling on school administrators to do more to support their mental health and to allow them to grieve following the death of a fourth student this academic year.

While they welcomed the changes the college announced May 21 to bolster the school’s mental health services, relax some COVID-19 precautions and give students some more academic flexibility, several said the changes didn’t go far enough.

“It’s just a small step forward,” said Jason Acosta Espinosa, a member of the Class of 2024. “It just does not mean enough to me.”

Espinosa, who traveled with a group of his classmates to New York last week to attend the burial of their friend Elizabeth Reimer, said he feels the college’s response to the deaths has been inadequate. He is among those asking Dartmouth officials to revisit the school’s medical leave policy, which they say discourages students from seeking mental health care or being honest about their mental state once they do, as well as to give students — especially those in the Class of 2024 — a break from academic pressures so they have time to mourn the loss of their classmates.

Reimer died by suicide at her home in Long Island, N.Y., on May 19. It was the second known suicide among members of the Class of 2024 this year. Freshman Beau DuBray from the Cheyenne River Sioux Tribe in South Dakota died by suicide on campus in November.

2024 classmate Connor Tiffany, of Virginia, died unexpectedly in March in Boston. Additionally, Lamees Kareem, a junior from Saudi Arabia, died in April of a medical condition not related to COVID-19.

“How can the show go on when there are students around us dying?” said Espinosa, who is a member of the Student Assembly. “I’m someone who tries to keep busy 24/7. It’s becoming so overwhelming for me to continue to feel this need to move on.”

Dartmouth sees about 25% of its student body, both graduate and undergraduate, for counseling each year, spokeswoman Diana Lawrence said in an email. (Based on Dartmouth’s total student population of 6,500, that’s about 1,625 seeking counseling.)

The school has 25 to 30 voluntary hospital admissions each year, and most students return to campus following their treatment and complete the term, Lawrence said.

The college’s expanded services announced earlier this month included adding a second nurse to the on-call staffing at Dartmouth Health Service, as well as two new counselors and a student wellness coordinator. The college also rolled back COVID-19 restrictions so that social distancing requirements on campus were reduced from 6 feet between people to 3 feet, allowing students living in dorms to host two other students also living on campus in their dorm rooms at a time.

For students who are struggling academically, the college extended deadlines for electing a non-recording grade option or an incomplete.

Students with urgent mental health issues who seek services through the college are seen on the same day, while those with less urgent needs are seen within four days, said Kathryn Lively, dean of the college, during a webcast community conversation with Provost Joseph Helble on Wednesday.

Those wait times are “shorter than you would find in the community,” she said.

The college has added five clinical staff to its mental health services in recent months, Lively said. The service has 12 counselors, a counseling case manager and two prescribing psychiatrists. Additionally, Lively said, her office is working to finalize job descriptions for the three new positions announced May 21.

But anger over what some students say is an inadequate response has also led to vandalism on campus.

“Involuntary medical leave is cruel,” was written in red paint on President Phil Hanlon’s driveway following Reimer’s death, according to a photo posted to the anonymous app Librex that was shared with the Valley News.

Another photo posted to the app showed red paint splattered on the steps leading to Parkhurst Hall, which houses the president’s office, along with a message that said, “Paint is impermanent. Loss of life is forever.”

Attiya Khan, a Dartmouth junior, wrote in a column last week in the campus newspaper, The Dartmouth, that the college’s effort to bolster its mental health services “fails to consider the fact that the current medical withdrawal policies of the College are an active disincentive for students to seek help, no matter how many counselors are available.”

She wrote that “if communicating with a counselor honestly about suicidal ideations or plans results in forcible committal or removal, any student concerned about their education and ability to utilize campus resources will feel pressure to simply lie or avoid counseling in the first place.”

In a phone interview, Khan said she sought services when she was a freshman at the college in 2018, when she moved to Hanover from Seattle as a low-income, first-generation college student. She found managing coursework and learning to read and write like a college student to be difficult having come from an “underfunded public school system.”

When she reached out for support, Khan said, the college required she waive her right to medical confidentiality so administrators could review her records as they decided whether she could remain on campus. She was frustrated that the decision of whether to remain at Dartmouth had been taken out of her hands.

“It felt like I was being punished,” she said. Khan said the experience exacerbated the perception she had that she “wasn’t cut out to be here.”

She said if she had been forced to leave, she wouldn’t have had access to treatment through Dick’s House, Dartmouth’s student health services. As a result, Khan said, she felt that she couldn’t be honest with her counselors.

The message that Khan said she has gotten from the college is: “Our job is to give you an education. It’s not to care for you.”

Although not commenting on a specific case, Lawrence, the Dartmouth spokeswoman, said the college approaches each medical leave case on an individual basis.

“We involve the family, the team at the hospital, a representative from the Dartmouth Health Service, and the dean’s office in determining whether the student’s condition cannot be addressed through reasonable accommodations that could permit the student to continue to participate in the Dartmouth community and requires a level of care exceeding what Dartmouth can appropriately provide,” she wrote.

More than 90% of medical withdrawals are requested by students, “who feel they need a break and are struggling academically,” Lawrence said, noting that a medical withdrawal protects their grade point average.

Omala Snyder, a member of the Class of 2024 who was close with one of the students who died, said she thinks the college administration has shown a “lack of care” for her friend, the other students who died and for students like her who are left with their grief.

Snyder said she wants administrators to reach out to the friends of the students who died to understand the impact of the loss on their lives. She also would like them to make an effort to relax some academic demands in light of their grief.

“Dartmouth is a very high-achieving, stressful school,” Snyder said. There’s “pressure to perform at a high level. That is impossible when I’m thinking about the loss of people I love. They haven’t really given us any time to grieve.”

She said she thinks it would be appropriate for the school to cancel their upcoming exams and make courses pass/fail.

Last Monday, the Student Assembly sent a message to school administrators asking that the college cancel Tuesday classes and Wednesday’s academic obligations for members of the Class of 2024 to allow them to grieve.

“As we approach the end of the term, it is imperative that students are provided with the space to process, grieve, and reflect with one another,” the Student Assembly wrote. Administrators denied the assembly’s request.

Following discussions with faculty leaders, the administrators “unfortunately concluded that we cannot cancel classes or otherwise excuse all students from academic work this week,” according to the response from Hanlon, Helble and Elizabeth Smith, dean of the faculty.

They cited “concern about the impact on student learning” at the end of the term and said they asked faculty to work with individual students who would benefit from additional time to complete assignments and provide flexibility.

“We are confident that faculty will be supportive and compassionate in considering the circumstances of individual students,” they wrote.

Snyder said the college’s COVID-19 restrictions have had the effect of isolating students and have also disrupted their learning.

“Remote learning is just not ideal,” she said.

Like Snyder, Khan also said that COVID-19 testing and restrictions has been a “huge source of stress” this year, pointing to isolation, as well as confusion over changing policies.

But, given her own challenging mental health experiences well before the pandemic, Khan said, “I think COVID is exacerbating preexisting issues.”

Snyder also said she feels that there are times the college has used COVID-19 as an excuse.

“In the wake of one of the passings, we really fought very hard for Dartmouth to arrange a memorial for our best friend that we lost,” she said.

But administrators sought to postpone a memorial until the fall rather than having it in the spring, citing COVID-19 restrictions, she said.

Snyder said she was angry and frustrated that it took another death to prompt the school to hold a memorial, which it did last Tuesday.

The outdoor event on the Dartmouth Green drew a crowd of about 1,000. The large event was allowed to happen in spite of campus rules that continue to restrict the size of gatherings to nine people in informal settings and 25 for scheduled, formal events.

Those restrictions are slated to be relaxed somewhat beginning June 1.

The vigil included friends of the deceased sharing memories, as well as words from Dartmouth Chaplain Daveen Litwin and Hanlon, the Dartmouth president, and a marking of the one-year anniversary of the murder of George Floyd. Attendees lit candles as The Rockapellas a cappella group sang the song Testimony. There was a moment of silence, and the Baker Library bells tolled.

Jack Heaphy, a freshman, shared memories of Tiffany, his first friend at Dartmouth, during the vigil.

“Nothing has been the same since his passing, but his memory lives in all of us and not a day goes by that I don’t desperately miss him,” Heaphy said.

MARQUETTE — There’s never a bad time to think about your mental health: Where it stands, how you can improve it, and where to go for help if you need … END_OF_DOCUMENT_TOKEN_TO_BE_REPLACED