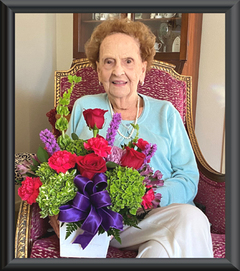 Funeral services for Vernell Conner Thomas, 99 of Palestine, will be held at 11:00 a.m. on Friday, May 21, 2021 at the First Baptist Church of Palestine. The Rev. Tony Watson will be in office. Burial will follow at Roselawn Park. The visit will take place one hour before the service at the church. Arrangements have been entrusted to the Bailey & Foster Funeral Home.
Mrs. Thomas died on Tuesday, May 18, 2021 in Tyler. He was born on February 23, 1922 in Hemphill, Texas, to Starling and Lorena Conner.
On October 11, 1945 she married LG Thomas, also of Hemphill.
Dr. and Mrs. Thomas lived in San Antonio after the marriage, while LG completed Chiropractic College.
In 1949, they settled in Palestine, Texas, where she worked with her husband to establish her chiropractic practice. She was mainly a housewife.
Dr. and Mrs. Thomas was active in activities and ministries of the First Palestinian Baptist Church, where they had been members since 1949. They both cherished the special relationships they established and maintained over the years with their patients, friends, neighbors, and their families.
Mrs. Thomas was preceded in death by her husband, her parents and sisters, Rosa Lee Smith, Clarice Clark and Leta Corley.
She is survived by her daughter Lauren Jean Karch and husband Bob, as well as numerous nieces and nephews.
Don Rice, Ricky Naismith, Martin Lawrence, Steve Bolt, John Weber and Benny Toole are the barn bearers.
Mrs. Thomas’s nephews Ed Corley, James Corley, David Corley, Terry Carter, Robert Thomas, Randy Thomas and Bobby Smith will serve as honorary bearers.
To view the condolences online or sign the guestbook, go to www.baileyandfosterfuneralhome.com.

MARQUETTE — There’s never a bad time to think about your mental health: Where it stands, how you can improve it, and where to go for help if you need … END_OF_DOCUMENT_TOKEN_TO_BE_REPLACED