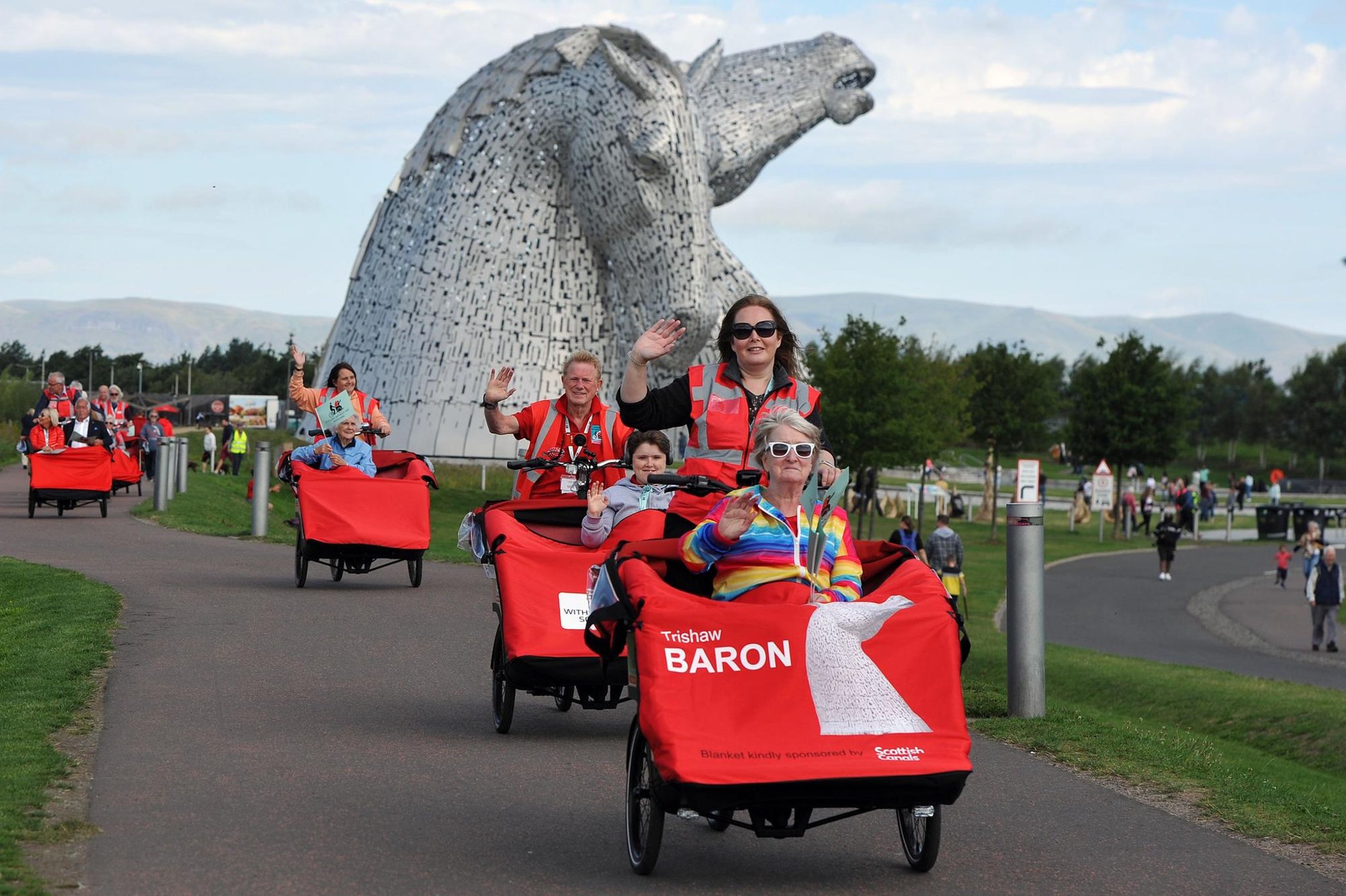 Cycling Without Age Scotland (CWAS) has expanded its network of three-wheeler trishaws to most of the country, enabling older and disabled people to be taken for rides by volunteer “pilots”.

Scotland’s 90 electrically-powered tricycles, which can carry two passengers, have clocked up 30,000 trips, while there are only about 25 in use in England and Wales.

The i newsletter cut through the noise

They are part of a network founded in Denmark in 2012 across more than 50 countries comprising 3,500 trishaws which have carried nearly 2 million people.

The initiative took off in Scotland after catching the public imagination four years ago when a video of Fraser Johnston, one of the pilots, taking elderly people on rides became an online hit and has since notched up more than 50 million views.

The pilots ride at walking place, enabling their passengers to chat to passers-by, which is made easier by being seated at the front of the trishaw and higher up than if they were in a wheelchair.

Among around 5,000 people to have benefited from the service in Scotland, a 95-year-old man said the trip had been the most alive he had felt in 15 years, and the first time he had been able to go out and buy a couple of tea in that period.

Other passengers have burst into song, such as tunes from their childhood, which has even helped bring people with dementia together.

CWAS chief executive Christine Bell said: “They can sit in the trishaw as strangers and leave as long-lost friends.”

She said getting out from often overheated care homes had led to passengers finding they got a great night’s sleep afterwards.

Families of residents are encouraged to become pilots and for grandchildren to tag along on their own bikes.

Ms Bell said: “It’s a different visit altogether than sitting looking for conversation – it can really liven up the whole family’s experience.”

Some 60 per cent of pilots are female, many of them middle-aged or older, age groups and gender under-represented in cycling, and most had not previously cycled.

Ms Bell: “It’s been an eye opener in that respect.

The electric trishaws are ridden at walking space so passengers can chat with passers-by. Picture: John Devlin

“I think women are attracted to become pilots by having a caring instinct, such as the opportunity to do something for their own loved ones.

“The trishaws are also attractive to non-cyclists because they are a lot more stable than bikes, don’t require balance and are electric, so it’s all pleasure and none of the pain.”

The £8,500 trishaws are paid for through fundraising by local groups, or “chapters”, as the Danish body which oversees the scheme calls them.

Support from the Scottish Government since 2018 – the only one in the world to provide funding – has enabled the network to grow by paying for the administrative and regulatory requirements.

Cycling with the elderly scheme to go Scotland-wide

Following the post-lockdown resumption of rides in June, the 54th Scottish chapter is due to be launched this month on the Isle of Cumbrae by retired pharmacy staff member and pilot Eileen McAulay.

Mrs McAulay, who accompanied her 101-year-old mother Mary McKell on a ride through Glasgow Botanic Gardens last week, said she enjoyed the fresh air and exercise it provided.

‘We don’t have to do any pedalling’

She said: “It’s absolutely fantastic both being a passenger and a pilot.”

Mrs McKell, a former district nurse, from Stenhousemuir, said: “it’s very comfortable and we don’t have to do any pedalling.”

They were piloted by retired neonatal intensive care midwife Shauna Brown, “captain” – another Danish term – of the The Helix chapter in Falkirk, which was launched last month.

She said: “It’s such fun and is making a difference to people at the same time.

“We are part of people’s memories.

“I’m not a confident cyclist at all, but this is ideal.”

Public health, women’s health and sport minister Maree Todd said: “I am delighted that Cycling Without Age Scotland continues to provide opportunities through their volunteer cyclists so that older people across communities in Scotland can enjoy the health and social benefits of being outdoors.

“This Government is committed to supporting women and girls to participate in being active and I am really encouraged to learn that more than half of the volunteer pilots are women.

“Opportunities like this for women are so important to help build and maintain physical, mental and social health throughout their life.

“With recent success at the Olympics and Paralympics in cycling, I hope that more people will feel inspired to get involved in projects such as this.”

Graham McQueen, of Paths For All, said: “It is not just the pioneering and unique nature of its trishaw rides that makes Cycling Without Age Scotland stand out.

“The project enriches, enhances and extends the lives of so many people who have mobility issues or other disabilities, unites generations and people from all walks of life, and plays a significant role in inspiring large numbers of people to become more physically active.”

Active Nation Commissioner for Scotland Lee Craigie said: “Women and girls tend to express more social and community-based motivations for riding bikes instead of – or as well as – the more obvious mental and physical health gains.

“The wonderful volunteers and staff at Cycling Without Age Scotland know that making your heart, lungs and legs work makes you feel good physiologically but so does doing something altruistic for someone else.

“It benefits the volunteer on all of these levels and reminds us of the important things in life: connection, mutual care and community.”

A message from the Editor:

Thank you for reading this article. We’re more reliant on your support than ever as the shift in consumer habits brought about by coronavirus impacts our advertisers.

If you haven’t already, please consider supporting our trusted, fact-checked journalism by taking out a digital subscription.

MARQUETTE — There’s never a bad time to think about your mental health: Where it stands, how you can improve it, and where to go for help if you need … END_OF_DOCUMENT_TOKEN_TO_BE_REPLACED