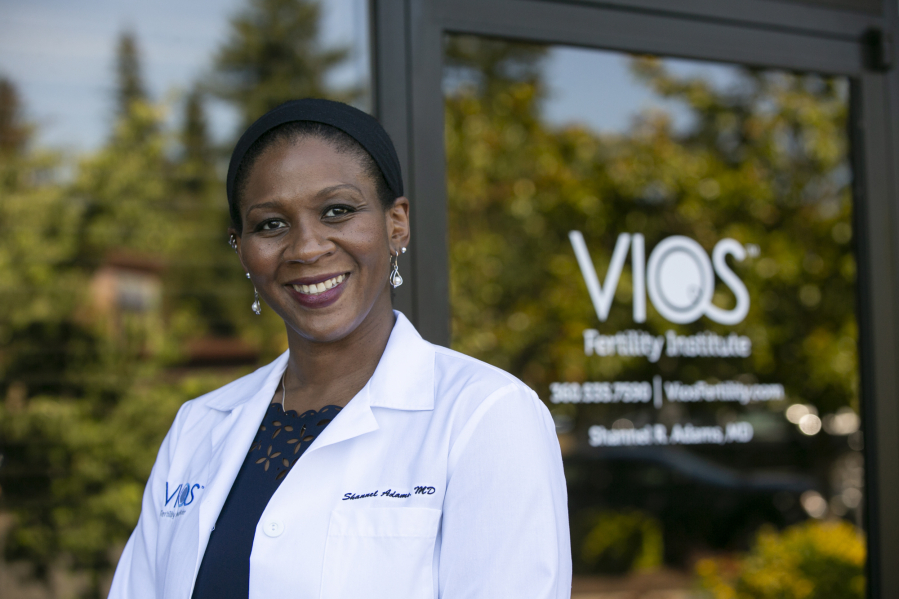 Dr. Shannel Adams is Vancouver’s newest fertility doctor — so new, in fact, that the building she will be practicing at hasn’t officially opened yet.

She will be the primary doctor at the Pacific Northwest branch of the Vios Fertility Institute, which plans to open its doors later this month.

But Adams has a message for all the concerned parents and parents-to-be who have approached her “every single day” with the same question during the COVID-19 pandemic: No, there is no evidence that vaccines cause infertility.

“I recommend, along with Vios and the American Society of Reproductive Medicine that all women attempting to conceive, who are pregnant and who are post-partum, to get the vaccine,” Adams said.

Her message is in line with what the Centers for Disease Control and Prevention announced on Aug. 11.

Number of employees: 10 at the Vancouver location.

Bureau of Labor Statistics job outlook: OB-GYNs fall under the more general physicians and surgeons in the bureau’s Occupational Outlook Handbook. Overall employment of physicians and surgeons is expected to grow 4 percent through 2029. The average salary of obstetricians and gynecologists in the Portland-Vancouver-Hillsboro, Ore. metro area was $118.25 per hour or $245,960 per year.

“CDC encourages all pregnant people or people who are thinking about becoming pregnant and those breastfeeding to get vaccinated to protect themselves from COVID-19,” CDC Director Dr. Rochelle Walensky said in a news release. “The vaccines are safe and effective, and it has never been more urgent to increase vaccinations as we face the highly transmissible delta variant and see severe outcomes from COVID-19 among unvaccinated pregnant people.”

“Pregnant women are a high-risk population; they are more likely to have severe illness that could include ICU intubation or death,” Adams said.

The Vios Institute — “vios” meaning “life” in Greek — was started in 2016 and has expanded to include six clinics. The Vancouver location will be the first on the West Coast. Adams, who grew up in North Portland, started working there after earning her medical degree from Oregon Health & Science University.

The Columbian caught up with Adams to learn more about her and her work.

How often are you hearing from people about COVID-19 vaccines and fertility?

Every single day. Every day. I would say at least half of our patients have already received a vaccine. Every single day we are asked that by patients who are trying to conceive. Though social media is very important for education, there is a lot of misinformation. As a provider, it’s our job to give people the evidence that’s out there. I try to give them evidence-based recommendations.

What do you tell them?

In terms of data, although there’s a small amount of data, it’s all positive, meaning there is no effect on fertility. All the data we do have is that the vaccines are safe in pregnancy. There could be antibodies that can be passed on. There have been no changes in terms of people who were vaccinated versus those who were not. All the data we have out there show that the benefits of the vaccine are very important.

Why did you pursue this line of work?

I was drawn to women’s’ health because I’m from a family with a lot of women. It’s kind of a more matriarchal family. Who else is better to take care of a woman than a woman herself? I got interested in medicine. When I was in residence — in medical school, I loved my OB-GYN rotations because I think it’s a wonderful space; you can live with patients and develop relationships. I like that there’s continual care, you are a part of their family. You help people to reach their ultimate happiness. It makes me feel blessed to be a part of that.

What are some of the most common issues you are coming across in your job?

It’s a wide variety. A lot of women don’t even know how their bodies work. One out of eight women are suffering from some form of infertility. So I help educate them about their normal cycles. The most common is ovulation dysfunction. A lot of people ask, when is the best time to conceive? Am I actually ovulating and releasing an egg? As our society changes and women are in the professional sphere, I have ladies who are coming in and they are considering having families but haven’t quite decided whether they want children. A lot of people don’t realize they have the ability and options to freeze eggs and be successful in the future.

What has your experience been like as a woman of color in this line of work?

In general, about 2 percent of doctors are African American women; even less so in fertility. I would say at least for fertility, a lot of the disparities stem from people not feeling comfortable. My goal is to always make those around me — whether they’re African Americans or other people of color — comfortable and know it’s a safe space. My goals are usually mentorship. I would love to continue to mentor younger doctors of color in the area. I think it’s important if people stay local if they can. My hope is in the future to be able to align with different foundations for fertility grants. A lot of time that may be a limiting factor for people of color.

Studies out there show that women of color have higher rates of infertility. Why?

For fertility at least, it’s education. It’s also the misconception that people of a different ethnicity are more fertile, so they seek help later. The later you seek help, the harder it sometimes is. It’s also doctors not understanding the cultural needs of the person coming in.

What are your hopes for the future?

I hope to really expand the Vios clinic family in the Northwest. I’d love to have more than one clinic serving the metro area that will go with the Vios model in terms of having patient-centric cutting edge technology to serve the community I grew up in. I’ve always been drawn back to home specifically because I think the Pacific Northwest is a unique area with a very special patient population and great, kind people who are open to many things.

MARQUETTE — There’s never a bad time to think about your mental health: Where it stands, how you can improve it, and where to go for help if you need … END_OF_DOCUMENT_TOKEN_TO_BE_REPLACED