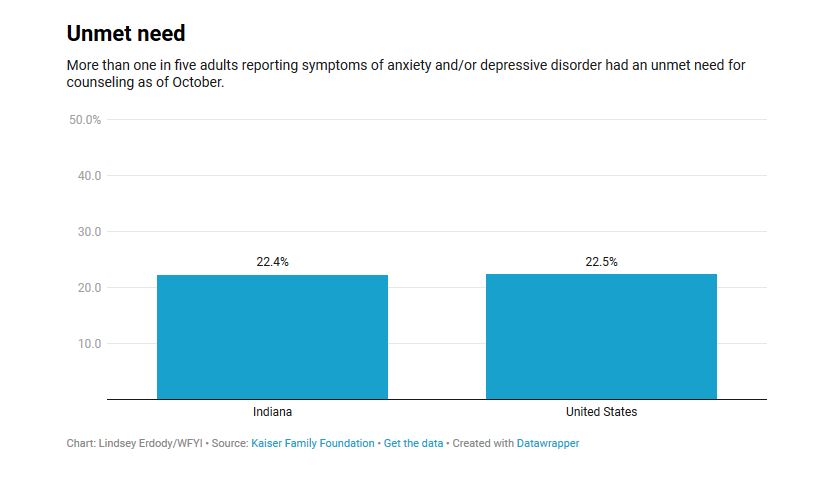 INDIANAPOLIS — Noelle Broughton is an accomplished student. She’s in a graduate program at Indiana University-Purdue University Indianapolis and is headed for a PhD.

Listen to this story here.

She also struggles with anxiety and self-doubt. As a child, she had a few therapy sessions, but they didn’t last. Now, at 25, she wants to try treatment again before heading to the University of Kansas for her doctorate in public administration.

“But then once I actually took the step to do so, I realized how difficult it is,” Broughton said. “It feels impossible at times.”

Broughton has been looking for a mental health provider who is female, a person of color and in-network with her health insurance. She’s had no luck in the past year.

“I feel like every time I find someone who checks two of those boxes, maybe they don’t check the third box,” Broughton said.

So, as she prepares to move west, she questions whether seeking treatment is worth it.

She’s not alone — many other young adults face similar problems when it comes to mental health services, especially when they suddenly lose the support of school counselors.

Jedediah Carter grew up in a rural town with limited mental health care, but family support helped him get through high school. When he moved to Indianapolis for college, he wasn’t ready for the academic challenges and being on his own.

“It’s tough to, you know, be out as a young adult trying to navigate this brand new world for the first time,” Carter said.

Carter, now 24, is taking a break from school to regain control of his mental health. Finding care for depression and anxiety hasn’t been easy.

While taking classes, he could use IUPUI’s mental health services. But now that he’s not enrolled, he has lost access to that, and he has struggled to find a provider on his own.

“It feels like you are being forgotten or left, you know,” Carter said. “Because there’s nobody returning your calls. But I was like feeling a little bit of a crisis that I needed to get this started or things were only going to get worse.”

There’s a term for Broughton, Carter and others like them — transitional young adults, who are age 16 to 26 and graduate high school, attend college or enter the workforce.

Dr. Anita Everett of the Substance Abuse and Mental Health Services Administration says this all heightens the risk of mental illness.

“We know that people are making decisions that could impact the rest of their lives and things like that, there’s a lot of sort of stress and a lot of pressure on individuals in that age group,” Everett said.

Nance Roy is a psychologist with the JED foundation, which supports the emotional health of young adults. She said insurance plays an important role in getting treatment.

“If you do have insurance, then at least you have the structure of being able to go online or pick up the phone and call the number on the back of your card,” Roy said.

But Roy said it can still take a long time to find a provider that is taking new patients, because there aren’t enough providers.

A Kaiser Family Foundation study found that in Indiana nearly a quarter of adults with symptoms of depression or anxiety had an unmet need for counseling or therapy. And a University of Michigan study found there are only six psychiatrists in Indiana for every 100,000 people. Both trends line up with national data.

“And the whole concept there is to identify that as early as possible and help those kids, those people, young adults get back on track,” Everett said.

Carter spent six months searching for a provider. He finally made an appointment, but he knows he’s lucky to still be on his parent’s insurance.

“I really can’t imagine the struggle that someone could have had who isn’t in my situation,” Carter said. “Because I do feel like the system is way harder than it needs to be. Especially for, you know, I think something that is essential.”

Darian Benson is a reporter for Side Effects Public Media and WFYI in Indianapolis. She can be reached at dbenson@wfyi.org.

MARQUETTE — There’s never a bad time to think about your mental health: Where it stands, how you can improve it, and where to go for help if you need … END_OF_DOCUMENT_TOKEN_TO_BE_REPLACED