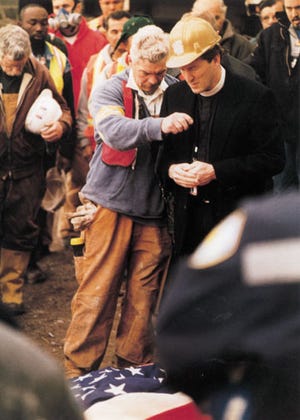 In 2001, Lyndon Harris was serving as priest in charge of St. Paul’s Chapel, an Episcopal chapel directly across the street from the World Trade Center. Harris was there when the terrorists attacked and the Twin Towers collapsed.

For the next eight months, he served first responders and emergency personnel by setting up a relief mission, providing a safe haven from the devastation at Ground Zero.

He and a team of volunteers worked tirelessly to provide over a half million meals, chiropractic care, grief counseling, religious services and even concerts for the 9/11 workers.

For the 20th anniversary of the Sept. 11th attacks, Harris, of Zirconia, will return to Saint Paul’s, to be a part of the Calling of Names Ceremony, and to offer a reflection for the volunteers.

Harris now serves as the minister of the Unitarian Universalist Fellowship of the Carolina Foothills, a congregation with members from several towns along I-74 and I-26.

On Sunday, Sept. 5 at 10:30 a.m., he will share stories and lessons from his harrowing experience and its aftermath. The event will take place at the Whimsical World Gallery on 116 Jones St. in Landrum, South Carolina.

In the 20 years since the World Trade Center disaster, Harris has dedicated his time and energy to a mission of Forgiveness, and inspired the creation of “Gardens of Forgiveness” in several countries. There’s even a local one in Zirconia, where Harris and his wife, Maria, now call home.

He continues to serve as speaker, coach and workshop leader to churches and organizations around the globe.

More information about Harris and his work can be found at www.LyndonHarris.com. The UU Church of the Carolina Foothills, www.uufcf.org, meets the first and third Sundays of each month at the Whimsical World Gallery.

MARQUETTE — There’s never a bad time to think about your mental health: Where it stands, how you can improve it, and where to go for help if you need … END_OF_DOCUMENT_TOKEN_TO_BE_REPLACED